Starlings put on their own dance show in the sky just outside Carrick on Shannon. 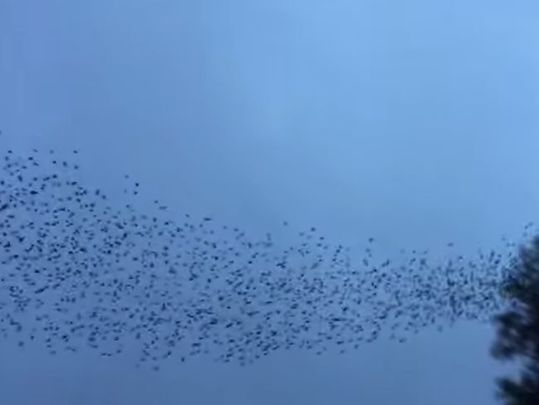 Starlings put on their own dance show in the sky just outside Carrick on Shannon. YouTube

An Irish dance teacher captured the most amazing display, a murmuration of starlings, near Carrick on Shannon, County Leitrim.

Edwina Guckian, an Irish dance teacher had been running the Sean Nós ar an tSionann dance club for the past 13 years, spotted this natural phenomenon in the sky as she walked out of her evening class on a June evening, in 2015.

Guckian told IrishCentral, “I was just coming out of the end of year show at my dance club Sean Nós ar an tSionann.

“We were all coming out of the hall after a few hours of lots of fun and dancing and there were the birds doing their own dance for us!”

The Irish dance teacher was so stunned by the vision that she uploaded it to YouTube along with harp music by Laoise Kelly, from Achill, County Mayo.

What Guckian recorded was thousands of tiny starlings battling for survival. The birds swirl and loop about the sky in a battle to determine the weakest of the flock and who is a target for predators.

Each bird tries to copy the bird next to it causing this amazing rippling effect. The flock reaches speeds of up to 20 mph.

This murmuration usually takes place at the beginning of winter, just before dusk, when the birds will look for a place to roost for the night.

Daniel Butler in the Telegraph described the natural wonder of murmurations. He said, “Each bird strives to fly as close to its neighbors as possible, instantly copying any changes in speed or direction. As a result, tiny deviations by one bird are magnified and distorted by those surrounding it, creating rippling, swirling patterns.”

He continues by explaining the birds reasoning behind this strange fight for survival. He said, “Starlings are tasty morsels for peregrines, merlins, and sparrowhawks. The answer is to seek safety in numbers, gathering in flocks and with every bird trying to avoid the edge where adept predators can sometimes snatch a victim.”

This isn’t the first recent murmuration video from Ireland that has gone viral.

Here are some others: