Wild Ireland, an animal sanctuary in Co Donegal, welcomed six wild boarlets in May 2020, thought to be the first wild boar born in Ireland in eight centuries. 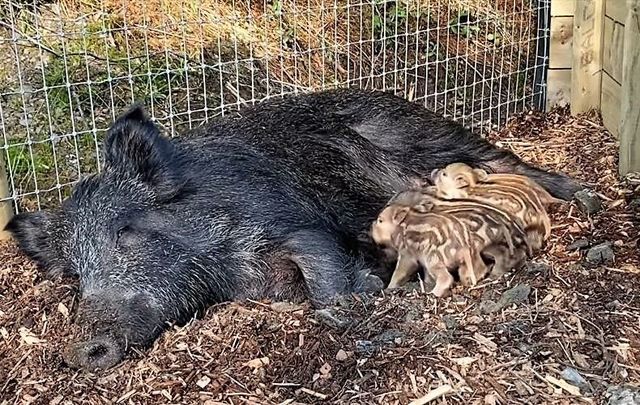 Wild Ireland, an animal sanctuary on the Wild Atlantic Way in Co Donegal, was delighted to welcome the birth of six wild boarlets late last month.

The birth of the six wild boar, an animal native to Ireland, is thought to have been the first birth in the country for some eight centuries.

Killian McLaughlin, the owner and operator of Wild Ireland, which only opened in Burnfoot, Co Donegal in October 2019, told Donegal Daily that his sanctuary took in the boarlets’ mother, Tory, in January.

McLaughlin said: “When we got her the caveat was that she had been with a male so the chances were that she might be pregnant. We were watching her like a hawk.

“She came to us on her own, which is not ideal because boar are very social animals. It’s nice now we’ll have our very own sounder (family of boars) at Wild Ireland.

“We don’t encourage breeding here because then we’ll be looking for homes for our own animals, but in the circumstances, we are delighted she has her own little family.”

McLaughlin announced the exciting birth in a video he shared on May 1:

Wild Ireland has been closed since March due to the coronavirus pandemic, placing great financial strain on the operation.

McLaughlin said: “We now have no income but we have the same outgoings. The staff are still looking after animals and we are still buying the food. They all get fresh fruit and veg from the wholesalers, not supermarket leftovers, it has to be fresh for their nutrition.

“It’s not easy but I’ve tried to move online to try and generate some income.”

Supporters, some of whom have helped Wild Ireland via donations, are able to buy stuffed toys in the likeness of the sanctuary’s residents, and can also purchase “flexitickets” that can be used anytime this year once Wild Ireland reopens.

McLaughlin also told The Independent: “It’s fantastic that people are interested in Wild Ireland and I was delighted to share it. It was never opened as a business. It’s an animal sanctuary. A big part of what we do is letting kids see the animals in the wild. That makes a big impression on young minds and inspires a new generation of conservationists. It’s so important when we are all so disconnected for the natural world.”

McLaughlin said that he and his staff are self-isolating so they can continue to care for the residents at the 23-acre Wild Ireland, which include lynx, bears, wolves, monkeys, and red deer.

“It’s easy to keep going because of the animals,” McLaughin said, “keeping them healthy and well looked after is a nice distraction from all the doom and gloom.

“The birth of the boars is a glimmer of hope amongst everything else. It’s given us all a lift.”