A fox was caught on video roaming Dublin’s empty Grafton Street last week, and has since been spotted multiple times out and about around the city. 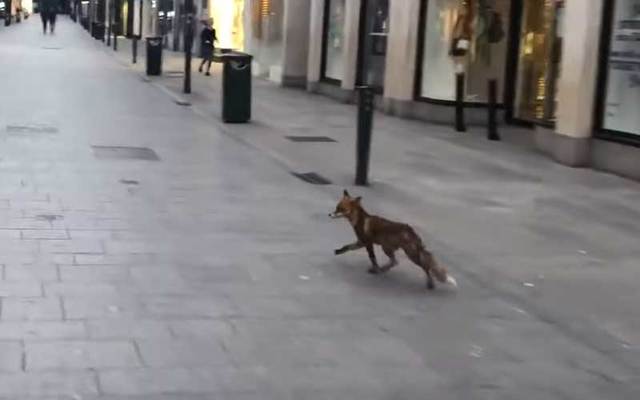 A fox was caught on video roaming Dublin’s empty Grafton Street last week, and has since been spotted multiple times out and about around the city.

The fox was spotted on Grafton Street on Tuesday, April 28. Dublin’s main retail area would normally be busy during the early evening with shoppers, buskers, tourists, and people on their way home from work, but due to COVID-19 restrictions, Grafton, like similar streets around the world at the moment, was empty.

Read More: The secret world of the beautiful wildlife and animals in Dublin city

Footage posted on social media shows the animal trotting past Brown Thomas and Mark & Spencers, before taking a turn on Dawson Street. The fox can be seen strolling nonchalantly past the few human passers-by on the street, Extra.ie reports.

On Friday morning, May 1, the same fox was seen again, this time caught, by a photographer, on Fleet Street with a pigeon in its mouth.

The Irish Times has identified the now famous fox, which reportedly has been given a name.

According to Trinity College Dublin zoologist Collie Ennis, the fox, which is about 11 months old, is named Sam. The fox’s parents inhabit a territory around Merrion Square.

Ennis says Sam, whose sex is currently unknown, has reached the age where "he" has been been kicked out of the den.

The fox was filmed on Grafton Street last week strolling in the early afternoon in a thoroughfare that would normally be thronged with shoppers https://t.co/WOT2nLtSnK

“All the time now at Trinity, you see him sitting at Lincoln Place gate at the dental hospital mournfully looking towards where Mammy and Daddy hang around. That’s why he’s out and about in the city centre during the day looking a bit panicked,” explained Ennis.

“We were concerned that he was not eating, but we can see from the photograph that there is no need to be concerned. They are incredibly adaptable animals. They can switch from McDonald’s leftovers to killing rats and pigeons within days which is exactly what happened.”

Since the coronavirus pandemic began, there have been a number of unusual animal sightings reported in cities around the world. In Wales, a flock of sheep were spotted peering into a shuttered McDonalds, while another town was taken over by a herd of wild Kashmiri goats.