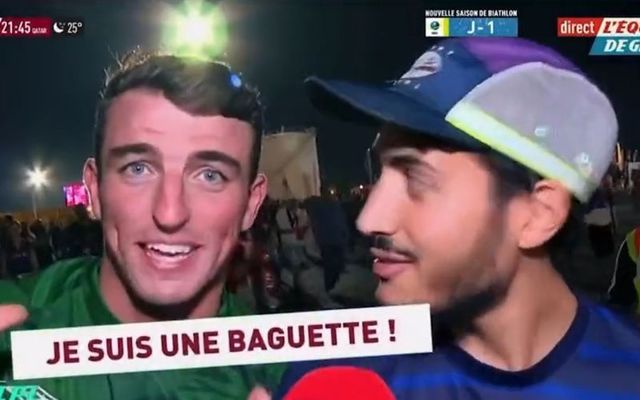 What's a major sporting event without a bit of craic from the Irish fans?

Irish man Eddie O'Keeffe is going viral after crashing a live French interview at the World Cup in Qatar.

O'Keeffe, donning an Ireland football jersey, rushed in front of the camera during a live L'Équipe interview and proudly proclaimed "Je suis une baguette!" which means "I am a baguette!"

"He is Irish, he's out of it and crazy," the French interviewee remarked afterward, according to some translations.

A clip of O'Keeffe, the so-called "baguette lad," was shared by the French comedian Pierre-Antoine Damecour on Twitter and is going wildly viral having racked up more than 3 million views:

Today FM managed to track down O'Keeffe, who is a native of Kilfinane in Co Limerick and has been living in Dubai for more than a year where he works as an engineer. He arrived in Qatar on Friday night and crashed the French interview the following day.

“It’s mental, my phone has been hopping!" O'Keeffe told host Ray Foley. "I can’t even do a day’s work here!”

The newly famous Irish man joked: “My mother’s disgusted with me! She doesn't get it - she's seen all this stuff online."

As the eagle-eyed folks over at Balls.ie pointed out, two other Irish fans can be spotted in the massively viral clip wearing “retro Offaly and Wexford jerseys.”

The Irish star of the 2022 World Cup, the 'Je Suis Baguette' lad, has sent us this behind-the-scenes video of the moments before the L'equipe interview 😅 pic.twitter.com/GW9gLL32H6

Not surprisingly, “baguette lad” isn’t the only Irish fan that’s been spotted at the 2022 World Cup. Irish Twitter user Ciarán Peelo shared this snap of an Offaly fan at the Belgium - Canada match:

Last thing you’d expect to see at a Belgium and Canada match is an Offaly jersey😂 pic.twitter.com/hYZzwwxXxq