There are very few places where I would not travel to support Ireland, but Qatar is one of them. 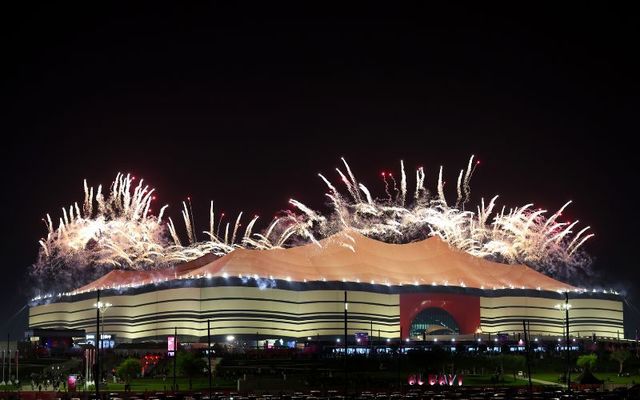 Fireworks explode during the opening ceremony prior to the FIFA World Cup Qatar 2022 Group A match between Qatar and Ecuador at Al Bayt Stadium on November 20, 2022, in Al Khor, Qatar Getty

Ireland has not qualified for the ongoing 2022 World Cup in Qatar, which is taking place amid concerns about human rights abuses and the country's treatment of members of the LGBTQ+ community. Are we better off?

I remember watching on forlorn as a teenager when France beat Ireland in a World Cup play-off in 2009. The feeling of dejection stayed with me for weeks, not just because Ireland had lost but because they would, once again, not be participating in a World Cup finals.

Ireland has only qualified for one World Cup in my lifetime – in Korea and Japan in 2002 when I was too young to fully appreciate what was happening – and I have spent much of the last 20 years hoping that they would qualify for another one.

It is the biggest sporting event in the world, a festival of football when even non-football fans become enthused by the spectacle for a few weeks.

I have spent an unholy amount of money flying around Europe to watch Ireland in their unsuccessful attempts to qualify for a World Cup over the past two decades and can still feel the despair I felt when Ireland were undone by Denmark in the play-offs for the last World Cup in Russia – another tournament that should never have been allowed to happen.

However, I felt none of that despair as Ireland’s bid to qualify for the ongoing World Cup in Qatar unraveled last year.

That is partly because Ireland have regressed at an alarming rate over the last five years and are no longer really capable of qualifying for the World Cup. It is also because I felt no excitement about a World Cup in Qatar. In fact, I felt nothing but disgust that the biggest event in the world of sport was being held in such a country.

There are very few places where I would not travel to support Ireland, but Qatar is one of them.

There is a litany of reasons why this World Cup should not have been hosted in Qatar, but chief amongst them is the appalling treatment of migrant workers in the construction of stadiums and other infrastructure in the build-up to the tournament.

More than 6,500 migrant workers from some of the poorest places in the world, including Bangladesh, Sri Lanka, Pakistan, and India, have died since Qatar controversially won the rights to host the 2022 World Cup in December 2010 – an average of roughly 12 per week over the past 12 years.

It is difficult to put an exact figure on that total because the Qatari Government has only admitted to three World Cup-related deaths, a figure disgracefully paraded by world soccer’s governing body FIFA.

Even if there were no migrant worker deaths in the lead-up to this tournament, the treatment of migrant workers has been abhorrent, with human rights organizations describing it as “modern-day slavery”.

Migrant workers have reportedly paid extortionate (and illegal) recruitment fees to secure jobs in Qatar for the World Cup, leaving them in crippling debt and stuck in exploitative jobs as they attempt to pay off their debts.

According to widespread reports from human rights organizations, they work long hours in the searing heat for a paltry salary. They often live in crowded conditions with no air conditioning and very few days off.

Until very recently, migrant workers were recruited under the notorious Kafala System, which has allowed many of the oil-rich gulf states to make use of cheap labor.

The system gave companies almost total control over migrant workers, with workers requiring a sponsor’s permission to enter and exit the country, change jobs, or leave the workplace. Leaving the workplace without permission, even if a worker is fleeing abuse, is an offense deemed punishable by the termination of a worker’s legal status, leading to deportation or imprisonment.

Migrant workers are also afraid to speak out against their employers out of fear of recrimination, according to widespread reports.

Qatar’s recent U-turn on the sale of alcohol also raises significant concerns about what will happen to the modest gains that immigrant workers have made once the World Cup is over.

Made on the eve of the World Cup, the decision to ban the sale of alcohol at World Cup stadiums is not the biggest issue in isolation, but it highlights a more pressing issue - Qatar’s failure to honor commitments made when it bid for the tournament 12 years ago.

What is to stop it from reversing its decision to repeal Kafala once the World Cup is over and the media has left town?

And to make matters much, much worse, Qatar is a country with a population of just under 3 million people and little football heritage. What need will it have for eight state-of-the-art stadiums all located within a few hundred miles of each other once the World Cup is over?

That is not to mention the environmental impact that a $220 billion project like this will have, with air-conditioning pumped to the maximum to keep open-air venues like stadiums and parks cool enough for visitors.

Qatar has promised to welcome all people to the 2022 World Cup, but LGBTQ+ people could hardly have felt welcome when Qatari World Cup ambassador Khalid Salman described homosexuality as “damage in the mind” just days before the World Cup started.

They could hardly have felt very welcome when hearing reports of US journalist Grant Wahl being detained by Qatari security staff for half an hour when trying to enter the USA versus Wales game because he was wearing a rainbow t-shirt.

Reports of Brazilian journalist Victor Pereira having his phone seized after Qatari officials mistook a regional flag on his phone for a Pride flag could hardly have made them feel welcome either.

Those who defend Qatar point out that homosexuality is outlawed under Qatar’s law and that those laws and cultures should be respected by everyone who is visiting the country, but that simply doesn’t stand up to scrutiny.

Qatar opened itself up to people of other cultures the minute it bid for the World Cup – a global event for people all over the world. If it was not prepared to accept people from different cultures, it should never have been given the World Cup in the first place.

But it has, and FIFA has facilitated the country’s attitude to homosexuality, especially in recent weeks.

When seven European nations announced that their captains would wear an armband with the Pride colors, FIFA announced that each captain would receive a yellow card for the gesture. Imagine punishing a player (however mildly) for standing up for human rights.

Unfortunately, the seven nations wilted in the face of FIFA pressure and instead wore a banal “no discrimination” armband instead, an equally despicable act of cowardice.

All it would have taken was one football association to go ahead with the gesture anyway and take their medicine to show up FIFA for the farce it is.

Could you imagine the power of any image that showed a player being punished for standing up for human rights?  It would have gone global and remained an iconic image years after the World Cup was over.

There are many who accused the seven nations of trying to bring politics into football, but these people completely ignore the fact that sport is inherently political, especially events like the World Cup.

Every World Cup is hosted for political reasons, be they innocent reasons like trying to bring in tourism money and build stature around the world, or more nefarious reasons like the 1934 World Cup in Italy, which was used as a propaganda tool by Mussolini’s fascists.

Qatar, likewise, is not hosting the World Cup for the good of its health; it is doing so to launder its image on the international stage – a concept known as sportswashing – and to build soft power and security in a volatile region of the world.

A small, vulnerable country surrounded by more powerful enemies like Saudi Arabia, Qatar is now receiving visits from some of the most powerful leaders in the world and hosting some of the biggest stars in the world of sport. The World Cup has made it a genuine presence on the world stage.

The World Cup’s opening ceremony was also a highly political event, with Turkey’s controversial President Recep Tayyip Erdogan pictured sitting alongside FIFA President Gianni Infantino and the hugely controversial Saudi ruler Mohammed bin Salman. Those figures were hardly having a chat about the tactics on display during Ecuador’s dull 2-0 win over Qatar.

If political figures and entire countries can use sports as a political tool – often for nefarious reasons – why can’t players and teams use it as a force for good?

Qatar and FIFA have taken the most amazing spectacle in sport – something that comes around just once every four years – and ruined it. There is no place for the childlike innocence and wonder that the tournament usually brings.

Ireland was better off not qualifying for such a shameful spectacle.