Old Irish Goats mark Bloomsday with a frolic in Dublin 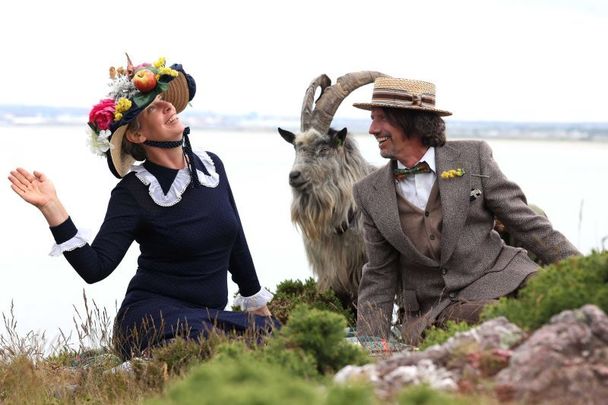 As fans of "Ulysses" gather in Dublin for Bloomsday in the centennial year of the novel’s publication, the Old Irish Goat Society marked the occasion by celebrating one of the famous scenes from the novel where the once-familiar silhouette of an Old Irish Goat appears and interrupts the courtship of Molly and Leopold on Howth Head.

In the novel, Leopold Bloom, while eating his famed Gorgonzola sandwich in Davy Byrne’s pub, recalls the day he proposed to Molly and the unexpected interruption of a goat.

Melissa Jeuken, Old Irish Goat herder, explains: “This interaction speaks so much to the goats’ inquisitive nature, which inspires them to check out unexpected visitors or scenes, in fact as a primitive breed that’s been less adulterated by humans, their high intelligence insists on enquiry, and their mostly gentle nature adds to their charismatic appeal.”

Some of the older generation of Howth recall childhood memories of the Old Irish Goats on the headlands. However, until the goats’ return in September 2021, these majestic animals were missing from the landscape for almost 70 years. Today the goats are back, with a very modern purpose.

Thanks to the collaborative efforts of Fingal County Council and their Biodiversity Officer, and Howth SAAO (Special Amenity Area Order), the Old Irish Goats have joined the fight to rebalance the eco-system of this important UNESCO site and taken up residence on the headland as conservation-grazers with the important task of helping to prevent gorse fires.

On June 9, the Old Irish Goat finally received Rare Native Breed Status from the Irish State, and it was noted that they are “at risk.” One hundred years ago, when "Ulysses" was first published, the Old Irish Goat population was more than 250,000, yet today, the Old Irish Goat is critically endangered. This ancient living relic, at this iconic headland, has survived almost unchanged - formidable lynchpins connecting back to the most unique parts of Irish heritage.

Ireland's Minister for Agriculture Charlie McConalogue said: “There are many factors such as cultural, historic, and genetic diversity that make the Old Irish Goat a unique breed with a rich history unique to Ireland.

“The Old Irish Goat is celebrated in Irish folklore, tradition, paintings and literature. By virtue of their hardiness, they provided a crucial component of Ireland’s past farming and rural life”

Back home on the headland that inspired James Joyce, a majestic form glides in and out of view amongst the heathers and ferns once again. A 5,000-year-old, almost forgotten piece of our ancient heritage is now reclaimed - hopefully never to be forgotten again.

You can follow along with the Old Irish Goat Society on Facebook and Instagram @oldirishgoatsociety, or visit the education centre and meet the goats in person at The Old Irish Goat Centre in Mulranny, Co Mayo.