Happy Bloomsday! Here's how you can join in on Ireland's most unique celebration

Bloomsday 2022, celebrating Irish author James Joyce and the centenary of his publication of "Ulysses," is set to be the biggest ever with plenty of global events. 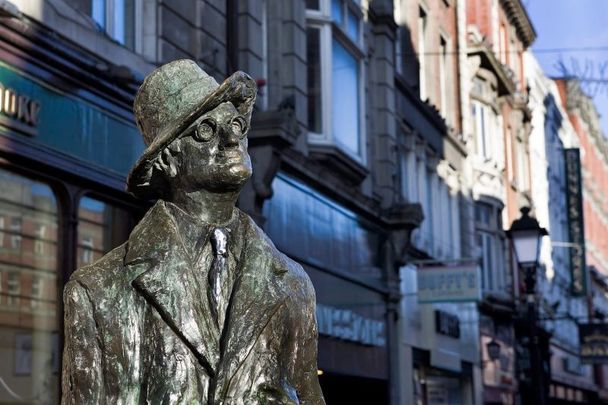 To mark Bloomsday 2022 (June 16) and the centenary year of James Joyce’s “Ulysses,” Ireland’s Department of Foreign Affairs (DFA) and its global network of Embassies and Consulates have collaborated with dozens of partners worldwide to present their largest global Bloomsday celebration to date.

"Hold to the Now," a new short film for Bloomsday, is a collaboration between the DFA and the Museum of Literature Ireland (MoLI) with 35 Irish Embassies and Consulates worldwide.

Filming took place across five continents, from Cairo to Kyiv, Austin to Abuja, Singapore to Santiago, and Berlin to Brasilia. Performers include actors Stephen Fry and Glenn Keogh ("Curb Your Enthusiasm"), leading Irish artist Amanda Coogan, and one of the world’s most eminent Joyceans, 94-year-old Dr. Fritz Senn, President of the James Joyce Foundation in Zurich.

"Hold to the Now," with an original score composed and performed by Cormac Begley, is now available to view here:

Ireland's Minister for Foreign Affairs and Minister for Defence, Simon Coveney, commented: "Our 2022 Bloomsday campaign is a global celebration of Joyce in this centenary year of the publication of ‘Ulysses’, embracing not only literature but film, visual art, performing arts and Irish studies.

Irish Embassies and Consulates are also marking Bloomsday 2022 with diverse events in collaboration with local partners. Joycean fans worldwide can enjoy an isiZulu performance of Molly Bloom’s soliloquy in Johannesburg, a Vietnamese version of "Dubliners" in Hanoi, newly commissioned Ulysses murals by acclaimed Irish artist Aideen Barry in Hungary, and by 18 universities across Brazil, a jazz-inflected Joycean song cycle in San Francisco, and much more.

Check out the full range of activities at Ireland.ie/Bloomsday.

To reach new global audiences as part of DFA’s Bloomsday campaign, Irish Embassies and Consulates have also organized a second annual Global Joycean Book Giveaway. Over the Bloomsday period, over 3,500 copies of "Ulysses," "Dubliners," and "A Portrait of the Artist as a Young Man" are being distributed across four continents in 12 languages ranging from Vietnamese, Indonesian and Japanese to Portuguese, Hungarian and Croatian. To deliver this, the DFA's diplomatic network has partnered with national and public libraries, secondary schools, universities, bookshops, literary cafés, and cultural centres, including remote libraries in the Australian outback and street cafés in Indonesia.

In Dublin, the Museum of Literature Ireland is hosting a programme of events throughout Bloomsday on June 16, while the Bloomsday Festival, presented by the James Joyce Centre, embraces an extensive range of programming from June 12-18, including film screenings, art exhibitions, and walking-and-sketching tours of the city. Find out more at BloomsdayFestival.ie, MOLI.ie, and Ulysses100.ie.

Bloomsday's "Hold to the Now" Performers (in order of location)