WATCH: Here’s what Bloomsday looked like 60 years ago in Dublin

This historic newsreel, presented by the Irish Film Institute, shows the dedication of the James Joyce Museum in Dublin on June 16 - Bloomsday - in 1962. 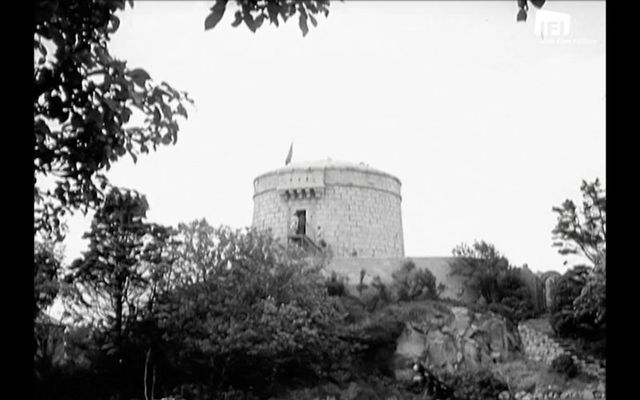 This edition of Gael Linn’s cinema newsreel records the opening on June 16, 1962 of the James Joyce Museum in Sandycove, Dublin where Joyce had spent time with Oliver St. John Gogarty in 1904.

Guest of honour is Sylvia Beach, the American who published "Ulysses in" 1922 under the imprint of her Paris bookshop, Shakespeare and Company.

The dedication of the museum was the culmination of the work of Michael Scott, John Ryan, Flann O’Brien, and others to honour Joyce in his hometown. The film also shows a number of Ulyssean locations such as Eccles Street and Mulligan’s Pub.

The Gael Linn Collection at the Irish Film Institute

In 1955 Ernest Blythe, Chairman of Comdhail Naisiunta na Gaelige, lent Gael Linn £100 to produce a short film for cinema and the Amharc Éireann (A View of Ireland) newsreel was born. From 1956 to mid-1957 Amharc Éireann consisted of short single story items that were distributed to cinemas throughout the country on a monthly basis. Their popularity was immediate and by mid-1957 the Rank Film Distributors agreed to supply them to Irish cinemas along with their own newsreel, at which point they became issued on a fortnightly basis. By 1959 the success of this home-grown newsreel resulted in it being produced weekly and it expanded to include 4 separate news stories. The series continued until 1964 when the immediacy of television as a means of relaying news to the Irish population rendered the newsreel obsolete.

Produced by Colm O’Laoghaire, a total of 267 editions of Amharc Éireann were made. Although Gael Linn’s Amharc Éireann production ceased in late 1964 its influence is ongoing. The range of Irish interest subjects covered (from hard news stories to more magazine-like items) provide a vivid window into the development of modern Ireland at a particularly progressive point in its development and provide a first-hand insight into the moral, cultural and economic development of the country throughout the Whittaker and Lemass eras.

"Bloomsday ’62 – Amharc Éireann: Eagrán 159" is published here with kind permission of Gael Linn and with thanks to the Irish Film Institute (IFI), who IrishCentral has partnered up with throughout 2022 to bring you a taste of what their remarkable collection entails. You can find all IrishCentral articles and videos from the IFI here.