The Old Irish Goats were transported to Howth Head in coastal Dublin in an effort to prevent future wildfires. 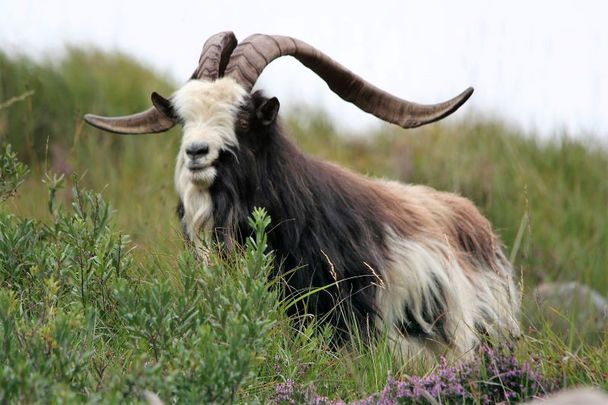 A herd of Old Irish Goats have been sent to Howth Head in an effort to prevent future wildfires.

This summer gorse fires raged across the Dublin landmark for six weeks, burning an area of approximately 65 acres, Journal.ie reported.

The Fingal County Council, along with the Old Irish Goat Society, decided to introduce a herd of goats to the area in order to reduce the vegetation overgrowth.

Goatherder Melissa Jeuken landed the job of tending to the 25 goats out of a pool of 100 other applicants.

We are delighted to announce that the ground-breaking conservation grazing project, with Old Irish Goats, on Howth Head, in the Dublin Bay UNESCO Biosphere Reserve will start today! The scheme, which will last for 3 years, is a partnership project between Fingal County Council and the Old Irish Goat Society. A group of 25 Old Irish Goats, originating from the national herd in Mulranny, Co Mayo, are travelling with Melissa, their herder, and will arrive today in Howth as the first phase of the project gets underway. The project will utilise traditional methods of management, a goat herder and sheepdogs. It will also trial, for the first time in Ireland, the Norwegian “No-fence” system which employs GPS tracking. The goats will play an important role in managing growth to reduce fire risk to homes, while also enhancing the biodiversity of the priority heathland habitats. The Old Irish goat has the ability to control the accumulation of gorse, especially after fires and due to their skillful grazing behaviour and efficient digestive systems, adapt to feeding on harsher environments. They effectively offer a more economical and sustainable solution to managing the landscape.

Each day, Jeuken will lead the herd to different parts of the area where the goats will eat the gorse and heather, thereby reducing the fuel available for future wildfires.

Jeuken told Newstalk that the goats have voracious appetites.

“They are good grazers,” she said. “They have a large room and capacity so they can eat a lot of forage.

“Hopefully they will be able to eat their own weight in forage every day. For adults that is about 35kg to 40kg for the females and about 50kg for the males.”

The Dublin Fire Brigade fought the wildfires in Howth Head for six weeks over June and July. The Irish Air Corps assisted the firefighters by dumping water on more inaccessible areas.

“The height of the gorse comes down to make the fires less big,” he said.

“It is trying to I suppose cut up the landscape into smaller bits so that if a fire happens, it will only burn a small bit of the landscape instead of the whole mountainside.”

Howth Head was grazed by livestock and goats in particular until the 1940s. When the practice of traditional grazing declined, gorse and bracken expanded and wildfires became more frequent.

The herd of firefighting goats was transported to Howth Head from the national herd of Old Irish Goats of Mulraney in County Mayo.

The critically endangered species, which is indigenous to Ireland,  can only be found in remote mountain ranges roaming in feral herds. The Old Irish Goat Society is dedicated to breeding the species in an effort to keep this rare Irish native breed alive.