Houdini the goat, who evaded capture for over three weeks, is now being cared for at Furry Friends Animal Rescue & Sanctuary in Co Mayo. 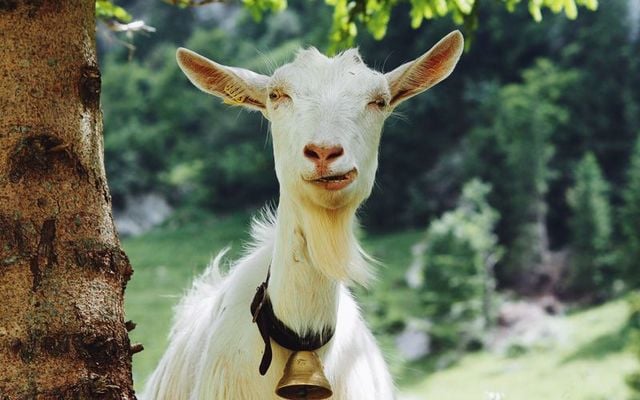 A goat has been roaming the streets of a Co Mayo town for nearly a month. (Stock Photo) Getty

A goat on the lam in Co Mayo - aptly nicknamed ‘Houdini’ by the locals - has been taken into care at Furry Friends Animal Rescue &  Sanctuary.

Houdini, a goat that had been spotted wandering Kiltimagh in Co Mayo for roughly three weeks, has been captured and is now being well looked after at an Irish animal rescue and sanctuary.

In a Facebook post on February 25, Furry Friends Animal Rescue & Sanctuary in Co Mayo said that Houdini "had been taken in by a very kind lady who did consider keeping her, but sadly didn't have the right set up."

Luckily for Houdini, she had a pal awaiting her arrival: "Houdini arrives at the weekend and that will make Buck a very happy buck! Finally, he gets his new wifey/partner in crime and Houdini doesn't have to scrape around for food anymore."

Absolutely crazy day! Houdini the goat has finally been contained! It is all thanks to a network of people showing...

In an update on February 27, the animal sanctuary said: "Houdini is here! It has been an exciting day for Buck. All that waiting and he finally found someone to play headbutt games with. He is over the moon to meet another goat though and is sticking close to her.

"She travelled back here without a peep and is eating well already."

Houdini is settling into rescue life very well. Buck is infatuated with her ?

The fugitive goat got her nickname after being jokingly compared to the famous early 20th-century illusionist for his ability to quickly disappear.

It is unknown where the goat came from and so far no one has come forward to claim the animal. The goat has been loose for three and a half weeks.

BreakingNews.ie previously reported that Houdini was spotted on a laneway close to SuperValu last week, but managed to escape before locals could seize it.

Following the sighting, volunteers from animal charity Mayo SPCA traveled to the town, but the animal could not be located once the volunteers arrived.

A spokesperson for Mayo SPCA confirmed the goat had been caught once before and put into a field, but it “got out.”

The slippery animal was last seen following walkers up the mountain outside the town.

The spokesperson added that arrangements have been made with Furry Friends in Charlestown to look after the goat once it is finally caught. The animal rescue and facility has a license to house farm animals.

“If people find the goat and are afraid they will be left with it that will not be the case. We have everything in place when it is caught.”

A worker at the Furry Friends Animal Rescue, Emma Semple, told the Irish Sun: "We've been after this goat for about three and a half weeks now. As soon as anybody gets there to catch her, she's disappeared again.

She added that the matter is “getting quite urgent” as the animal is “emaciated, very, very thin and could go into organ failure soon if it's not helped because it's so underweight."