British were furious about US visa for Gerry Adams, Ireland's State Papers reveal

British officials said there would be "hell to pay" if the US granted Gerry Adams a special visa to travel to New York City in 1994. 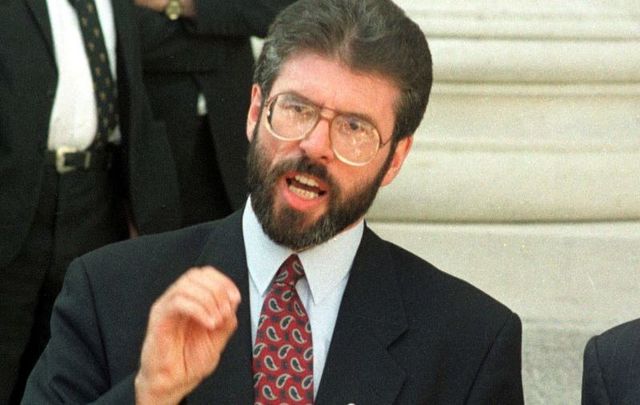 Ireland’s National Archives is this week releasing nearly 700 newly-declassified government files, with the majority relating to 1996 though some cover 1997 and later years.

Included in the tranche is communications about Gerry Adams receiving a limited visa to travel to New York City in 1994. Adams, the president of Sinn Féin who was banned from entering the US at the time, was invited by the National Committee on American Foreign Policy (NCAFP) to speak at a conference on Northern Ireland in New York City and would need a special visa waiver to attend.

The newly-released State Papers show that British officials in Washington told their Irish counterparts that there would be "hell to pay" if the Americans gave Adams a visa.

Nancy Soderberg, a senior official with the US National Security Council at the time, said that the British were "apoplectic" at the idea of Adams getting a visa. The British were opposing the visa “with vehemence and determination,” the State Papers show.

After consideration, Irish officials decided to remain neutral as to whether or not Adams should be granted the visa.

Ultimately, US President Bill Clinton personally intervened to see to it that Adams received the visa. RTÉ reports: “Despite ferocious British opposition, he [Clinton] decided that a strictly limited visa should be granted – limited in time, limited to a radius of 25 miles of New York, and limited by a prohibition on any fundraising, direct or indirect.”

Clinton said afterward: "I did believe that by giving Mr. Adams this visa, this limited visa to come here, we might have a constructive role in pushing the peace process, which is why I did it."

The Irish ambassador to London observed that the final decision was "deeply humiliating" for the British. Cabinet secretary Sir Robin Butler admitted that "what hurt the British most, in this case, was the failure of the American administration to accept the advice of the British government in the matter.”

Adams arrived in New York City on January 31, 1994, for the conference which was held at the Waldorf Astoria Hotel. Representatives from Northern Ireland's unionist parties declined their invitations, but Adams was joined by SDLP’s John Hume and the Alliance Party’s John Alderdice.

A week after the event, UK Prime Minister John Major wrote to Taoiseach Albert Reynolds saying in part that the US administration “must be regretting their decision to let him in” because Adams did not provide unequivocal support for the Downing Street Declaration, which was signed a month before his invitation, in his speeches during the visit.

Despite their initial feelings about the US visa for Adams, British officials acknowledged in June of that year that “the granting of the American visa was, with benefit of hindsight, on balance, beneficial.”

However, US Vice President Al Gore told John Hume after the 1994 event that he felt  "a sense of let down that Adams had not responded in a way which might have been more helpful to the administration during his visit."