US family proves you can make a successful move to Ireland

“I love that feeling, of being able to just stop on the street and have a chat, which makes me feel I’m really part of a community." 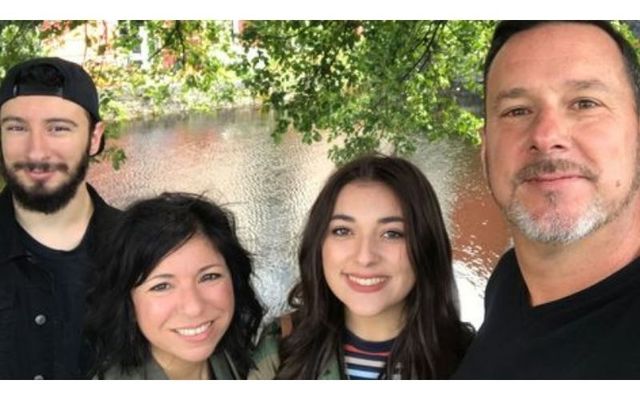 A trip home to visit friends and family in the U.S. only served to affirm the belief of Irish-American couple Tim and Kristina O’Toole that they made the right decision to move their young family to Ireland ten years ago.

Some people thought the O’Tooles were crazy when they announced they were moving to Ireland in 2011 from Connecticut.

At the time the Irish economy was in dire straits after the property crash three years earlier, and far more people were moving in the opposite direction. But the O'Toole's had no second thoughts.

Now they belong in Ireland. It took a lot of bureaucracy over six and a half years for the O’Tooles to become Irish citizens in May 2018 and, as they watched their children Elijah (22) and Madison (20) engage with their American cousins last month, they were thrilled to hear them talk about how much they love living in the Emerald Isle.

“We visited America a couple of weeks ago and it was interesting to hear them tell people that they feel more at home in Ireland now,” says Tim. “Even though we enjoyed seeing our friends and families again, we kept thinking that we couldn’t wait to get back to Galway and put on a fire. All four of us really feel that Ireland is home now.

“People seemed that bit tenser or polarised when we went back to America. People have gone to extremes and there doesn’t seem to be much room for compromise or agreement. Now that we live in Galway, Irish people do ask us about the current climate in the States, but we have learned to keep it vague. We don’t follow what’s going on in the States too much, because we’re trying to keep up with what’s happening here in Ireland.”

“People here in Ireland like to be a little more light-hearted and enjoy a joke, even when they are talking about politics,” laughs Kristina. “We have learned that sarcasm is the ‘love language’ of Ireland and to have thick skin. Everyone here enjoys winding you up and people don’t take life so seriously!”

The sense of community and the way in which people in Galway look out for each other is something Kristina treasures eight years after moving to Galway. She believes it has been of great benefit to her children, who see themselves as Irish now rather than Americans.

“My experience has been that, even though Galway is the third-largest city in Ireland, it still has a kind of village feel. If I walk into town, I know I’m going to bump into somebody who wants to stop and have a chat,” she says.

“I love that feeling, of being able to just stop on the street and have a chat, which makes me feel I’m really part of a community. I wouldn’t be able to get that feeling in America. I get that it’s obviously bigger, and different, but it’s something I really love about Ireland. Even though, of course, Ireland is not perfect. Sometimes the weather can really make you feel like staying at home and you have to force yourself to get out and meet people.”

Given that they wanted to set up a volunteer program with an organization called “Serve the City,” both Tim and Kristina felt the time was right to make the move of a lifetime from Connecticut to the wilds of the West of Ireland in 2011.

“Looking back, we came here at exactly the time when Irish people needed our help the most,” she says. “Perhaps they felt lonely because family members had emigrated. We enjoy making partnerships with environmental and voluntary groups, helping people in their own homes and reaching out. We identify the needs of each place we work in and we partner with other organizations.”

Strangely, both Tim and Kristina say they have been drawn to Ireland all their lives. For Tim, it feels as though he has come full circle. His ancestor, Edward O’Toole, was among a group of Irish “felons and convicts” deported by the British to the port of Annapolis in Maryland in 1742.

Seven generations on, he sees a lovely irony in the fact that he moved to Ireland of his own free will whereas his ancestor was forced to move to America in troubled times.

“He was deported,” he says. “I think in a sense it has come full circle. I know he was listed as a criminal by the British when he was deported. Maybe there’s a bit of redemption in the family name, now that I have been able to move to Ireland by choice!”

Growing up in North Carolina, Tim was always aware of his Irish heritage. Kristina, on the other hand, has no Irish blood and yet she was always infatuated by all things Irish during her childhood in Queens, New York, and Connecticut.

“Where I grew up in the North East, there were a lot of Italian and Irish immigrants. I just had this pull to want to live here, to somehow serve over here, to help out, and I wanted to learn everything about the culture. I was really interested in the food, the music, and the culture. My family didn’t understand my fascination with Ireland,” she says.

“A lot of my Irish neighbors in New York, who would have emigrated to Queens, really stepped in and taught me about their culture. They would have brought me to Gaelic football matches at the weekends or invited me to eat Shepherd’s pie, which is not something I would have grown up with. My family thought I was crazy!”

Tim and Kristina met University at Blacksburg, Virginia. They shared their passion for Ireland and Tim was blown away by his now wife’s firm belief that she would live in Ireland someday. He always felt that he would work outside the United States and her passion for all things Irish convinced him to make the move.

“My faith has always been important to me. I always felt that God would use me somewhere in the world, but not in America. I was always open to change. Kristina always had this big interest in and a pull towards Ireland, so we felt that maybe our faith brought us together,” he explains.

They went to Ireland on a couple of fact-finding missions with their children, who were aged just 14 and 12 in 2011. After touring Ireland by car, they felt fate was drawing them to Galway when they found their car was parked outside O’Toole’s SuperValu supermarket in Tuam on a wet and cold afternoon.

“We didn’t want to live in Dublin as we felt the city was too international and too big,” says Kristina. “So we just felt this pull towards Galway. We were looking for a sign to confirm that we should move here and then we pulled up right in front of a sign which read ‘Welcome to O’Toole’s.’ That was it for us!”

They were both delighted by how quickly their son and daughter settled in after they moved to Galway City. Elijah got involved with the Salthill Devon soccer club and Madison joined a stage school. Within weeks they were loving life in Galway, as their parents set up the Galway branch of Serve the City and began to help out with a variety of volunteer projects.

“Elijah and Madison seemed to be able to make friends so quickly,” says Kristina. “Both of them found people their age so friendly and so welcoming here. It didn’t take them long to decide that this was home. They never experienced any kind of bullying or anything. They both have big circles of friends and are both now working in Galway.”

Tim and Kristina, former ministers at the Foursquare Church in Connecticut, are now very well-known figures in Galway’s volunteer community. They also run a weekly prayer meeting in their Salthill home.

They help elderly people in their homes, paint over graffiti, play huge roles in Ireland’s annual tidy town competition, and are two of the key figures in the city’s annual Darkness Into Light walk for suicide prevention charity Pieta House.

“We like to work together with other volunteer groups and to identify areas of need,” says Tim. “It didn’t take long after living here to hear about the problem of suicide in Galway. We provide volunteers for Darkness Into Light and the walk is a great way for us to connect with other groups and like-minded individuals in the city.”

In May of last year, all four members of the O’Toole family became Irish citizens at an emotional ceremony in Killarney, Co Kerry.

“For me, it meant that we could now put down roots here,” says Kristina. “We didn’t have to be concerned or worried when we went for our visa renewal each year. We felt that we could really live our lives here in Ireland and the history of our family would now be intertwined with the history of this beautiful, welcoming country.”