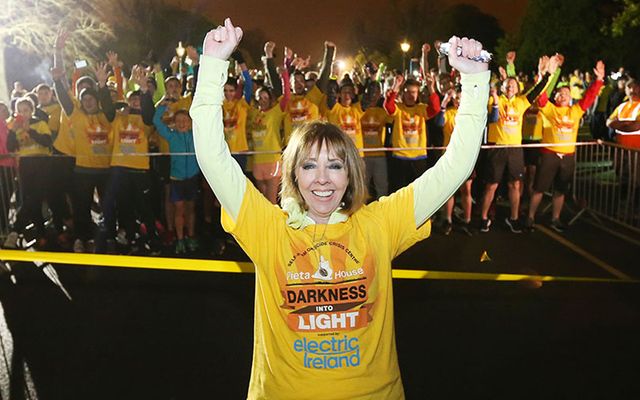 Senator Joan Freeman at a previous Darkness into Light event.

The Pieta House-organised events took place at dawn with the aim of assisting the charity as it tackles the stigma surrounding suicide. The symbolic timing of the event, as night breaks into morning, emphasizes hope for people with these tendencies while a number of participants held candles and lights during the walk.

The fundraiser took place at two different locations in the city, with Flushing Meadows in Queens hosting one of the walks while Gaelic Park in the Bronx hosted the other. The money raised by the events goes towards Pieta House’s counseling services for those with mental health issues seeking assistance and others directly bereaved by suicide.

The Darkness Into Light walk has grown dramatically around the world since 2009 and is Pieta House’s main awareness event each year.  The non-profit, which has an office at the New York Irish Center in Long Island City, decided to grow its campaign in an attempt to fight against suicide by expanding its Darkness Into Light walk to nine cities across the U.S. this year, including Boston, Chicago and San Francisco. Overall this year, events took place in over 150 locations across the globe including London, Sydney and Abu Dhabi.

The phenomenal Darkness into Light run, with Pieta House, Preventing Suicide and Self Harm, doesn't just happen in Ireland but across the US, too. Find a run in your area on May 6: https://pietahouse.eventgrid.com/ #DIL2017

Posted by IrishCentral.com on Saturday, April 29, 2017

Despite the early start and chilly weather, those taking part in New York were in a jovial mood as they set out to create a sense of belonging and hope to those who need it most.

“I think it is an effective way of raising awareness of this problem that affects so many people,” said Sara Arnold who was taking part in the 5k event in Queens.

She said it was important to attend the walk to show people with mental health problems that they can seek assistance and they have support.

“My family has been affected by suicide and I always think that maybe there is more we could do to help. Unfortunately, it was too late for us but it’s not for many others and that’s why we are here this morning, to help those who may feel that they may be in a period of their life where they only see hopelessness,” she added.

Barry Langan was another local man at Flushing Meadows who attended, and he believes the symbolism of the event is important.

“As you can see by the turnout here, there are so many people who care about this problem in our society. I do think there’s a stigma around the issue but we are trying our best to eradicate it,” he said.

“This organization has done a great job and it has grown to a point where we have so many people showing their support here. I think we are doing a good job is creating awareness and as the evidence shows we are having success with the Darkness Into Light walks.”

Thousands attend similar gatherings in towns and cities across Ireland where the rate of suicide among teens is the fourth highest in the European Union.

“This is a really great cause. I came here this morning because I feel it’s important to continue growing the awareness around suicide,” said James Armstrong, another New Yorker who walked in solidarity with those suffering with mental health issues.

“Suicide is a horrible thing but we’re doing a lot to help by coming here. I think with support from as many people as possible, those who are suffering can gain a sense of hope through events such as these. I think it can grow to be an even bigger demonstration, for sure.”