Army of Irish Darkness into Light advocates illuminate the USA

Annual Pieta run / walk brings pride to its Founder as Irish in American spread the message to “wake up” and fight against suicide. 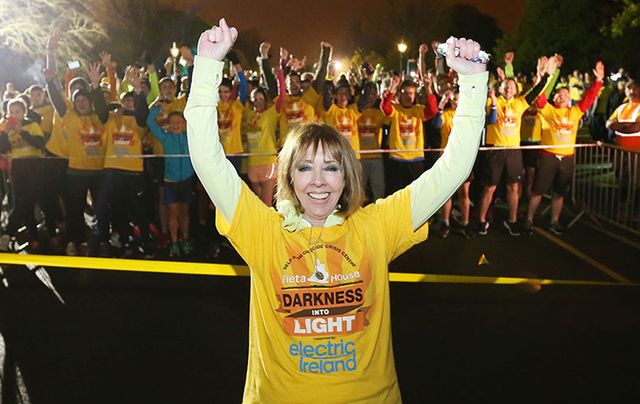 Founder of Darkness into Light Senator Joan Freeman at a 2016 event. RollingNews

I have just returned from America, visiting eight states in nine days. No mean feat for the hardiest of us, but back home in Ireland I almost skipped off the plane, energized, buoyant and full of resolve – because I met the most incredible men and women who had moved to the States, and brought with them a piece of Ireland. The Irish trademark was written on each of their faces.

Those I met were not only carrying the flag for our nation, but carrying the flag for Darkness into Light - a 5k walk that begins at 4am in the morning while it is still dark and as the sleep-deprived participants cross the finish line, they are greeted by the glorious dawn. This is a symbolic image that reflects the work in Pieta House New York – a service that helps people who in their darkest hour, facing enormous distress with thoughts of suicide, cross the line to hope.

I started Darkness into Light nine years ago with a small group of volunteers, not knowing how the event would turn out. Four hundred souls turned up on a cold May morning in the Phoenix Park in Dublin, all eager to participate in what would become the greatest annual event in Ireland.

At the beginning, it was heartbreaking watching the people take part. I remember seeing an older lady walking alone, rosary beads clasped in her hands, obviously praying for someone she had lost to suicide. Beside her were two young men each with a can of Red Bull in their hands, stopping occasionally to take a small sip and continue on their journey. They wore the bright yellow t-shirts that have now become iconic with the walk. A simple message on the back of their t-shirt stated, "Doing it for Damo." Further along the crowd a young woman clutched the hand of her little boy. He, too, was wearing yellow. It was a t-shirt for an adult, reaching down past his knees, and on the back it simply said "I'm walking for my Dad."

The phenomenal Darkness into Light run, with Pieta House, Preventing Suicide and Self Harm, doesn't just happen in Ireland but across the US, too. Find a run in your area on May 6: https://pietahouse.eventgrid.com/ #DIL2017

Posted by IrishCentral.com on Saturday, April 29, 2017

The Pieta sculpture and our service in New York provides solace, light, and warmth to those on a journey of despair. The Darkness into Light walk brings not only comfort to those who have lost someone to suicide but a solidarity of its participants – a shared grief, but also a shared hope.

The theme chosen by the Irish team for this year’s Darkness into Light was "Wake Up". I believe the message that they're trying to convey is calling on our country to "wake up" to the horrors of suicide. But my own interpretation of this theme is wholly different.

I believe this call for action to "wake up" is to wake up to the fact that we have an island, united. That people from all the little villages and towns throughout the country will come together to unite in the fight against suicide. They come together, many in the midst of their own grief, to prevent the scourge of suicide happening to one more family. They come together united, as only we Irish can.

The Irish in America are doing exactly the same, except under difficult circumstances. They are bringing the concept of compassion to a country that is in fear of suicide. They are pioneering the idea of hope into an area where there is only darkness. These men and women are courageous!! In eight states across America they have begun to infiltrate this vast continent with the notion that you really can come out of the dark and into the light. They are giving the people of America the finest gift of all – the gift of life. They believe that this wonderful gift of life is for every nation, for every culture and for everyone that has suffered.

* This awe-inspiring morning takes place next weekend, May 6th, so register now