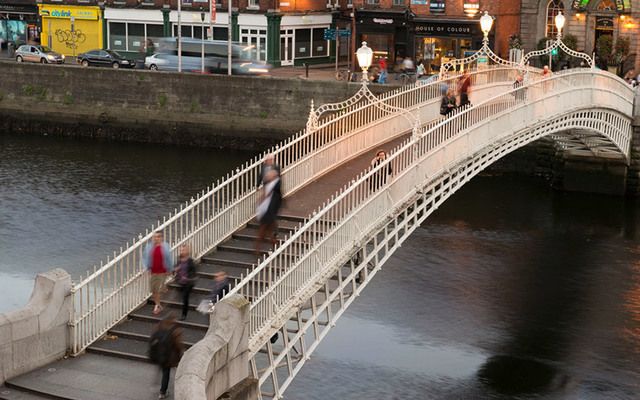 There’s a wonderful word in “The Random House College Dictionary” that describes what much of Michael Collins’ Dublin looks like today, nearly 100 years after his death: Extant—“in existence; not destroyed or lost.”

Well, the George Washington of Ireland, Michael Collins, has left a kind of hands-on legacy to the Irish—it is his revolutionary Dublin and many of the buildings of that time are still standing. In fact, most of them are still standing without plaques noting their importance to the birth of the Irish nation.

As someone who has written two books about Collins and has read just about everything ever written about him—not to mention witness statements and other related materials—I know how difficult it is to track down Collins’ Dublin. But one man has done it and put it all in one volume. The man is Joseph E. A. Connell, Jr. and the book is “Michael Collins: Dublin 1916-22” (WordWell).

Read more: How Michael Collins was protected and betrayed by two Dublin porters

Joe Connell shares one of Collins’ traits—he’s rather secretive. He was reluctant to talk about himself, only saying, “I am a lawyer and have practiced in California for about 40 years.” IrishCentral had to dig into the Internet to see what they could uncover about him. At Kilmainhamtales.ie, where he is a contributor, IC found of picture of him wearing an eyepatch. In an Irish Times piece, we learned that he played wide receiver for the San Francisco 49ers until a knee blew out. He was also a member of the 82nd Airborne and graduated from the Pepperdine University Law School. Oh, by the way, did I mention that he also altruistically donated a kidney? To put it mildly, he is not your ordinary Michael Collins scholar.

How did his interest in Collins come about? “As I continued to research the revolutionary period between 1913-1923, and particularly after 1916, I found that Collins was everywhere. He was not ‘the man who won the war’ as Arthur Griffith called him, but I believe he was the one person without whom the War of Independence would not have gone as it did. I’ve read every book on Collins I could find, as well as all the Witness Statements, Mulcahy, de Valera papers, Cosgrave papers, etc., many other sets of papers, hundreds of Pension Applications, but the real thing was just walking the streets and trying to find out ‘where it all happened.’ ”

#10 Exchequer Street: Collins first office in 1917 (brown door to the left of the Dunne's Store).

His work started innocently enough in 1999. “I started out with a loose-leaf notebook and just added addresses by hand. Then I put everything on USB sticks, and have continued to add. I’m still adding!”

Connell has written several books about revolutionary Dublin including the seminal “Dublin in Rebellion”—one of the most invaluable resources to the time—which pinpoints the important addresses in Dublin during the War of Independence. When asked the difference between the two books Connell simply says, “‘Michael Collins: Dublin 1916-22’ is ‘Dublin in Rebellion’ on steroids!”

As anyone who ever researched Dublin history—be it Collins, Joyce or the family tree—will find that there is no better source of Dublin’s yesteryear than the Thom’s Directories, which state every street address in Dublin and what businesses were there. The Pearse Street Library, two blocks from Westland Row, has a superb collection and Connell is a huge fan.

“The Thom’s are very important,” he said. “I’ve thought about getting my own copy of Thom’s for those years, but mostly I’ve just spent hours after hours at the National Archives on Bishop street and at the Pearse Street Library. Thom’s Directories are invaluable.”

His other sources of information include the National Archives, the National Library, Dublin City Library, the Irish Times, all newspapers, i.e., the Freeman’s Journal and London Times on microfilm, UCD and TCD Libraries. “In researching my books,” Connell says, “I just went to every source I could think of and started—then one source led to another.”

Another invaluable resource, says Connell, are the witness statements which can be found online at the Bureau of Military History at http://www.bureauofmilitaryhistory.ie/. “They are absolutely imperative for anyone researching the period,” claims Connell. “They were supposed to ‘stop’ at 1921 because of the emotions of the Civil War were still so strong, but some (Paddy Daly, for example) went beyond 1921 in their statements. Some are very short, some are very self-serving, some are almost book length (Joseph Lawless’ is about 180 pages), but one cannot do research on the period without consulting them. There are 1770 of them—and I think I’ve read them all.”

To make things easier for his readers, Connell has broken the addresses into postal districts. “It seemed,” says Connell, “the easiest way to get across the idea that one could know what happened in the area where one worked or lived. So many people I talked with over the years never realized they passed that building on the way to work every day, or that ‘Granny really did live right across from one of the Bloody Sunday houses.’ Many people have now told me they never knew how important the building where they work was to Collins and Irish history. I’m glad I made the choice to separate it by postal codes.”

The one thing that almost guarantees you access to buildings with a connection to Collins is the magic words—“Michael Collins.” I’ve been able to gain access to several buildings around Dublin just by asking if I could take a look, most prominently 38 Upper Mount Street where Vinny Byrne shot two British spies on Bloody Sunday. Connell has had similar experiences, but not all of them positive.

“I once talked to a TV producer,” he recalls, “whose offices were on Lower Baggot Street—one of the buildings on Bloody Sunday.  The offices were completely remodeled and no-one would know of their history, or recognize them as a former rooming house.

“On the other hand, a friend of mine, the late Glasnevin Cemetery historian Shane MacThomais (RIP) was once walking around Dublin with one of my books and went up to a house on Upper Pembroke Street where the owner was tending her garden out front—Shane asked her if she was aware that her house was one of the houses on Bloody Sunday and she replied: ‘That feckin’ book.  I wish you people would stop coming by here!’”

Connell attributes the success of his book to his Dublin publisher, WordWell. “I was very lucky to work with WordWell,” he told IrishCentral.  “I’ve been writing the column in History Ireland for several years, and I have had a regular spot on 'Talking History' for Newstalk since 2009, but many publishers were very skeptical of this kind of book.  I think the format is so different that it was difficult for me to get across the idea that one could open the books almost anywhere and just start reading—my books are not the kind that a reader would read from cover to cover.  I’m very grateful to Nick Maxwell at WordWell for seeing how it is used, and we’ve both been very pleased, as all the books have sold very well.”

Connell, now based in Florida, will be traveling to Dublin in early November to attend the Dublin Book Fair. It’s a safe bet that he just may find another Collins address or two on his backstreet rambles.

* Dermot McEvoy is the author of the "The 13th Apostle: A Novel of Michael Collins and the Irish Uprising" and "Our Lady of Greenwich Village", both now available in paperback, Kindle and Audio from Skyhorse Publishing. He may be reached at dermotmcevoy50@gmail.com. Follow him at www.dermotmcevoy.com. Follow The 13th Apostle on Facebook at www.facebook.com/13thApostleMcEvoy.