Some say he changed the course of the critical battle of Saratoga when he gunned down two British generals, at 300 yards. 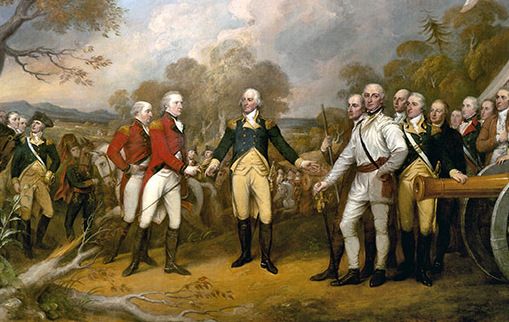 The surrender of General Burgoyne to George Washington in Saratoga.

Timothy Murphy was a rifleman and expert sniper in the American Revolutionary War. Some say he changed the course of the critical Battle of Saratoga when he gunned down two British generals, at 300 yards.

At the Battle of Bemis Heights, the second Battle of Saratoga, on October 7, 1777, Murphy is reputed to have shot and killed Sir Francis Clerke and General Simon Fraser.

Relatively few details of Murphy's early life are known. He was born in 1751 near the Delaware Water Gap. His parents were Presbyterians from County Donegal in Ireland who moved to Shamokin Flats (now Sunbury, PA) in 1759, when Murphy was eight years old, according to Wikipedia. A few years later, Murphy became an apprentice to a Mr. van Campen and moved with the van Campen family to the Wyoming Valley, which was then the frontier.

On June 29, 1775, shortly after the start of the American Revolutionary War, Timothy Murphy and his brother John enlisted in the Northumberland County Riflemen, specifically Captain John Lowdon's Company. Their unit saw action in the Siege of Boston, the Battle of Long Island, and "skirmishing in Westchester."

After this, Murphy was promoted to the rank of sergeant in the Continental Army's 12th Pennsylvania Regiment and fought at the battles of Trenton and Princeton. Murphy was an "expert marksman," defined as being "able to hit a seven-inch target at 250 yards." In July 1777, this skill led to Murphy joining Daniel Morgan's newly formed Morgan's Riflemen.

Later that year, he was selected as one of 500 hand-picked riflemen to go with General Daniel Morgan to Upstate New York to help stop General John Burgoyne and the British Army. As the battles around Saratoga raged, the British, having been pushed back, were being rallied by Brigadier General Simon Fraser.

Benedict Arnold rode up to General Morgan, pointed at Fraser and told Morgan the man was worth a regiment. Morgan called on Murphy and said: "That gallant officer is General Fraser. I admire him, but it is necessary that he should die, do your duty."

Murphy scaled a nearby tree, took careful aim at the extreme distance of 300 yards, and fired four times. The first shot was a close miss, the second grazed the General's horse, and with the third, Fraser tumbled from his horse, shot through the stomach. General Fraser died that night. British Senior officer Sir Francis Clerke, General Burgoyne's chief aide-de-camp, galloped onto the field with a message. Murphy's fourth shot killed him instantly.

Several years after the 1807 death of his first wife, Murphy married Mary Robertson, and with her relocated to Charlotteville, NY. There he and his new wife had four more sons. Murphy is considered a hero in Schoharie County, NY where he resided. In the cemetery in Middleburgh, an annual walk is named in his honor.