Celebrating Ireland's National Heritage Week with some of the most popular historical sites in the country. 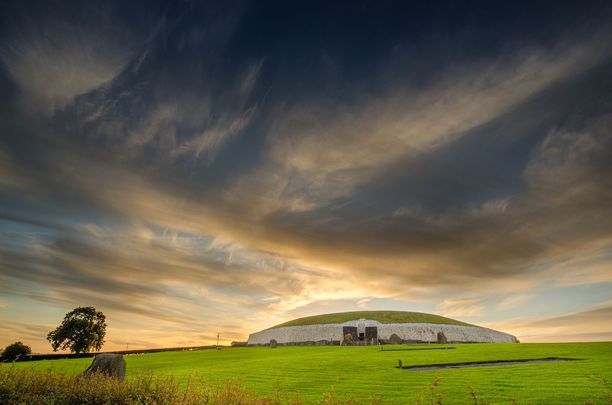 Here are IrishCentral's choices for the top ten historical sites in Ireland. 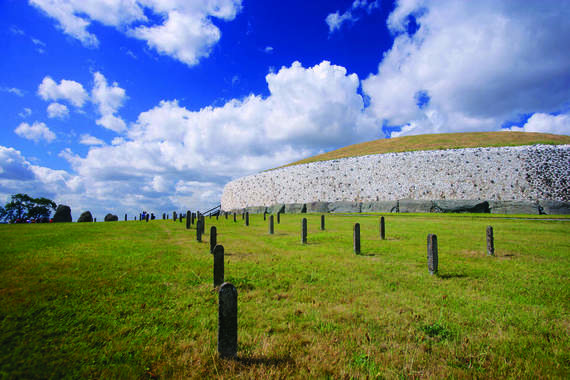 At Newgrange, County Meath, the wall of the passage tomb decorated with a Celtic spiral.

Dating back to 3200 B.C the passage tomb at Newgrange is older than the pyramids in Egypt and is officially a UNESCO World Heritage site.

Newgrange is a large passage mound, spread over an acre and surrounded by 97 uniquely carved kerbstones. The cremated remains of the dead were buried in large stone basins under the mound in a chamber accessible by a narrow passage.

At dawn on December 21, the shortest day of the year, sunlight shines directly into the central chamber of the tomb. It is believed that this was an ancient way of measuring the passage of time, like a calendar for the ancient farmers, or that the light has some religious significance for those in the afterlife.

Newgrange is part of the Brú na Boinne complex, which includes similar tombs at Knowth and Dowth. 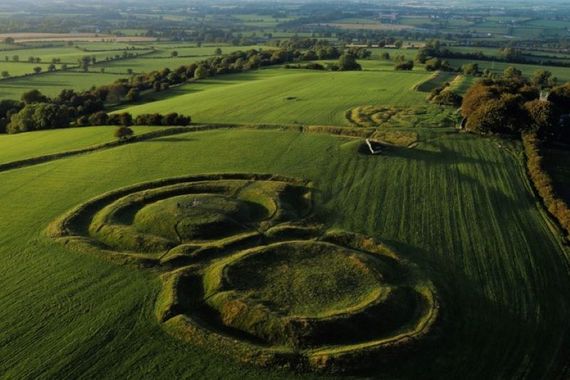 The Hill of Tara is also located near the River Boyne in Meath. It is an archaeological complex that runs between Navan and Dunshaughlin and contains a number of ancient monuments. According to tradition, it was the seat of the High King of Ireland (Árd Rí na hÉireann).

The hill itself is 500 feet high and has some of the most panoramic views of the plains of Meath. 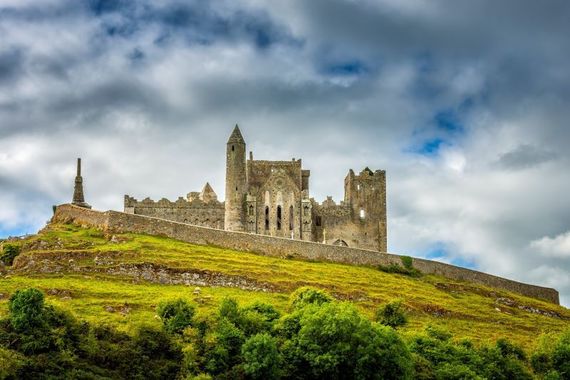 The Rock of Cashel is not a rock at all - a common misconception among tourists reading the name from the map.

This Rock of Cashel was a fortress in the 4th century. The medieval structure has four edifices, including the Connac’s Chapel, the round tower, the cathedral, and the Hall of the Vicars Choral.

It was the traditional seat of the Kings of Munster for several hundred years before the Norman invasion. Very little of the original structure survives. Most of what remains dates from the 12th and 13th centuries. 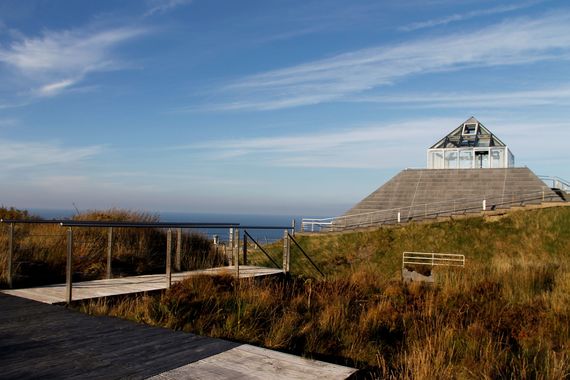 The Ceide Fields are a Neolithic landscape dating back to 5000 B.C. They are the oldest known field systems in the world. Their name, "Ceide Fields," literally means "fields of the flat-topped hill."

The rocks delineating the field system were originally discovered by a school teacher cutting turf in the bog in the 1930s. It took over 40 years to unravel the true significance of the fields. Fields, houses, and tombs had been concealed under the bog for thousands of years. 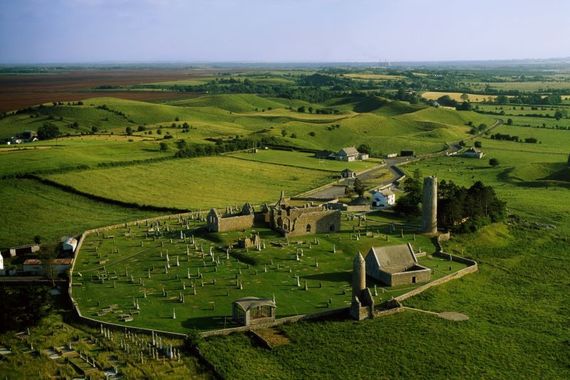 Clonmacnoise is one of Ireland's most important monasteries and is located on the banks of the River Shannon. It was founded in 545 by Ciaran of Clonmacnoise. Until the 9th century, it had very strong ties with the Kings of Connacht.

Its strategic location also helped it to become a center of religion, learning, craftsmanship, and trade. Together with Clonard, it is one of the most famous monastic sites in Ireland and continues to be visited by scholars from all over Europe.

Jerpoint Abbey is a well-known Cistercian abbey, founded in the 12th century. Its most famous asset is its sculptured cloister arcade with unique carvings.

It was constructed in 1180 by Donogh O'Donoghoe, the King of Osraige, and is dedicated to the Blessed Virgin. The monastery thrived until the Dissolution of the Monasteries by Henry VIII. 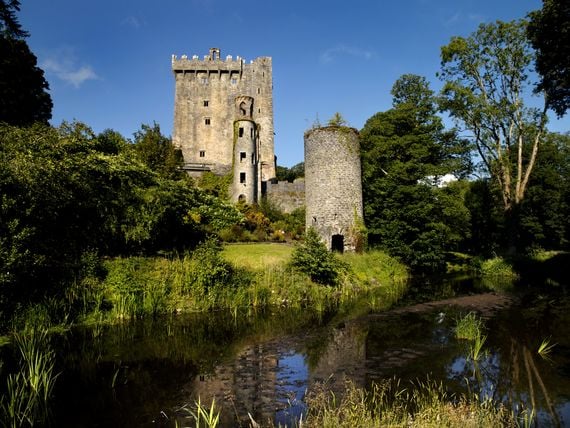 Six miles northwest of County Cork, Blarney Castle and the Blarney stone date back to 1446. The castle was a medieval stronghold on the River Martin. Although earlier fortifications were built on the same spot, what is left standing today dates back to the MacCarthy dynasty, King of Desmond.

The castle and the stone are among the most popular tourist attractions in Ireland. Legend has it that if you kiss the Blarney stone you will have the "'gift of the gab," meaning "clever, flattering or coaxing talk." 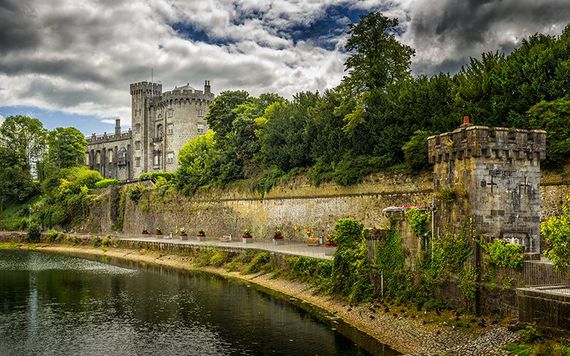 Kilkenny Castle is certainly one of Ireland's most impressive fortresses. The castle dates back to 1191 and stands with three tall towers.

The original castle was built by William Marshal, the 1st Earl of Pembroke, to control the crossing point on the River Nore. Some of the stone has been replaced.

Not only is Leap Castle an extremely historically important castle but it is also said to be one of the most haunted locations in Ireland. This castle has been the scene of some truly appalling acts.

It was built in the 15th century by the O'Bannon family and was originally called "Leap of the O'Bannons." In 1513 the Earl of Kildare Gerald FitzGerald attempted to seize the castle and three years later attacked again. In 1557 the O'Carrolls had possession.

Within the O'Carroll family, there was great rivalry which culminated in murders and killings in the chapel. This is just a brief chapter of the castle's sordid history. Later. when the castle was being studied, a dungeon where people had been left to die was discovered. 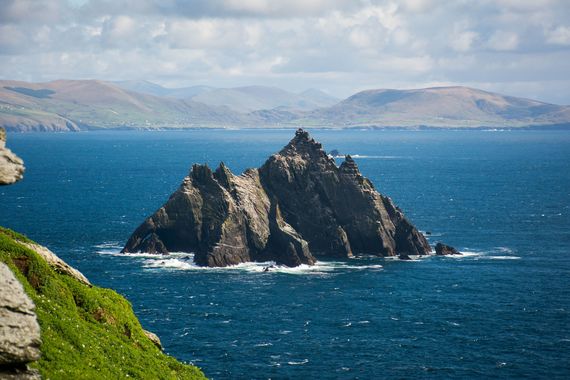 Skelling Michael (which literally means Michael's rock) is a steep and rocky island in the Atlantic Ocean off the coast of Kerry. It was founded in the 7th century and for 600 years it was the center of monastic life for Irish Christian monks.

In 1996 it was listed as a UNESCO World Heritage Site. Reached only by boat, Skellig Michael is one of Europe's most famous but least accessible monasteries. As a site, it is very well preserved, and the Spartan conditions inside the monastery illustrate the ascetic lives of those who built it and were devout there. The monks lived in "beehive" huts perched over the dangerous cliffs.