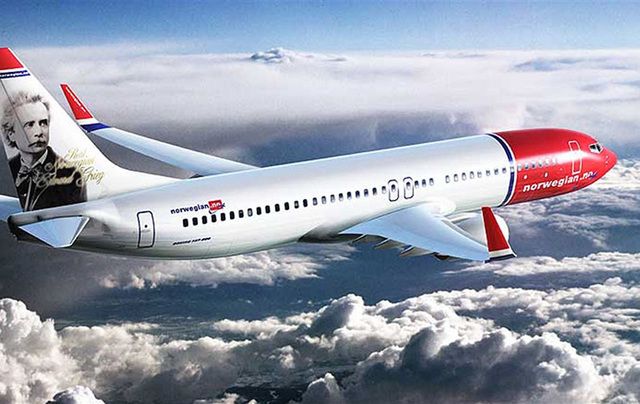 Low-cost airline Norwegian today announced a series of 24 groundbreaking new transatlantic flights from four destinations in Ireland, offering passengers low-cost travel to the USA from just $150 round trip introductory fare. The services will start July 1. They can be booked through Norwegian.com/uk for Belfast or Norwegian.com/ie for Cork, Dublin, and Shannon.

All flights will be on the new Boeing 737 MAX aircraft, one the newest planes and most highly developed technologically in the skies. Dublin, Shannon, Cork, and Belfast will all have new flights for about $150 round trip.

The flights from Cork to the Boston area will make history, marking the first time Cork Airport has had transatlantic service.

It will also add a second direct service for the summer with two flights a week from Belfast to Green Airport in Providence, which is just 90 minutes from Boston.

Dublin Airport will also have a daily departure to New York's Stewart Airport.

€140 return for Cork to Providence, US direct (incl all taxes) is very impressive. Norwegian transatlantic flights are now available to book pic.twitter.com/WI5XFYFbZC

The low lead-in rates are "some of the cheapest transatlantic fares ever seen," according to a statement from Cork Airport.

The airline says, “The flights will serve two destinations on the US east coast, with a focus on smaller US airports – these airports offer good access into the New York, Boston and New England areas but carry significantly lower landing charges, allowing Norwegian to offer some truly affordable fares that will allow as many people as possible to fly.

Dublin – 12 transatlantic flights per week from €69:

Norwegian CEO Bjorn Kjos said: “We are pleased to announce our new highly-anticipated transatlantic routes. Our new, non-stop service will enable tens of thousands of new travelers to fly between the continents much more affordably. Norwegian’s latest transatlantic offering is not only great news for the traveling public, but also for the local U.S., Irish economies as we will bring more tourists that will increase spending, supporting thousands of local jobs.

“We are excited to finally be able to launch services to the US from Ireland, Northern Ireland and we would like to express a big gratitude for the extensive support from consumer groups, government officials, airports, and the travel and tourism industry on both sides of the Atlantic in our quest to offer affordable transatlantic flights for all.”

Speaking at the press conference on Thursday morning, in Cork, Niall MacCarthy, Managing Director at Cork Airport said “Today’s announcement is not just about a new route, it also heralds low-cost transatlantic access. Norwegian will do for low-cost transatlantic services what Ryanair and others have done for low-cost European services. On that basis, we are really thrilled with today’s news. Cork Airport, already the Republic of Ireland’s second busiest airport, is now also Ireland’s newest transatlantic airport.”

He continued, “Today’s breakthrough presents great opportunities to further grow tourism in the South of Ireland in future years. Passenger growth in 2017, which is already underway, will come on top of the 8% passenger growth we delivered in Cork Airport last year. We look forward to welcoming US visitors directly onto our tarmac for the first time this July with knock on benefits to regional tourism. Equally, we look forward to providing our friendly and convenient customer service in a modern terminal setting to Irish passengers travelling to the United States.”

Welcoming the announcement, Matthew Thomas, CEO of Shannon Group, which owns and operates Shannon Airport, said “This is a very significant announcement for Shannon, for the wider region we serve and for transatlantic aviation generally.  It not only brings another new carrier to Shannon, giving us our largest number of US services in over 17 years, but it’s introduces a new model of low cost flying for transatlantic aviation.”

Tourism Ireland welcomed Norwegian Air’s announcement of new transatlantic services to the island of Ireland for 2017 – including new flights to Cork (from TF Green Airport in Providence) and to Shannon, Belfast and Dublin from New York (Stewart International Airport) and Providence (Rhode Island). These flights will commence in early July and will certainly help boost tourism from the all-important US market, offering more choice to prospective American visitors living in the North East.

Today’s announcement means the total number of transatlantic airline seats this summer will be 60,000, from 20 North American gateways to the island of Ireland – that’s 10,000 additional seats (+20%) compared to summer 2016.

Niall Gibbons, CEO of Tourism Ireland, said: “Today’s announcement is excellent news for tourism to the island of Ireland for 2017. We look forward to working closely with Norwegian to maximize the promotion of these new routes from New York and Providence. As an island, the importance of convenient, direct, non-stop flights cannot be overstated – they are absolutely critical to achieving growth in inbound tourism. Tourism Ireland is committed to working with Norwegian, as well as with Dublin, Belfast, Shannon and Cork Airports, through co-operative marketing, to drive demand for these new flights.”