Walking the Dingle Way reveals the magic of Ireland’s beauty on an Irish summer's day. 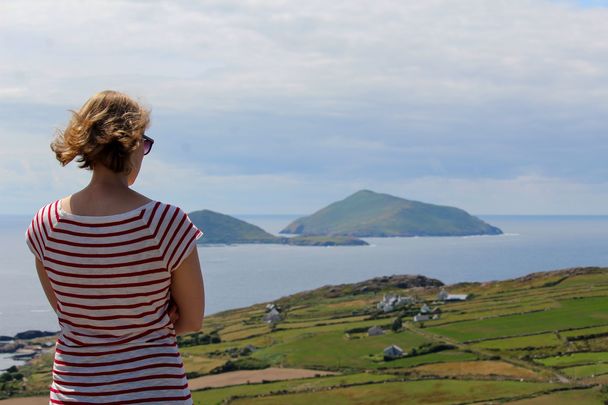 Walking the coast of County Kerry: Following in the steps of St. Brendan and celebrating Irish summer days with Camino Ways. Getty

Walking from Tralee to Dingle along the Kerry Camino is possibly one of the most beautiful ways you can spend your time touring Ireland.

One of the joys of an Irish summer is the 17 hours of light every day and how easy it is to get around this relatively small island. One taxi and two trains later I went from an office worker in Dublin city to following the Kerry Camino in the footsteps of Saint Brendan the Navigator.

Over two days we took on the challenge of walking from Tralee to Dingle (39 km / 22.4 miles) taking in some of the most wonderful countryside and sights.

The Kerry Camino route, from Tralee to Dingle, is believed to have been taken by pilgrims and monks on their way to St. James Church, in Dingle, and onward further afield to Santiago, Spain. 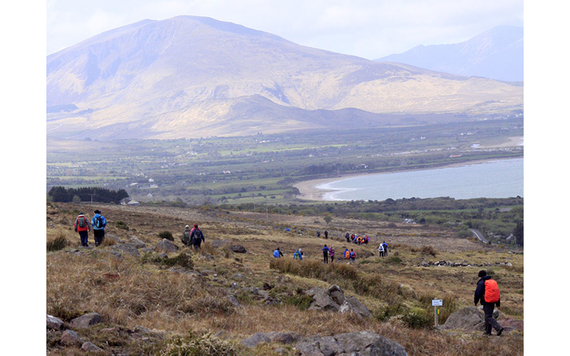 It’s also the route followed by St. Brendan, one of Ireland’s most famous saints, in 512AD. According to the text “The Voyage of St. Brendan”, it was this traveling preacher who first reached the shores of America.

Not only is this area steeped in history it’s also one of “the most beautiful places on earth,” officially, according to National Geographic. For a personal added bonus the sun shone upon us for our whole trip. Absolutely magic.

Our first port of call was Tralee, the county town of Kerry, and a lively spot with bars, cafes, shops, and restaurants lining the streets. We stayed at the Grand Hotel and enjoyed a really delicious meal in the bar (mussels served with brown bread and plaice served with a seafood bisque).

What’s great about walking 39 kilometers (22.4 miles) in two days is that you have free rein to eat whatever you desire and sleep like the dead. What could be better?

The next morning we were driven to the small village of Camp to start our walk. We were instructed by our driver to stick to our walking notes and keep our eyes peeled for the clear signs along the trail. Of course, we managed to get lost almost immediately, but after getting ourselves back on track the walk went without a hitch.

The walk from Camp to Annascaul is 17 km (10.2 miles) and takes you through the wonderfully lush and empty valleys below the Caherconree Mountain.

What was breathtaking was that during our four-hour walk (we were very pleased with that time, by the way) we saw only two other people. We were surrounded by the rolling hills, exposed rocks, with quick glimpses of the sea in the distance, and thankfully the blissful sun.

We had lunch at Inch Beach, the longest beach in Ireland and a favorite among water sports fanatics. Even though the winds are almost too strong to stand on the beach there were kite surfers and brave swimmers heading out into the break.

Far more sensibly we took refuge in Sammy’s Cafe for coffee and cake.

We arrived in Annascaul, the birthplace, and home of the much-admired Antarctic survivor and hero Tom Crean. Our first stop, almost the centerpiece of the town, was the South Pole Inn, the bar that Crean opened after he retired from the British Navy in 1920. 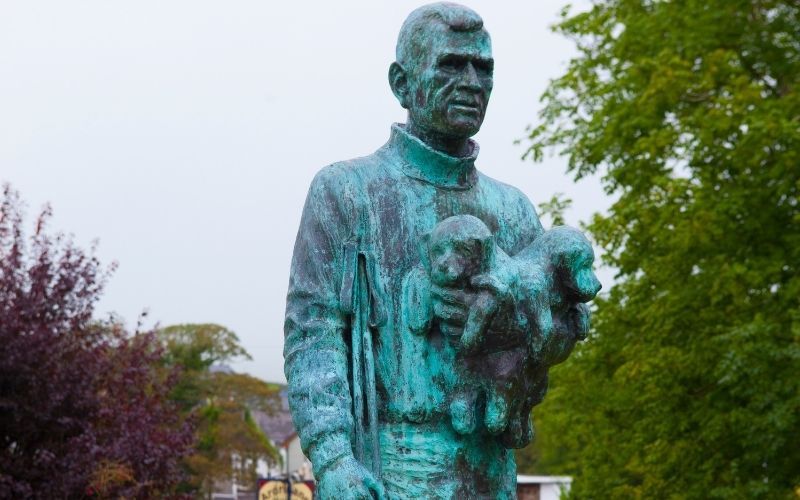 The walls of the pub are filled with the most amazing photos of hardy Polar heroes that really put your last 17-kilometer walk into perspective. The heroes’ bar is a lively spot with great food (we tried the fish and chips and braised lamb and mash), their own lager named after the man himself, and live music.

That evening we also ventured to Hannafin’s bar to sip wine, play board games and listen to the chat around the bar. The bar run by John (a retired teacher, turned farmer, and bar owner) played Bowie and the atmosphere was perfect for folks bewildered by too much fresh air and walking.

By the end of our one-day stay in Annascaul we were already calling Noel and Moira, our hosts who run the Annascaul Bed & Breakfast, our Fear and Bean an Tí (Man and Woman of the House). They made us feel instantly at home and most importantly provided a hearty Irish breakfast the next day.

Feeling like pros after one day of walking we set out from Annascaul and headed towards Dingle, a 22 kilometer (14 miles) walk.

Our first stop was definitely the most memorable stop of our trip. The natural storm beach next to Minard Castle is such a beautiful spot it borders on being surreal. Sitting on the black boulders of the storm beach next to the remains of a 16th-century castle we looked out at the Dingle Bay and the Iveragh Peninsula stretching into the distance. 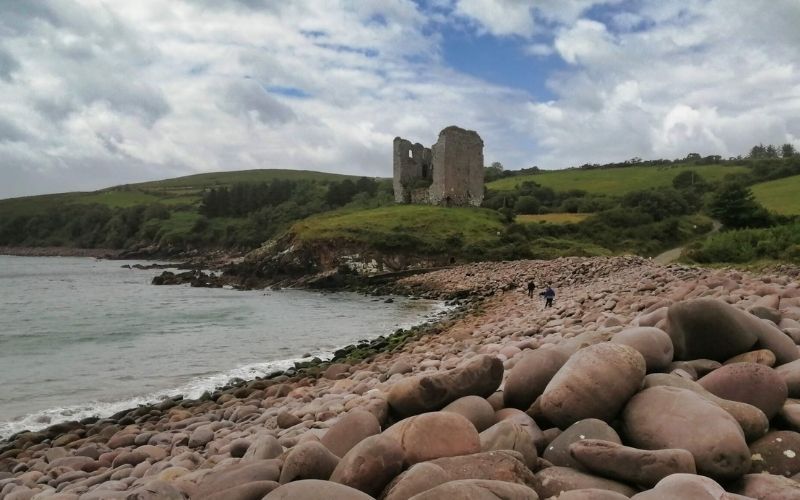 Did I mention it was still sunny? Truly, there’s nowhere in the world better than being in Ireland in the sun.

Onward we headed to the Conor Pass and this is where the walk got a little more difficult. However, the payoff was the amazing views. The route took us up through farmland, over streams, and on through gorgeous sparsely inhabited roads dotted with beautiful houses.

The road into Dingle did seem to go on for an eternity and when the village eventually appeared it was like an oasis. Dingle is just like a postcard. Having seen so many photos of the beautifully colored houses and shopfronts and the harbor and the fishing boats going out to sea, the town felt almost familiar. 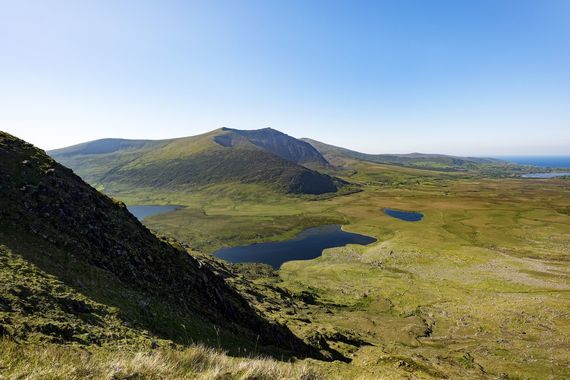 After checking in at the Lantern B & B we headed to the wonderful Dick Macks, a beautiful, family-owned traditional pub built around the remnants of the old family shoe shop.

For dinner, we went to the Out of the Blue for what was definitely one of the best meals I’ve had in some time. We tried the gambas al aglio, monkfish with gambas, followed by a hot dark chocolate brownie. Truly delicious.

A little achy we checked out and wandered the beautiful boutiques that have becomes synonymous with villages like Dingle, selling Irish-made products like pottery, jewelry, and clothes. We then popped into the neatly designed and strangely urban Bean in Dingle for a serious cuppa Joe and on to the now-famous Murphy’s Ice Cream where I tried their sea-salt ice cream before we jumped on the bus to get the train back to Dublin. 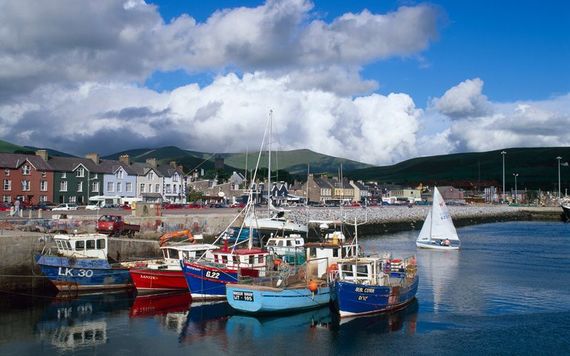 Regrettably, I come from the Ryanair generation and while growing up at every opportunity I was on a plane to Europe instead of enjoying our own gorgeous island. This trip has given me a stern lesson...get out and see what’s in store in Ireland.

Only one word describes it ... Magic.

WATCH: Castlegregory - the "Gold Coast" of the Dingle Peninsula