Stay somewhere flashy: the Lighthouse at Fanad Head in Donegal 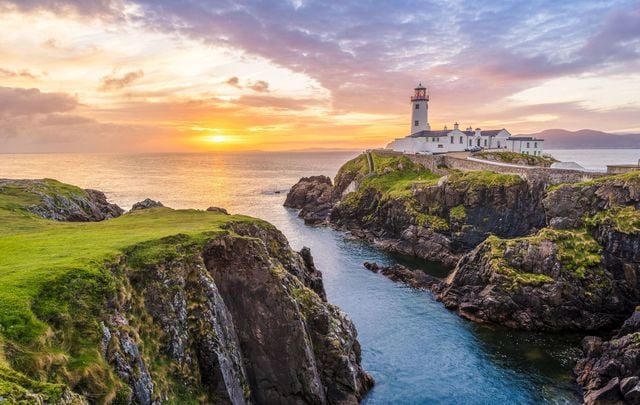 The magnificent Fanad Head Lighthouse, County Donegal is one of the most photographed lighthouses in the world. Getty Images

It can be found at the top of a rocky headland on the Fanad peninsula in County Donegal, Ireland.

That narrow road will lead you up to Fanad Lighthouse, or as it's called in Irish, Teach Solais Fhanada, the last stop before the north Atlantic. 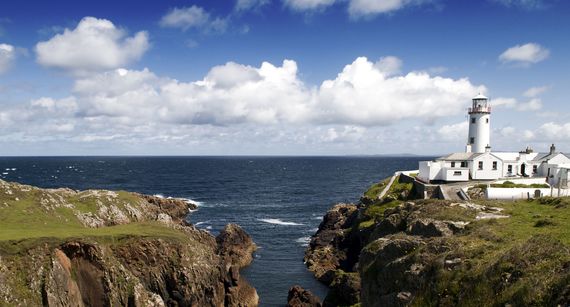 Featuring panoramic views of Lough Swilley and the Wild Atlantic Ocean, the lighthouse is located on its own little promontory and offers uninterrupted views of the land and sea that stretch for miles.

And the most amazing thing of all? You can have the place almost completely to yourself. There are few places left on earth where that kind of solitude can still happen.

On the afternoon we traveled up to Donegal on December 23, we saw the great light from the lighthouse piercing the dense fog that had gathered before we could make out the building itself, which was first lit in 1817. As arrivals go, it was atmospheric and picture-perfect.

We immediately took in the striking building, which has justifiably been voted one of the most beautiful (and most photographed) lighthouses in the world, and then noticed the lighted Christmas tree in the window, a thoughtful touch added by the Bainisteoir (Manager) Eimear Ni Mhathuna.

We received another warm Donegal welcome from the groundkeeper on arrival, who showed us to our extensive rooms featuring a walk in kitchen, a dining room, a living room with a working fireplace, a full bath and shower room, and a cosy queen size bedroom with a view of the light and the ocean.

After a brief tour of the facilities we were left alone to unpack and stock the refrigerator for the holiday visit. But being Irish born I did the thing the Irish do upon arrival anywhere, I made tea.

Sitting down at the big country table we noticed something unexpected, this far out on the peninsula the fog was lifting. That made us curious so we stepped outside, mugs still in hand, to get our bearings. 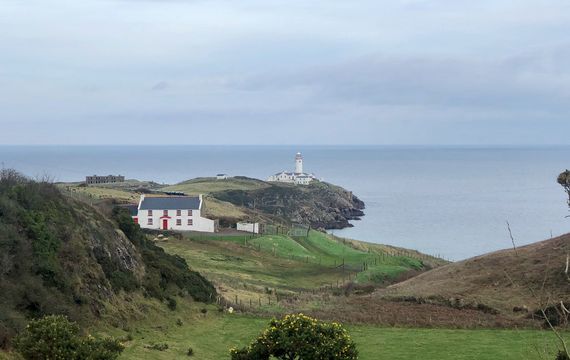 Our rooms were on the east side of the house so we walked west to a gable wall that then led north to the lighthouse tower itself. Once we reached that little headland we were rewarded by the biggest, brightest full moon we had ever seen.

It seemed to float just above the surface of the water and it was so big and so bright it left us speechless with awe.

Then I did the thing that New Yorkers do when confronted by something tremendous, I opened my iPhone and started taking pictures, but I quickly gave up when I realized that no camera anywhere could do justice to the poetry I was seeing all around me.

This far out, on the very edge of Ireland, the land and sea work their magic on you before you have a chance to resist (and why would you?). I have traveled far and wide but I have never, and I mean never, been anywhere this beautiful and this unspoiled.

Something as primal and pure as the moon and sky seen from a Donegal lighthouse can hit you like a two by four to the heart.

I was poleaxed. My eyes were quite literally full of stars. Out this far from the towns and cities, there are no streetlights to dim their shine (or indeed your own). Out this far you can reconnect with what's above you and around you. You can not put a price on that gift.

“I think I might see a whale,” I said, looking at something moving out in the inky water. “It's possible,” my husband replied. Whales and dolphins are a common sight out here at certain times of the year, he read. 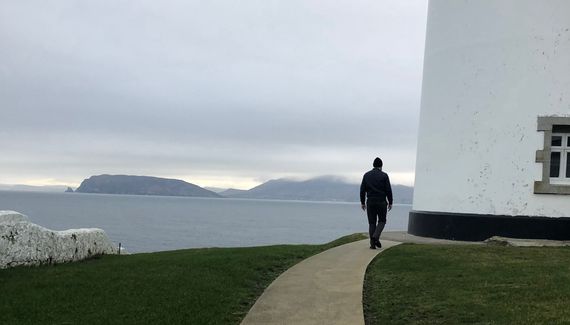 The night was unusually warm. 55 degrees in December courtesy of the Atlantic currents that keep temperatures fairly stable year around. Back in New York we would probably have been freezing, but here in Donegal my winter coat felt too warm.

Don't miss out on the daily scheduled lighthouse tours by the way, because they feature a deep dive into the history and function of the lighthouse over the centuries and it will also take you up the impressive cantilever steps built into the tower of the lighthouse itself, for a panoramic view of the entire peninsula.

If you have ever had a romantic dream of yourself as a lighthouse keeper the terrific museum attached to the main lighthouse will give you an educated sense of what daily life must have been like here for generations of them.

Stepping back indoors to a roaring fire in the living room that features high-backed armchairs and stunning views of Inishowen, I have rarely felt so at peace in a place.

There is a reason for that. Donegal has long been a place apart. Left to its own devices for so Donegal has maintained a pristine, untouched quality, and you can drive for miles and not see much evidence of human life or the tourism industry anywhere.

But that unspoiled beauty and remoteness is part of its unique appeal and now the whole world (including Star Wars, which was filmed on the Inishowen peninsula, and National Geographic magazine, which called it 'the coolest place on earth') have taken note.

The next morning we awoke early and I made coffee and breakfast looking out at the still Christmas Eve morning.

It's was so bright and fresh outside I decided to take the air when I found a moment. The lough and sky seemed to be a thousand vivid shades of blue and grey, it was hypnotic.

Later having breakfast I had a little realization. Irish people don't necessarily notice the sheer quality of the farm-fresh produce they daily enjoy but my goodness I did.

A sandwich I bought at a gas station in County Monaghan on the trip up to Donegal had wowed me with its taste and freshness, a freshness that you simply can't find replicated here in the U.S. even in the most expensive stores. With fewer hands to pass through, the results speak for themselves.

In fact, after the matchless air and light, one of the first things you notice about Ireland is the sheer quality of the food. How fresh the bread is, how fantastic the flavors of the meat and vegetables are. On the small island, there is minimal processing, so farm to table is a real thing and you will immediately notice the difference. 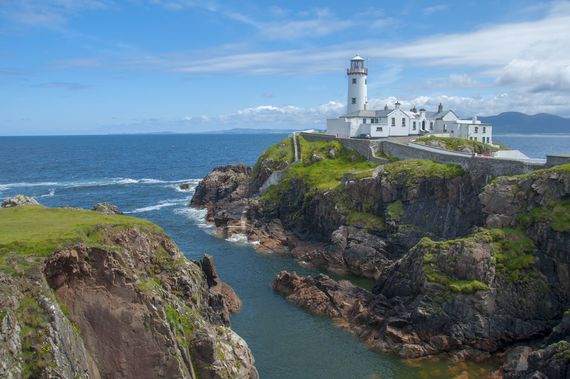 We didn't sign up for a digital detox but now that we had no alternative we weren't complaining either. For days we had nothing to do but watch the light on the water or go for long walks or cook a bumper Christmas dinner (the kitchen is so well stocked that this was a breeze).

At night we opened a bottle of red wine and sat by a roaring fire and talked about the people we missed from past Christmases and the people we would meet over this one.

It was heaven. Literal heaven, I don't think I have felt so restored to myself, so at ease and at peace, in years. Donegal teaches you how to take your time, and it reminds you what your time is for.

I fell back into its ancient rhythms before I knew what was happening to me. It's a gift they don't advertise but they should.

Here's another thing they don't advertise about Fanad Head. If you walk up the little hill the lighthouse leads to it will lead you toward a giant landscape that overlooks the lough for miles and miles on three sides.

Few people have ever lived up there and very few pass through it so it simply hasn't changed since the time when Cleopatra was a girl. 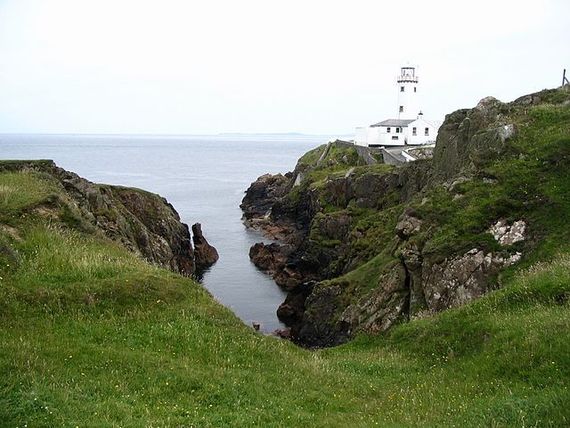 On Christmas Day 2018 my husband and I took a walk through a landscape so beautiful that I am almost reluctant to share it with the world for fear that the word will get out. But like the aforementioned Cleopatra, beauty this world-shaking rarely stays a secret long.

I have been to Big Sur and to Ben Bulben and the Cliffs of Moher, but I have never seen a place so majestic and so completely unspoiled. It felt like the nativity of the world up there.

Christmas day was the perfect day to view it. I was stunned by its raw beauty and it is now one of the greatest memories of our trip. (And we recommend you pop into to the friendly Lighthouse Tavern for a Guinness on the way home, where the fish and chips feature fresh-caught hake).

Now I have taken many trips around the world and many trips to Ireland too, but I have never been in a place more beautiful than this landscape and this magnificent lighthouse. It was warm enough for a bomber jacket and a hat most days (but remember take some sturdy boots for a hike).

Returning to the lighthouse you can see its light far ahead on the headland on the walk home. Lucky us, we live there, you'll think as you return to it. Book it now but please keep it a secret. Fanad Lighthouse will quickly become a repeat destination not just for a holiday, but also in your heart.

For more information and to book a stay at Fanad Lighthouse, click here.

How to get to Fanad Lighthouse:

Take a quick Aer Lingus flight from JFK for a 9.10 A.M. arrival in Dublin (perfect timing to catch a just made that morning Irish breakfast).

The next phase of the journey is the easiest. Hire a car or hop on board a Bus Eireann (you can catch one right at the airport) to Letterkenny and once there load up on yummy provisions for your stay at the local Tesco supermarket located just across the road from the bus stop (they'll let you store your carry-on's behind the desk whilst you shop).

Then hop in a cab to reach your final destination: Fanad Lighthouse, the still-working lighthouse (it was automated in 1983) at the top of the peninsula. You're home.