Turning the lighthouses of Ireland into breathtaking poster art 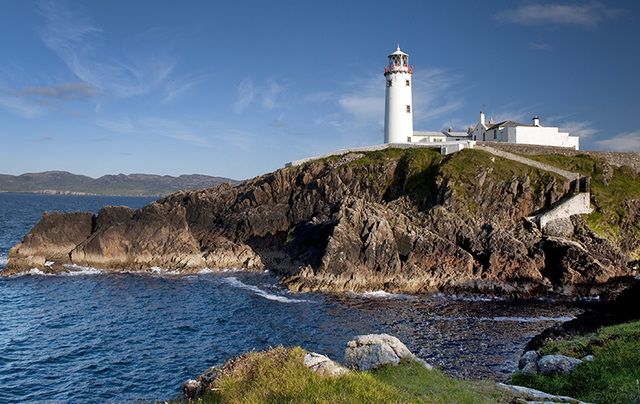 Ireland boasts many of the most dramatically beautiful lighthouses in the world and now an inspired Irish artist has created a series of instantly iconic new posters to celebrate them in all their wild beauty.

When artist and illustrator Roger O'Reilly, who is based in County Kilkenny, had the brilliant idea to create a series of dramatic posters celebrating Ireland’s lighthouses in the style of classic old railway posters he took on a project that would eventually circumnavigate the Irish coastline.

Meticulously designed and illustrated throughout, the results of his efforts are striking and increasingly sought after.

One typically eye-catching lighthouse design is of Inishtrahull in County Donegal. Located just 10km (6 miles) north east of Malin Head (Ireland's most northerly point), the island rises up dramatically from the swelling Atlantic and is composed of the oldest rocks in Ireland, which are almost two billion years old.

Complimenting his artistry, O’Reilly is also a historian of place and he posts a blog that explores the rich history of each lighthouse he illustrates.

Take the breathtaking Fanad Head lighthouse which marks the entrance to Lough Swilley (the deepest fjord in Europe). It’s located in scenic Araheera, within the Donegal Gaeltacht (an Irish speaking area). “No wonder it’s a highlight of the Wild Atlantic Way,” writes O’Reilly, who captures the lighthouse in all its dramatic beauty.

Read more: The strangest places to stay on vacation in Ireland

The Fanad lighthouse is now also a guesthouse so you can actually come and stay in one of the most heart-stoppingly beautiful locations in Ireland – or anywhere frankly – and enjoy world class dining at the nearby four star Rathmullan House.

O'Reilly is an internationally acclaimed artist who has worked for editorial and design clients across the globe, and his lighthouse illustrations were born from his enduring love of the golden age of poster art, he writes.

The Irish lighthouse prints also provide him with the opportunity to create a new series that reflect the rich cultural and natural diversity of Ireland itself. It's also been a lot of fun, he adds.

For more information on the Irish Lighthouse series, click here. O’Reilly has also created a series celebrating Irish cities and counties. Go ahead and visit, you’ll probably want to buy them all.