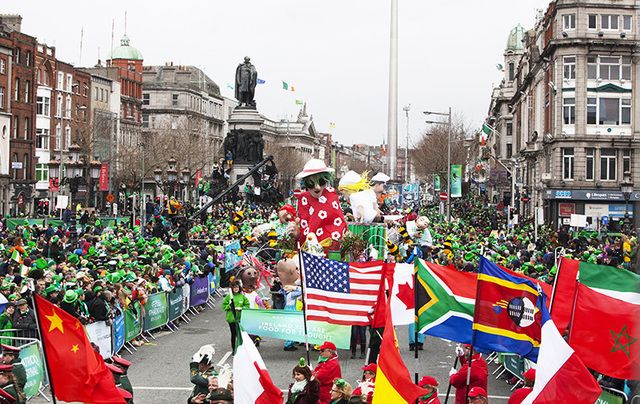 Ireland’s tourism sector is booming and its success can be attributed, at least in part, to the attention the country receives in the run up to St Patrick’s Day.

At least that’s according to Niall Gibbons, CEO of Tourism Ireland, who is the US this week plugging the country as a tourist destination.

Is there any other country whose national day is celebrated across the world in the same way IrishCentral asked him.

“No, there’s absolutely none and we look at our friends and colleagues across the water [in Britain who have] the likes of St Andrew’s Day, St David’s Day, St George’s Day, there’s nothing that compares to St Patrick’s Day - everyone around the world wants to be Irish for just the one day!”

He spoke about about Tourism Ireland’s Global Greening initiative which aims to light up various global landmarks in green to honor Ireland’s patron saint and national day. The first was the Sydney Opera House on “the anniversary that the Irish first arrived in Australia and it created a huge emotional connection when people saw that photograph of a global icon turned green.”

This St Patrick’s Day 300 icons of the world told Tourism Ireland icons they’d be lit up in  green from traditional centers of Irish emigration such as London to more remote, such as Rwanda.

“When we think about the Irish family around the world you’re thinking about traditional markets in the UK, the US, Australia, Canada but the Irish reach has been far and wide and I look, for example, at the statue of Christ the Redeemer in Brazil where there wouldn’t be an Irish diaspora but that statue was turned green by the Archbishop of Rio de Janeiro in honor of the Irish missionaries who did great work for the poor in Brazil.

“In relation to newer markets, obviously China and India are very important to us. They’re very small in terms of numbers now but they are growing. I was delighted to see the Great Wall of China lit up green for the third year and row. It’s something that we wouldn’t have expected a number of years ago. But I always quote quite a funny one, would anyone expect twenty years ago we’d be able to light up Nelson’s Column in London?”

But even if the organization is looking to expand into newer markets, the preeminent one will always be the United States. Despite calls for a boycott of the White House this St Patrick’s Day by many opposed to President Trump’s policies, Gibbons is clear the annual visit it worth it.

“No relationship is made in any one day,” he said. “This is a sign of a long-lasting, warm, friendly familial relationship… I don’t know of any other country in the world where they have a standing day where the President of the United States invites [their leader] to his house and it’s really important the tradition continues. And we have to remember here at home in Ireland that we have 35 million friends and family here in the United States and it’s important that we stay connected with them.”

And the close relationship has seen American tourists flooding in ever increasing numbers to Ireland.

“Last year alone we saw a substantial increase, in excess of ten percent. In the past six years we’ve seen business from the United States increase by about 85%! he told us. “When we look at the profile of visitors coming to Ireland, the biggest spenders used to be the British, they’ve been overtaken by the Europeans, but now the Americans are going to knock the British into third place by 2019 - and they could even do it this year if things keep going the way they’re going!”

Contrary to the popular stereotype, it’s no longer just Irish Americans exploring their roots or checking up on family.

“If I was having this conversation with you ten years ago, I would be talking to you about the 70% of visitors to Ireland having a family connection. Now that’s only 30% and the main growth in visitor numbers is coming from the southern states and California. So the nature of the visitors coming from North America has changed - less about the family and friends and more about the real holidaymakers.”