Irish leader has strong words for Trump on the value of immigrants to the US. 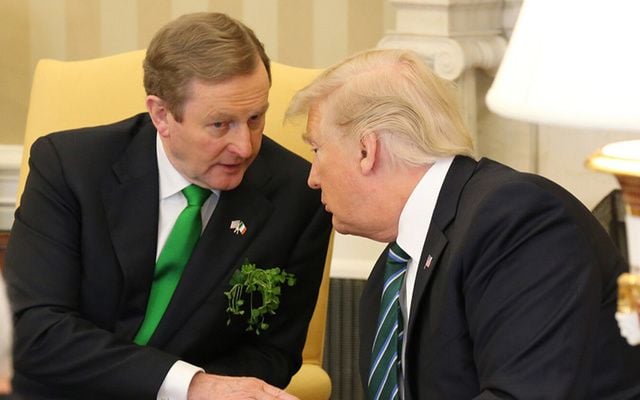 Irish Taoiseach Enda Kenny won himself some fans in the US yesterday among those who disagree with President Donald Trump’s attempts to quell immigration. Speaking just steps away from Trump at a White House St. Patrick’s Day event on Thursday, Taoiseach [Prime Minister] Kenny referenced the time when the Irish were the subject of anti-immigrant views, whereas they are now setting up shop in the US President’s cabinet.

His comments are being heralded as a not so subtle comparison between the Irish who moved to the US in the 19th and 20th century and the modern-day immigrants of other ethnicities, nationalities, and religions who now face the struggle against discrimination we once did.

Also speaking at the Friends of Ireland Luncheon attended by Mike Pence yesterday, Kenny got more to the point in his comments, using Trump’s own phrase “Make America Great Again” to highlight the contribution the Irish and many other immigrants have made to the US.

"I’d just like to say in finality, this is what I said to your predecessor on a number of occasions: We would like this to be sorted. It would remove a burden of so many people that they can stand out in the light and say, now I am free to contribute to America as I know I can. And that’s what people want," Kenny said.

"We were the wretched refuse on the teeming shore," Irish prime minister says with Donald Trump in the room. pic.twitter.com/7jEfTVvIzE

"There are millions out there who want to play their part for America — if you like, who want to make America great," he said to laughter.

"Heard it before? Heard that before?" Kenny asked.

Whereas Trump spoke of how America would remain a loyal friend to Ireland when he met with the Taoiseach on Thursday, Kenny’s comments took on a considerably stronger tone.

“It’s fitting that we gather here each year to celebrate St. Patrick and his legacy. He too, of course, was an immigrant. And though he is, of course, the patron saint of Ireland, for many people around the globe he’s also a symbol of — indeed the patron of — immigrants,” the Taoiseach said.

“Here in America, in your great country, 35 million people claim Irish heritage, and the Irish have contributed to the economic, social, political, and cultural life of this great country over the last 200 years. Ireland came to America because deprived of liberty, deprived of opportunity, of safety, of even food itself, the Irish believed.”

Kenny continued to highlight the state in which many Irish people would have arrived in America in less fortunate times. Despite the number of Irish who may have made a move to the US following the financial crash for financial and economic reasons, their plight was not as severe as the famine Irish who arrived into the country poorly educated, impoverished, hungry, and often extremely ill.

“And four decades before Lady Liberty lifted her lamp, we were the wretched refuse on the teeming shore,” he said, a phrase which some feel is referencing the Syrian refugee crisis and refugees' attempts to cross the Mediterranean Sea to escape.

“We believed in the shelter of America, in the compassion of America, in the opportunity of America. We came and we became Americans. We lived the words of John F. Kennedy long before he uttered them: We asked not what America can do for us, but what we could do for America. And we still do.”

The Taoiseach had faced much criticism before his St. Patrick’s Day trip by those who felt the Irish should not associate with Trump or gift him with the traditional annual bowl of shamrock. Former Maryland governor Martin O’Malley began a petition to boycott the ceremony and called for others to do the same while may have accused Irish-American members of Trump’s cabinet such as Mike Pence, Kellyanne Conway, Steve Bannon and even Paul Ryan of forgetting their Irish roots in their immigration policies.

Worth saying, Kenny's White House visit is being treated as a challenge to Trump by US media. NYT in particular. https://t.co/dWHeOU96iP pic.twitter.com/nV4MNpmnxP

Kenny himself had criticized Trump during his Presidential campaign referring to his remarks “racist and dangerous” in the Irish parliament.

With the Taoiseach expected to step aside as leader of his party in the coming weeks, Trump’s first St. Patrick’s Day in the White House could be Kenny’s last and the Taoiseach’s comments were much more strongly worded than those of the previous seven years’ ceremonies in which he has joked with President Obama and Vice-President Biden.

Victims of the “Know-Nothing” party, Irish immigrants in the 19th and 20th centuries were viewed then much as Latino and Muslim immigrants are viewed today, falsely regarded as a burden on the state that contribute nothing to US society and faced with a fear that their religion makes them un-American.

He pays tribute to the Irish emigrants who have been “peerless ambassadors” for our nation over the centuries, reflecting on how emigration to Ireland is now having the same effect on our country through the passion, energy, and commitment of new groups in our society.

What did you think of Taoiseach Enda Kenny’s remarks? Let us know your thoughts in the comments section.