This major New York landmark is joining the world in going green for St. Patrick’s Day

From the tallest building in the Western Hemisphere to Sydney - the world will literally go green for Ireland’s national holiday. 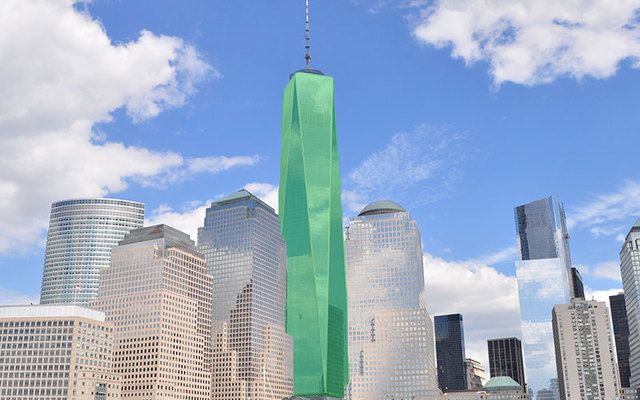 One World Trade Center in New York is set to go green for the Global Greening 2017, for St. Patrick's Day.

One World Trade Center in New York, City Hall and Heron Tower in London, Plaça de Catalunya in Barcelona and Cloth Hall in Ypres will join Tourism Ireland’s Global Greening for St. Patrick’s Day 2017, for the first time. A full list of the historic buildings, stadiums, statues, castles, and towers around the world which will be lit up in green for St. Patrick’s Day has been released.

It’s a phrase that tends to be used too often but considering the island of Ireland only has a population of 6.4 million we really do punch above our weight and this is never most visible than on St. Patrick’s Day.

The new sites will join some ‘old favourites’ which have gone green in previous years – including the London Eye, Nelson’s Column in London, the Colosseum in Rome, the Leaning Tower of Pisa, Burj al Arab in Dubai, the Roue de Paris, the ‘Welcome’ sign in Las Vegas, Niagara Falls, the Empire State Building in New York, the Sky Tower in New Zealand and the Great Wall of China.

This year Chicago will be going all out to celebrate St Patrick and Ireland once again this year, with numerous buildings and sites across the city set to light up green – including Navy Pier, the John Hancock Center, the Wrigley Building, the Civic Opera House, One Prudential Plaza and Chicago Gaelic Park.

The new landmarks for 2017 include:

- The fountains on Gran Via in Barcelona

- The four principal monuments in the town of Cosenza (Calabria)

- The Cloth Hall in Ypres

Minister of State for the Diaspora and International Development, Joe McHugh TD, said "The willingness and desire of so many to be involved in celebrating our national day is symbolic of the great friendship and respect that exists between Ireland and so many countries around the world and demonstrates the uniqueness of the St Patrick’s Day celebrations. The celebrations allow us to deepen existing friendships, to strengthen awareness of Ireland and our rich heritage and to forge new ties.

“Tourism Ireland’s Global Greening creates a visual calling card, a reminder of home to our Diaspora spread across the globe and sparks the interest of those as of yet unfamiliar with the great heritage that our national day celebrates. As Minister of State for the Diaspora, I know that the “greenings” bring great pride to Irish people overseas and reflect the warm regard in which Ireland and its people are held around the world.”

Here is a full list of those landmarks around the world going green for St. Patrick’s Day:

- Niagara Falls (on both the Canadian and US sides)

The Colosseam in Rome lit up green for St. Patrick's Day.

- Palace of Culture and Science, Warsaw

- Fountains on Gran Via, Barcelona *

- The Rhine Falls, near Zurich

The Global Greening 2017 is Tourism Ireland’s first major promotional drive for 2017 to grow overseas tourism in 2017. The annual initiative, which sees a host of major landmarks around the world turn green for St Patrick’s Day, has grown from strength to strength, with lots of new landmarks signing up to take part this year.

Niall Gibbons, CEO of Tourism Ireland, said “This is the eighth year of Tourism Ireland’s Global Greening initiative …The success of our Global Greening initiative is due in no small part to the great work that has been carried out across the world by Irish people down the generations and, in particular, to the great support we’ve received from the Irish embassy network and the Diaspora.

“The eagerness of cities and countries everywhere to take part underlines the strength of the deep connection that people all over the world feel to Ireland. More than 70 million people around the world claim links to the island of Ireland and St Patrick’s Day is a truly unique opportunity to reconnect them with their heritage.

“People across the world instantly identify St Patrick’s Day with the island of Ireland and that heightened profile allows us to put the Ireland holiday experience in the spotlight – from Auckland to London and from Rome to Rio de Janeiro. Our St Patrick’s program this year will span Great Britain, Mainland Europe, North America, Australia, as well as emerging tourism markets such as China and India. There will be saturation coverage of the island of Ireland across the airwaves, in newspapers and digital media – and that’s an invaluable boost at this time of year for our overall tourism marketing drive for 2017."

Read more: Ireland is having its best year ever for tourism