Cliffs of Moher, Macgillycuddy's Reeks, and Dublin city! We all know the largest and biggest tourist attractions but what about the number twos? 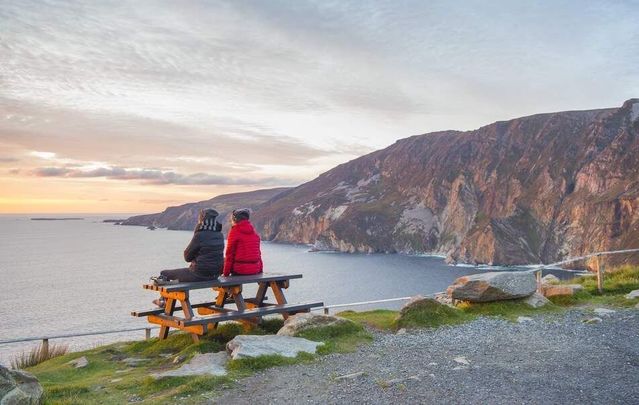 Some of the best-known destinations have serious competition from the second in line. Deanna O'Connor shares some of Ireland's best-kept secrets.

The best known: The Cliffs of Moher, County Clare

The best-kept secret: The Cliffs of Sliabh Liag, County Donegal 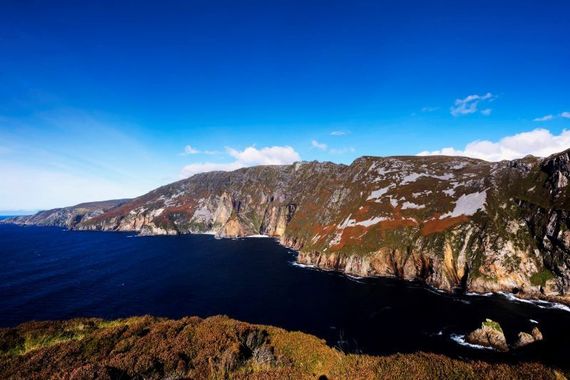 The best-kept secret: The Cliffs of Sliabh Liag, County Donegal.

The Cliffs of Moher are one of Ireland’s best-known tourist attractions, and undoubtedly, they are stunning. However, the lesser-known sea cliffs on the side of Sliabh Liag (or Slieve League in English) mountain in County Donegal are almost three times higher. The stunning scenery on the walk towards them offers views of the Atlantic Ocean, the Sligo Mountains, Donegal Bay, and across to County Leitrim. From the top of Sliabh Liag, the cliffs are at a height of 609 meters (1,998 ft) above the Atlantic Ocean waves crashing in below.

For the views, you can skip the walk and drive directly to the Cliffs Centre, where you’ll find lots of information on history and culture, a well-stocked craft shop and if you’re lucky you might even catch a traditional music session.

To get the most out of walking in the area, it’s advisable to book a local guide who will have lots of fascinating anecdotes to share. Experience in mountain and hill walking is advised for those who venture out to reach the top of Sliabh Liag along One Man’s Pass and the Pilgrim’s Path.

The ancient pathway is thought to have been a place of pilgrimage even before Christianity came to Irish shores and there are still remains to be seen of the early Christian monastic site high on the slopes of Sliabh Liag. It is thought to be associated with an ancient legend of two boatloads of Egyptian Coptic monks, who set sail and were never heard from again until a professor from Iceland came across an old illustrated manuscript which contained a description of a voyage and the place the monks had left. A delegation came from Iceland, in 1948, to tour Teelin, Sliabh Liag, and the surrounding areas and confirmed it matched the manuscript’s description—the adventurous monks had sailed from Teelin around 400 AD.

Another fascinating reminder of Ireland’s history is the word Eire spelled out in stone on the ground. During World War II, although Ireland was neutral, it allowed a free fly zone for allied aircraft, and the stone wording was placed around headlands across County Donegal as a navigation aid. 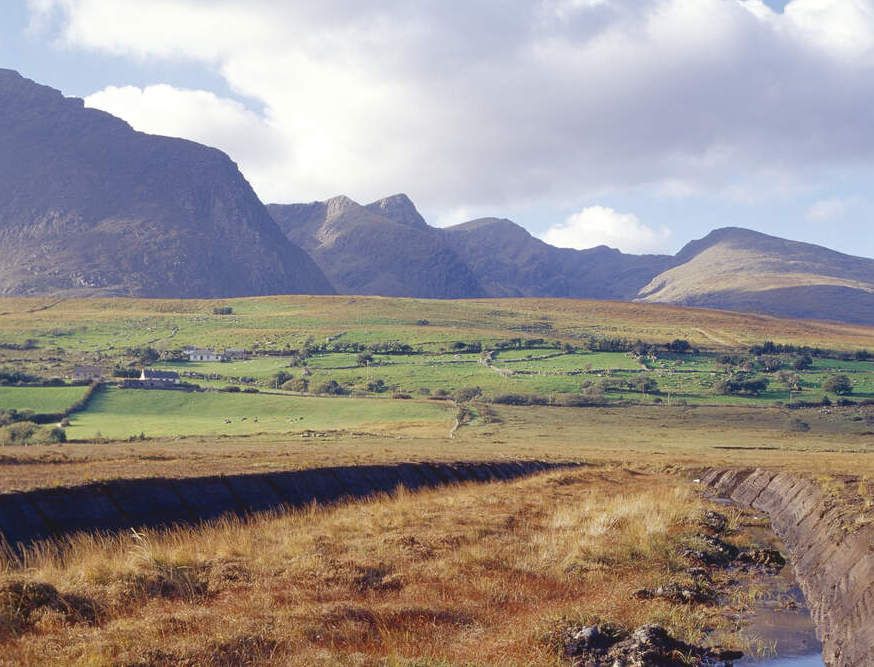 Climbing Ireland’s highest peak, Carrauntoohil, is very achievable during the summer for anyone with a decent level of fitness and a good pair of hiking boots. It’s advisable to book a guided ascent with a reputable guide such as Piaras Kelly, who runs Kerry Climbing. Piaras is also a member of the mountain rescue team and knows the mountains like the back of his hand, taking more experienced mountaineers out on ice climbs during the winter months.

The next highest peak outside of the McGillycuddy’s Reeks range, is Mount Brandon, still within County Kerry, on the neighboring peninsula, near the popular tourist destination of Dingle town. There are a number of different approaches of varying difficulty and length, so depending on which angle you tackle it from it can be anything from a four to six-hour journey. You can book a guided ascent, leaving from Cloghane on the north side of the Dingle Peninsula, but it is quite simple, direct, and less of a challenging walk to tackle from the Dingle side, if you want to take it on without a local guide.

The summit of the mountain has long been known as a place of pilgrimage, and in Pagan times the harvest festival of Lughnasa was celebrated here. The mountain is now named after St Brendan the Navigator, who is said to have spent time here before setting out on his legendary voyage.

The path up the mountain from Ballybrack, just a few miles outside of Dingle town, is marked out by 14 stations of the cross, providing welcome natural resting points to break up the walk. They are numbered too, which helps to track progress.

As always, in the outdoors in Ireland, you need to be prepared for the weather to change for the worse. A local tip is to start off early in the morning as the cloud tends to come down on the mountain after noon.

The hike is a rewarding one, with the strenuous effort rewarding the weary hillwalker with stunning 360-degree views including the Blasket Islands. On a good day, the views have been said to extend as far as the Aran Islands, off the coast of Galway to the north and all the way south to the Iveragh mountains, out into Cork. If you want to add to your walk, you could also take in the ancient Cosáin na Naomh path, which leads from the beach at the village of Ventry, (where pilgrim boats once landed), to start their journey towards Mt Brandon. 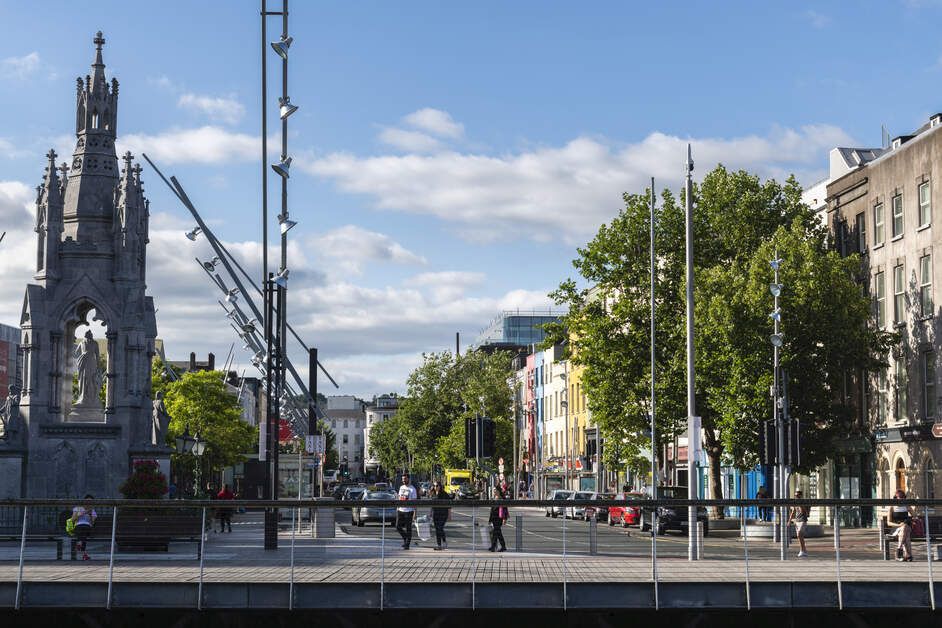 Any resident of Cork will tell you, in the distinctive sing-song accent, that they consider it the real capital of Ireland.

Cork people’s pride in their city is strong. With a booming science, pharma, and technology cluster around the city, it has brought an influx of vibrant young professionals to the area, with the shops, restaurants, and social life to match.

Boutiques like Olori (131 Oliver Plunkett Street) house the chicest of international design alongside Irish designers like Roisin Linnane. It adds to the city’s reputation for style, built by stalwart favorite Samui (17 Drawbridge Street), which has long been a favorite of fans of brands such as Goat, Yves Salomon and Dries van Noten.

Cork’s reputation for food is unmatched, with the infamous Ballymaloe Cookery School and restaurant, one of the cornerstones in the Irish food scene, just 20 minutes drive from the city center. In the city center, the Japanese haute cuisine of Ichigo Ichie (No5 Sheares Street Tel: +353 21 427 9997) is a must-visit for foodies. Chef Miyazaki’s original restaurant/takeaway, Miyazaki (1A Evergreen Street. Tel: +353 21431 2716) provides a more budget-friendly option, and the lemon ramen is the stuff of legend.

Not forgetting the English Market on Princes St, which is worth a stroll around to soak up the atmosphere even if you aren’t shopping for provisions.

For music fans, a great time to visit is during the citywide Sounds from a Safe Harbour Festival (soundsfromasafeharbour.com).

The last installment of the biennial festival was curated by local actor Cillian Murphy, and a variety of free and ticketed concerts took place in venues across the city ranging from the LE James Joyce, (an Irish naval ship), to Crawford Art Gallery to the atmospheric St Luke’s Church.