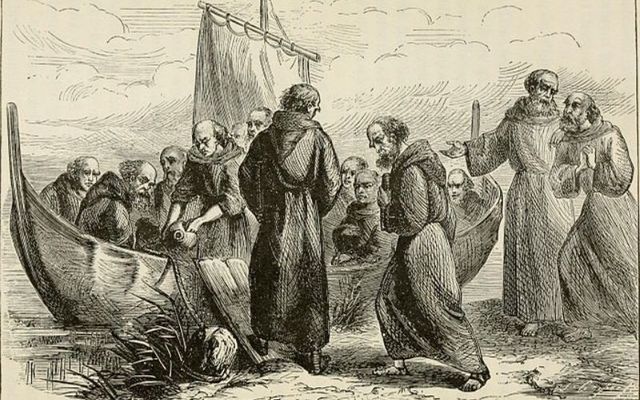 Saint Brendan and his monks set sail for a western land. Wikimedia Commons

The Irish monk St. Brendan was born around 484 at Church Hill, on the north shore of Tralee Bay in Co Kerry, Ireland. He had an exceptionally long life – 93 when he died in County Galway – as well as an exciting and event-filled one.

Ireland's national saint Patrick is believed to have died about forty years before Brendan was born, but while Patrick is now world-renowned, it was Brendan who was best known abroad for nearly seven centuries.

This was mainly because of widespread interest in and fascination with 'Navigatio,' the ninth-century account of Brendan’s travels in the Atlantic Ocean.

Part of this fascination was caused by way of a story that seemed to penetrate vast mysteries of the Atlantic – detailing encounters with sea monsters, volcanoes, icebergs, and other adventures – as well as charm and literary skill with which events of voyage and personality of a saint are depicted.

So, did Brendan and his colleagues build a boat made of animal skin, and cross the Atlantic?

Before we hazard an answer to that, it is instructive to look at the life of Brendan. At the age of one, as was the custom of the time, he was sent in fosterage to St. Ita, mystic, and this was the source of a famous and lifelong friendship between two saints.

Brendan belonged to what was known as Second Order of Irish Saints, also described as Twelve Apostles of Ireland.  Because there was another Brendan in this group, our Brendan was distinguished with the title of Navigator. These Apostles of Ireland gave Irish Christianity its distinctive monastic character, which it was to retain for over six centuries.

The monasteries were powerhouses of learning and arts as well as religion, and this was the source for the revival of Europe after its period of darkness and barbarism which followed the collapse of the Roman Empire. The monks spread throughout Europe for centuries and left an indelible and enlightened mark on the continent.

“In all, he had 3,000 monks under his rule. His extensive travels meant that his cult was widespread.”

Brendan himself was quite a powerhouse: he set up his main foundation at Clonfert, beside River Shannon, and had four other foundations around the country, as well as in Wales, Scotland, Brittany and Faroe Islands.

In all, he had 3,000 monks under his rule. His extensive travels meant that his cult was widespread, and was to be found in numerous regions across Europe. And age didn’t slow him down.

According to a literal interpretation of Navigatio, Brendan was in his mid-eighties when he set out on the great voyage on the Atlantic that was to last seven years.

So what does world-renowned explorer and author Tim Severin say of this legendary person and his exploits?

As he writes in his book, he found himself and his three-man crew sailing out of Brandon Creek, and within 30 miles off the Kerry coast they were heading into a rising gale, aboard a craft that looked like a floating banana, and was made of leather.

“Her hull was nothing more than 49 oxhides stitched together to form a patchwork quilt and stretched over a wooden frame...Why on earth were my crew and I sailing such an improbable vessel in face of a rising gale? The answer lay in name of our strange craft: she was called Brendan in honor of great Irish missionary, St. Brendan.

“Tradition said that St. Brendan had made a voyage to America,” Tim continues, “and this astonishing claim was not just a wild fairy tale, but a recurrent theme based on authentic and well-researched Latin texts dating back to at least A.D. 800.

These texts told how St. Brendan and a party of monks had sailed to a land far across the ocean in a boat made of oxides. Of course, if the claim was true, then St. Brendan would have reached America almost a thousand years before Columbus and four hundred years before Vikings.

“The obvious way of checking the truth of this remarkable story was to build a boat in a similar fashion (as described in texts) and then see if it would sail Atlantic. So there we were, my crew and I, out in the ocean to test whether St. Brendan and Irish monks could have made an ocean voyage in a boat of leather.”

After fifty days at sea, described in brilliant detail in Tim’s book, Brendan made landfall in New World, on an island northwest of St. Johns in Newfoundland.

News went around the globe: St. Brendan could well have made the same voyage.

An interesting footnote: one of the islands described in 'Navigatio' could well be the Bahamas – the same group of islands where Columbus made his most northerly landfall on his first trip. The bold Christopher made four transatlantic trips in all, and never set foot on North American mainland; instead, he landed in Cuba, Central America, and South America.