Leon O’Cathasaigh, takes us on a bike ride through the Wild Atlantic Way as his revels in the west of Ireland's history, people and culture. 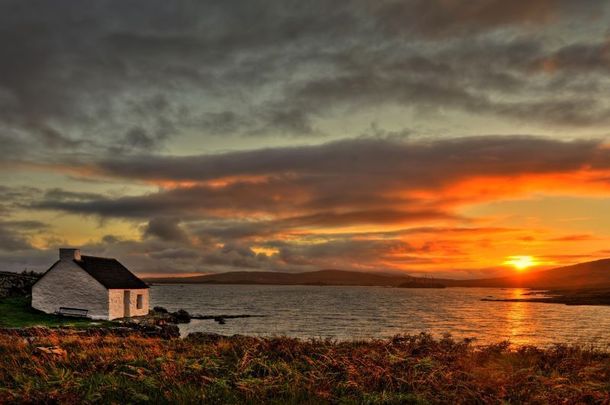 Most people think of the Wild Atlantic Way as the tourist route that spans the western seaboard and attracts many visitors to our shores. However, I can’t help thinking of the ‘wild’ Atlantic way as a characteristic of the people who live along this long stretch of coastline.

You see, I believe there is a big difference between ‘sea’ people and ‘ocean’ people. In Ireland, those who have lived by our seas tended to look eastward to the countries nearby. Scotland, Wales and France were all available by direct crossing. This closeness leads to trade and commerce and interest in other languages and culture. Over the years, sea people developed qualities that reflect these conditions.

In contrast, ocean people looked west over the vast expanse of water and saw no limit. The Atlantic was wild and unpredictable. It was not for crossing to visit neighboring nations. When ocean people put to sea it was out of necessity. Fishing, travel up and down the coast, and between the islands, was and still is, precarious and unpredictable.

Generations of rough seas, frequent storms and perilous cliffs etched wild ways in the people of the west. To be clear, this is the desirable wildness of resilience and resourcefulness. It is a disposition for making the most of limited resources; a toughness derived from constant struggle with a beautiful but bleak environment. This, I believe is the real wild Atlantic way of things.

All of which was very much on my mind during my most recent cycle journey in the west. The three rugged headlands tucked away between Clifden and Leenaun are hidden treasures. My strategy was to follow the coast along each of these and thereby avoid the busy road.

The first part of the journey involved the ominously named Sky Road. I climbed this many years ago and remember the steep ascent and breathtaking views. This time also, the wonderful panorama of the Atlantic coast extended with each section of road. Higher and higher the Sky Road flies over and around the headland and back into the dark green world of rocky outcrops, narrow fields and lazy sheep. 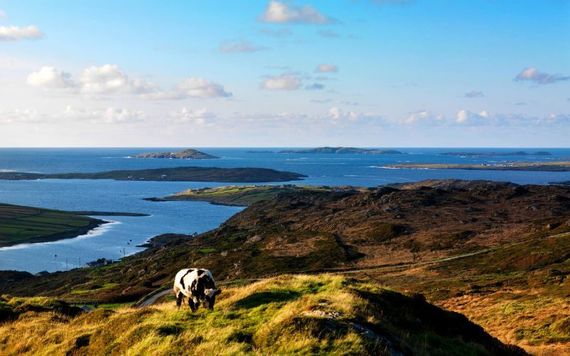 The impact of the wildness is everywhere to be seen, trees bent and stripped bare from the wind. Sea birds hovering over the cliffs, fighting the violent gusts to maintain a stationary lookout. Delicate wildflowers blooming between stones. There is nowhere to compare with the coast of Connemara.

Moving on to the next peninsula, I headed out the long road to Claddaghduff.

I was pushing all the way. The terrain is relatively flat, however, the absence of hills allows the sea breezes to run amok. The road runs between the bog and the shore and is watched over by hundreds of sheep who patrol the rushes and tufts of grass. They seem to wander freely, often slow to move aside; unimpressed by one man on a bike.

Just before Claddaghduff there is a turn for the remarkable Omey Island. At certain times each day you can cross the sands to the island. Tough luck if you don’t heed the warnings, as they say ‘the tide waits for no one’ and many is the time enthusiastic visitors have a long wait for the next low tide. 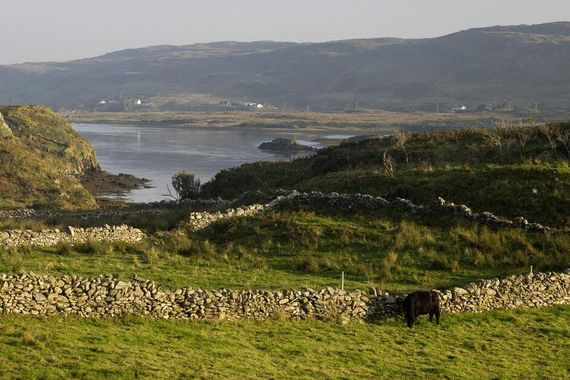 Looping around the top of the headland afforded more sea views. Onwards to Cleggan where the harbor is a staging point for boat trips to the nearby island of Inisbofin. It’s usually a busy place with day trippers parking their cars and heading out on the ferry. Today all was quiet. I sat looking out to the ocean and thinking of stories of the wild people from these parts.

At the time of Henry VIII, there was a feisty daughter of an Irish chieftain. As a child she was strong and brazen and hard to manage. She begged her father to take her to sea but he said her wild hair would catch in the ropes of the ship. So she cut her hair. Even in those days this was a drastic act for a young girl. Her name was Grace O’Malley or in Irish, Grainne Ní Mhaille. From then on she was known as Granuaile which translates as ‘Grainne the bald’! 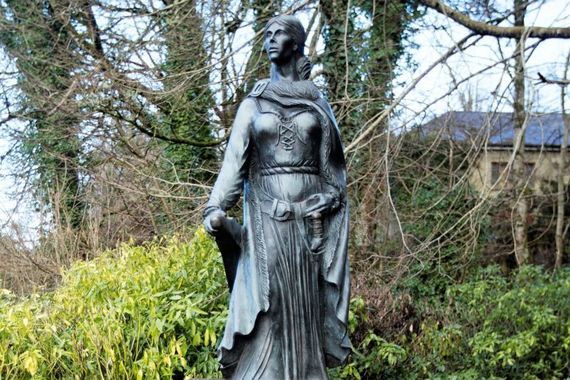 A statue of Grace O'Malley.

Granuaile inherited her father’s Atlantic dynasty and ruled over the western shores for many years. She was famed for seafaring and as a fierce warrior. She commanded many men and controlled the coastline for many years. The English branded her a pirate as she menaced and extracted payments from passing ships. In effect she ran what we would call today a ‘protection racket’ but she was also popular and well respected by the people of the area. She gave them security and looked after them during hard times.

As you might expect, Granuaile had a fraught relationship with the local representatives of the English crown. However, during a time of trouble she appealed directly to Queen Elizabeth and actually visited her at her palace in London. The women were said to have got along fine.

Granuaile was the epitome of the ‘wild Atlantic way’, a bold, tenacious and dedicated leader of her people.

From Cleggan I cycled inland again to get to the next headland. The Tully peninsula is well protected by a great hill that runs along its spine. This makes for lumpy roads and dramatic seascapes. As the weather closed in, dense clouds and misty rain enveloped the area. I stopped to explore an ancient church and graveyard. Many of the headstones were worn away, some surely dating back to pirate times. 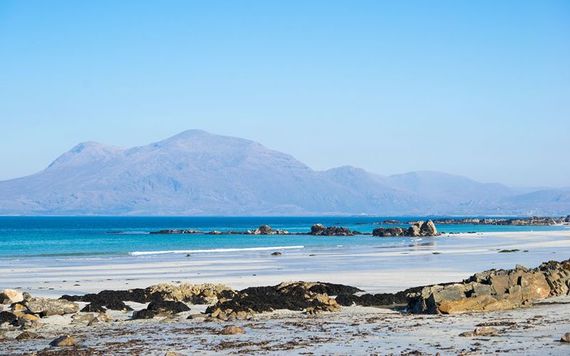 I headed onward toward Leenaun. The sun returned as the westerly wind carried the low clouds off to harry the eastern shores. I raced along the lake shores and savored the sweet smell of the bog. Glorious cycling!

As you approach Leenaun the road follows the long natural fjord of Killary Harbour. My destination in the mountains beyond was the hidden valley of Lough Na Fooey. This gem is often overlooked by visitors. The approach is over a vast blanket bog. As the road nears the rim of the valley the scene below unfolds like a miniature other world. Sweeping green mountains scraped by grey escarpments, a shimmering blue lake in the center and scattered about, the whites of houses and tiny flecks of distant sheep. 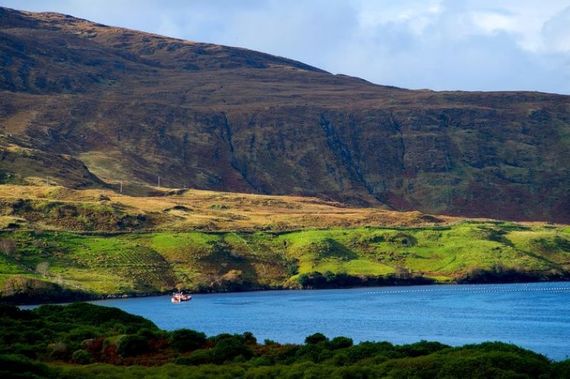 As I descended into the valley, derelict buildings evidenced hard times in former years. It’s one thing to admire a magnificent view on a sunny day and think of beauty and tranquillity. It’s an altogether different proposition to appreciate that it takes a certain wildness to live here and survive in the sparce terrain.

Yes, this the West of Ireland where the fierce ocean and rugged landscapes are, and have always been, utterly enticing for those who know ‘the wild Atlantic way’.

WATCH: Castlegregory - the "Gold Coast" of the Dingle Peninsula