A quiet Christmas In Dingle

This small seaport town in County Kerry is known for its genuine pubs with traditional music and craic, as well as for the warmth of its residents. 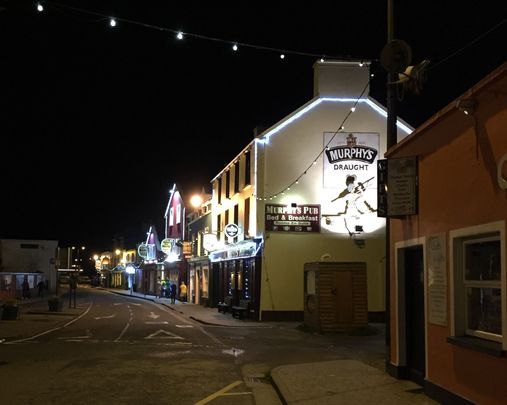 Dingle by the harbor at Christmas. L.McLaughlin

Christmas in Dingle is very special.

Dingle is a small seaport town in County Kerry known for its genuine pubs with traditional music and craic, as well as for the warmth of its residents. It’s an active fishing port surrounded by green hillside pastures typical of the Irish countryside – green even in winter.

I knew Dingle would be the perfect choice for a quiet Christmas in Ireland so I suggested to my wife and two grown kids that we go there for the holidays. We agreed it would be our Christmas gift to each other.

The Dingle Peninsula is part of any smart tourist’s itinerary during the warmer months of the year. It features Sleigh Head Drive which winds around the peninsula from nearby Ventry to Ballyferriter and displays some of the world’s most dramatic shoreline. It’s cliffs and crashing seas form the western-most tip of Europe.The famous Blasket Islands and their “Sleeping Giant” are viewed from the narrow road and rest-stops along the way.

Our winter experience of this beautiful drive was heightened by a blustery and frigid wind. Thank goodness for the small cafe-on-wheels and its proprietor parked at one of the pull-offs. She was serving hot cider and cookies baked that morning from home.

During the winter months, most tourists are gone and the residents are left to enjoy a quiet holiday season. I guess my family and I could be considered tourists by some, but I like to think of myself as an occasional guest – you know, like a distant relative that pops in from time to time. 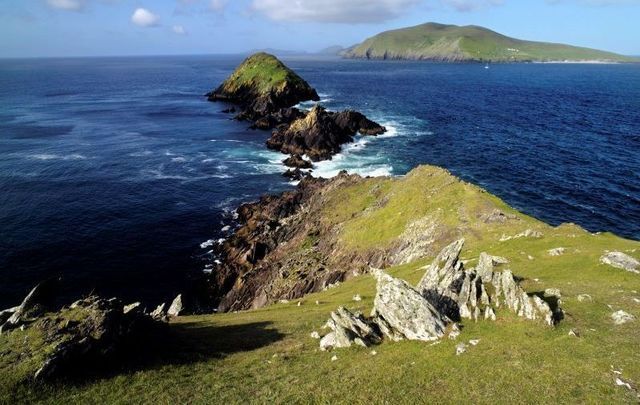 We rented a cottage owned by one of the old families on the peninsula. Griffith’s Cottage was a three-bedroom and two-bath with a sweeping view of mountain slopes and farmlands in the valley below. Flocks of sheep grazed on the slopes throughout most of our stay. It was a white stone cottage with a red Dutch door just on the other side of Mt. Brandon from Dingle. It had a fireplace in which we burned wood and bricks of peat for added warmth.

The Dingle Peninsula is mostly rural and home to a substantial portion of County Kerry’s Gaelic-speaking residents. Much of the signage and news are still in the traditional Irish language. One of the simple highlights of my stay there was the conversation I had with a farmer who lived down the lane from our cottage. He was out working in the front yard of his farmhouse while I was taking a walk one misty morning.

The old gentleman waved a friendly greeting, so I stopped to introduce myself and tell him why I was in the neighborhood. We had a lovely conversation – I think. It was very friendly, but I could only understand a phrase here and there. He spoke with a lyrical mix of English and traditional Irish.

After a day of shopping for small gifts and trinkets (we agreed to limit our Christmas shopping to $20 each), dinner was at one of Dingle’s finest. Some of the best food in Ireland is served in its pubs. Dingle’s are open during the holidays except for Christmas Day. The same welcoming ambiance, traditional music, great food and drink are enjoyed by local patrons year-round. This consistent service is what gives definition to my use of the term genuine, and I personally take comfort knowing it is there whether the tourists are there or not.

Early in the week, we enjoyed great meals and music at John Benny Moriarty’s and Murphy’s. Of course, the welcoming atmosphere in these pubs is accentuated with lights strung about and fires in the fireplace during winter holiday nights.

In Dingle, traveling home at night provides a reminder of the true reason for the season. It’s a tradition there, as with other small towns in Ireland, to place a single white candle in each window to honor the birth of Christ. Candles were present in shop windows and in the windows of almost every home we passed.

On a clear night after dinner, while driving on the road that made a steady rise over the hill to our cottage, I became aware of how widely this tradition is observed throughout the community. The seaside town sparkled in the night with the glow of candlelight in almost every house and window.

Fishermen have sought refuge from life’s many storms in St. Mary’s Catholic Church for over two hundred years. Located on Green Street halfway between the harbor and Main Street, it offers a sanctuary and garden respite in the center of town. To fully appreciate the Irish culture, tradition, and spirit, one must understand the role of the Catholic church in Ireland, especially in its small towns. For centuries, it has effectively woven together Catholic liturgy and ritual with strands of color from the ancient Celtic traditions.

It was the scheduled start time at Saint Mary’s and parishioners were still arriving. Families arrived with their children. Several came directly from the football (soccer) field with boys dressed in shorts and team jerseys under their winter coats. Two red-headed brothers wore their uniforms while singing in the children’s choir. The procession began and our senses were filled with music, incense, and traditional carols.

The service was conducted with readings alternating between English and Irish – what a beautiful way to hear the Word of God. A sermon about the birth of Christ in Bethlehem was delivered by the priest directly to the children, who were periodically asked questions about baby Jesus, the manger, and what happened next. Answers were shouted in reply with simplicity and a beautiful Irish accent.

The service ended with a quiet carol sung by candlelight. Stained glass windows glowed with a colorful presence from the lighting outside. Adults exchanged holiday wishes and children scurried for one last visit with friends, doing well to respect the reverent tone. My family filed out of the nave, through the large wooden doors, and out into the cool night air.

It had begun to snow. We joined the others walking up Green Street to their parked cars. Some had umbrellas. The snow simply fell on our shoulders and hair. Shops along the way had closed earlier in the evening, but their window decorations still shown bright. White lights were strung along the street overhead, swagging from one side to the other.

I pulled my scarf a little tighter and took it all in. The snow was no bother at all. In this moment my family and I were a part of the community, heading home to our Dingle cottage for a peaceful Christmas.