Mike Carney, who was born on The Great Blasket Islands in 1920 and left there in 1937, describes the event that “broke will” of islanders. 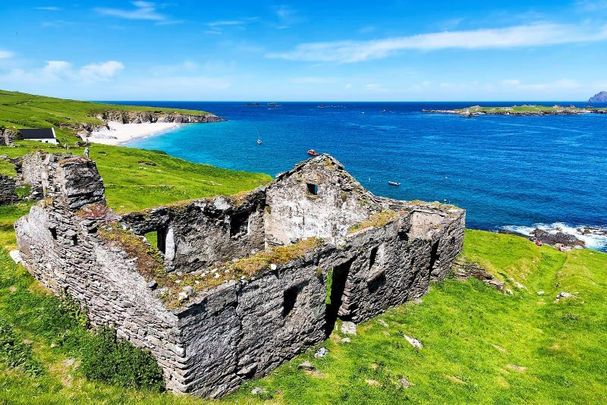 Born in 1920, Mike Carney left his home on the Great Blasket Islands in 1937 to seek a better life in Dublin and joined millions who emigrated to America. He died at age 94 in 2015. Here he describes the event that “broke the will” of the islanders.

My younger brother Seán died on 9 January 1947, at age of just twenty-four. His death signaled the end for the island. Seán got sick just before Christmas in 1946. There was very bad weather on the island with gale-force winds and high waves. He was sick for only a couple of weeks. I got a note in Dublin from my sister Cáit that Seán had flu. But, in reality, he had something much more serious: meningitis.

The weather worsened and they could not get him to the mainland to see the doctor, and the doctor could not get to the island to see him. The battery-operated telephone provided by the government was not working at the time – again. It had been out for about a week. Seán had a really bad headache. He thought his head would blow off! Cáit put a heated sack of flour on his head to try to ward off his temperature, but it did no good. He started to vomit too.

After being sick for over two weeks, Seán’s condition got worse. Then one day, Cáit found him dead in bed in our house. Since there was no priest, she whispered an Act of Contrition in his ear in case he was still alive. Then she had to tell my father. It was devastating.

When I arrived home, Seán’s body was still in our house on the island, poor man. He could not be buried in a small graveyard on the island because it was not blessed. And there was no coffin on the island anyway. We needed to get his body to the mainland. Three young, strong and brave islanders fought fierce ocean to go and fetch a coffin from the mainland. They were the best boatman on the island at the time. The conditions were such that they could easily have drowned. Their great courage was very much appreciated by my family.

After landing in Dunquin, they got a coffin from Dingle but they could not get it back across to the island. The water was just too rough and weight of coffin made navigating a naomhóg back to island too much of a risk. We had to take the coffin from Dunquin to Dingle so it could be brought to the island by lifeboat. When we got to the island, poor Seán, I couldn’t look at him. He was lying dead on the bed in my father’s bedroom. Everybody was crying. We put Seán in the coffin and nailed lid shut. There was no wake; there was no time. The lifeboat was waiting.

We then went back to Dingle on the lifeboat with Seán’s body in the coffin. The waves were still high and it was a very rough ride, and my father came with us, poor man. It was a heartbreaking thing.

When we got to Dingle, medical people said they had to determine the cause of death. My father told them to write down that government killed him. He was very angry and so was I. We felt that government should have installed a better radio system or provided a motorboat – anything to improve the safety of people living on the island. This was just kind of situation we warned could happen.

The funeral and burial were held very next day, four days after Seán died. I was a pallbearer. Seán was buried next to our mother in old cemetery next to the church. It was all so sad.Our family doctor, Dr. Patrick Scully was there but, of course, there was nothing he could do. Dr. Eilís O’Sullivan, Kerry County Medical Officer at the time, had to examine the body and make a finding on the cause of death. It took a couple of hours but her finding was that Seán died from meningitis. Then we had to take body another 12 miles back to Dunquin where Seán was to be buried. We left the coffin in St Gobnet’s Church overnight and that evening we said the rosary for him.

The time had come to tell my father about my emigration plans. I knew that it would mean even more sorrow for him, but I really could not put it off anymore. The time to depart for America was getting close.  America was open for immigration and jobs there were plentiful. In them days, you could leave one job and start another next day. So it all came together, circumstances and opportunity.

Read more: When the Blasket Islanders were evacuated to mainland in 1953

After Seán’s burial, we took a taxi to my aunt Joan Shea’s house over in Coumeenole. During journey by taxi, I told my father that I had written to my Uncle Tom about emigrating to America. I said that I wanted to give my brothers and sisters chance to go to America too. I think my father had seen it coming. He said, ‘Mike, I don’t blame you. You do whatever you think is right. And, whatever you say and whatever you do, make sure you do it right.’ I suppose it was his standard farewell advice. He was highly intelligent in how to lead you and encourage you to do the right thing.

I was exhausted from the whole terrible ordeal. I stayed in Dingle that night and went back to Dublin following day. I slept soundly all way back on the train. My father stayed in Coumeenole with Sheas for a couple of days and waited for the weather to calm down; then it was back to island for him.

Families were very close back then and took care of their own. People were dedicated to their families; it was a commitment within them. My last two brothers to leave island were Martin and Tom. Martin had spent time in England, but came home for a time to help out. He then emigrated to America at age of twenty-one. A short while later, Tom, who had stayed on the island to help my father tend his sheep, also emigrated to America.

At about that time, Cáit then asked my father to move to her house in Muiríoch. My father really had no choice since he was in his late sixties and was too old to function alone on the island. He reluctantly agreed and moved in with Cáit. It was crowded in Cáit’s small house since she eventually had five children of her own. So my father built a one-room addition for himself. He had sold his flock of sheep and invested some of the money in a new addition.

In end, my father wasn’t sorry to leave island either. He was glad to put his feet on the ground. He just packed up everything, left family home and moved to the mainland. He was the last member of our family to leave the island. The evacuation was still months away. For sentimental reasons, he would visit the island for a month or so during summer with Cáit’s husband and their son Seán.

An extract from From Great Blasket to America, The Last Memoir of an Islander by Michael Carney and Gerald Hayes. It is available for sale on www.collinspress.ie