Road tripping the Wild Atlantic Way on the Dingle Peninsula

From sprawling beaches, to archaeological gems, to the picture perfect postcard town of Dingle this has to be one of the most idyllic road trips in the west of Ireland along the Wild Atlantic Way. 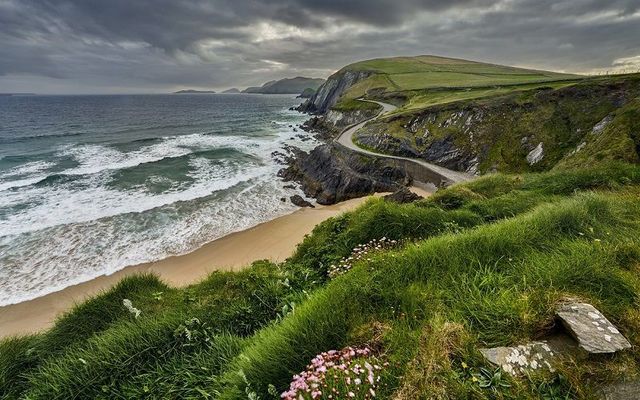 From sprawling beaches, to archaeological gems, to the picture perfect postcard town of Dingle this has to be one of the most idyllic road trips in the west of Ireland along the Wild Atlantic Way.

Ireland has no shortage of postcard-worthy small towns, but there is something particularly charming about the seaside stop of Dingle. The town is situated on the Dingle Peninsula, in County Kerry on the southwest corner of Ireland. Jutting out into the Atlantic, this point is the western most part of the entire country, and all of Europe for that matter.

The craggy cliffs, verdant rolling hills and striking seascapes make a cruise along the peninsula one of the prettiest parts of a drive along Ireland’s famed Wild Atlantic Way.

The 2,500 kilometer route snakes along the entire western seaboard, but a detour to Dingle in particular makes for an ideal road trip.

Read more: Where are the top destinations in Ireland for a weekend break?

After circling the Ring of Kerry, leave from Killarney for Dingle. The first pit stop is at Inch Beach to take in the scenery or even shimmy into a wetsuit to brave the surf along the Irish coast.

The entirety of the Dingle Peninsula has gorgeous ocean views, but Inch is one of the few long stretches of sand along an otherwise rocky coast. The Blue Flag beach has lifeguards in summer in case you find yourself driving through on a sunny day and fancy a dip in the water before setting out further westward.

As you near Dingle Bay, take a short detour down a country road, following the signs for Minard Castle. Set on a windswept outcrop overlooking the Irish Sea, the ruins date back to the 16th century. Three stories of the sandstone structure still stand but it was rendered uninhabitable after it was attacked by Cromwell’s Army in 1650.

Stretch your legs along the boulder-filled beach and then hop over the small stream to explore the outside of the castle walls before continuing into town.

Read more: What towns to visit along the Wild Atlantic Way

The quaint fishing town of Dingle is home to around 2,000 residents. The town is concentrated along Main Street and the coastal road which skirts the inlet. Both streets are filled with pubs and restaurants for a lunch of fish and chips, as well as charming shops. 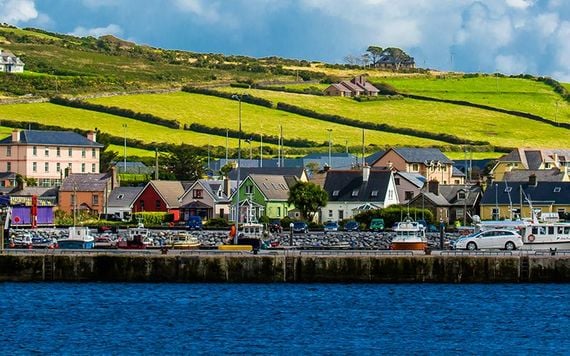 While wandering Dingle, you might find indications that this part of Ireland is a Gaeltacht district – a region of the country that still speaks Irish. The signs and menus will all be in English but don’t be surprised to hear a bit of gossip being traded between locals in Gaelic!

Before hitting the road out of town, refuel with a coffee at Bean in Dingle. This unique shop serves speciality coffee from some of Ireland’s best roasters. Relax with a flat white prior to tackling the hairpin curves that await north of town.

Dingle’s most famous resident actually lives in the bay just outside of town. Fungie the bottlenose dolphin has been a local fixture in the waters along Dingle since 1983. Boat tours leave regularly from the port and offer a chance to spot wildlife, as well as admire the landscape from a new perspective on the water. 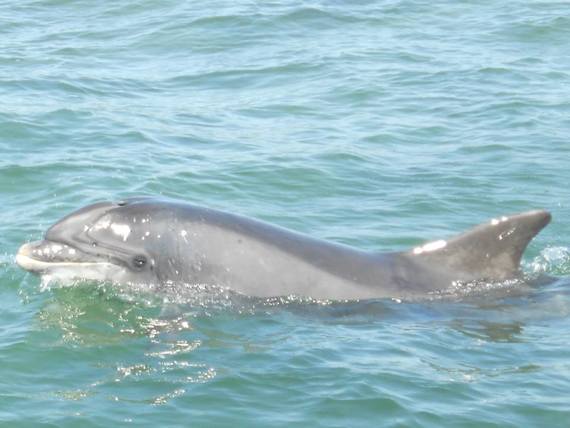 Fungie the dolphin, in Dingle Bay.

Leaving Dingle and curving slowly north shows off the Wild Atlantic Way at its absolute best. The coast road narrows to barely two lanes as the road closely hugs the cliffs of County Kerry. Traffic slows to accommodate for the sharp turns that follow the natural landscape. This welcome change of pace allows for more time to enjoy views of the Blasket Islands which appear around each turn. 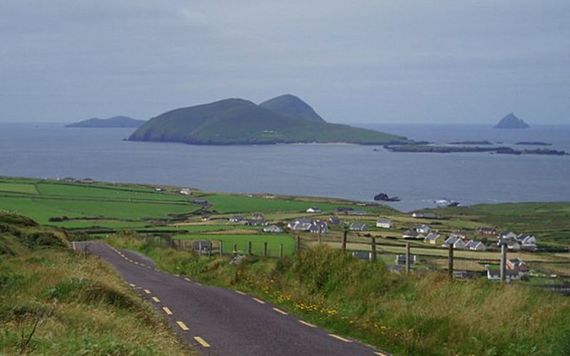 Views of the Blasket Islands, off Kerry.

Leaving behind the towns and villages of the peninsula, the landscape becomes a patchwork of farms where sheep and cows dot the green hills between low stone walls.

The bucolic scenes make it seem like little has changed over the centuries. However, some of the not-so-distant past is also on display as the road winds away from Dingle. 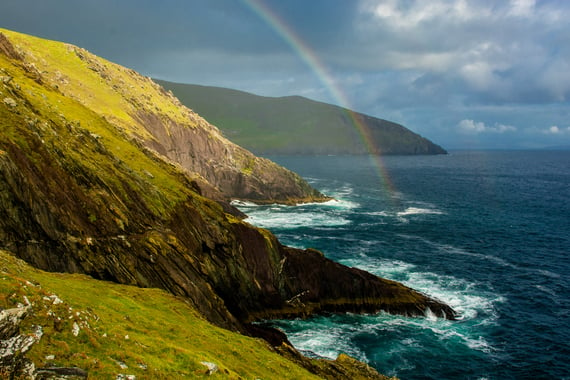 Rainbow at the coast of Slea Head, Ireland

Before leaving the peninsula, make one final stop at the Slea Head Famine Cottages. The stone homes were built in the 1800s and lived in at the peak of the Great Irish Famine. They’ve been preserved and now serve as part of an exhibit dedicated to the intriguing local history.

Ireland’s Dingle Peninsula provides a breathtaking setting for a spring road trip. The journey is an eclectic mix of beautiful scenery, Irish heritage, and coastal roads. The drive is worth it for the wild vistas alone!

Where would you travel to along the Wild Atlantic Way? Do you have any favorite spots? Let us know in the comments section below.