2018 is the busiest year ever for tourism in Ireland

Tourism Ireland reports that 2018 was officially the busiest year ever for tourism in Ireland. 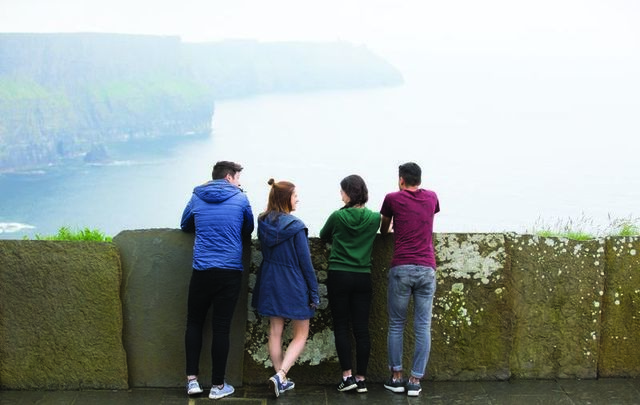 Visitors at the Cliffs of Moher Ireland's Content Pool

2018 has officially been deemed the busiest year for tourism in Ireland.

Read More: Dublin named one of the best places in the world to spend Christmas

The record year is a result of strong efforts by Tourism Ireland, including “campaigns for our regions, Dublin and Belfast and Star Wars, as well as Tourism Ireland’s annual Global Greening initiative on St Patrick’s Day, which was bigger than ever before this year.”

The growth in tourism comes in part to new air routes that have made Ireland more accessible. 2018 saw the first-ever direct flight service to the Asia-Pacific region under Cathay Pacific’s Hong Kong to Dublin service and Hainan Airlines Beijing to Dublin service.

Tourism Ireland reports that there were more than 591,000 direct, one-way airline seats to Ireland available during summer 2018 - a new record, and a 7% increase in capacity as compared to summer 2017.

The Independent reports that with 2018’s record number of tourists traveling to Ireland, Dublin Airport also saw the busiest year in its 78-year history when it surpassed the 30 million passenger milestone.

TD Brendan Griffin, Ireland’s Minister of State for Tourism and Sport, said: “Our focus going forward is to ensure that we continue to grow in a sustainable way and to further build on the success that the regions have experienced through initiatives such as the ‘Wonders of the Wild Atlantic Way’ and ‘The Call of the Wild.’”

“The Tourism Action Plan 2019 to 2021, which is due to be published by my Department shortly, will outline some key actions which will underpin the continued growth of the sector in coming years, as will the additional funding secured for the sector in Budget 2019.”

“The continued growth in tourism over the last number of years is a testament to the great work being done all across the sector and today, I want to congratulate Tourism Ireland on another very successful year.”

Niall Gibbons, CEO of Tourism Ireland, said: “Throughout 2018, Tourism Ireland undertook a packed program of promotions, to bring Ireland to the attention of travelers everywhere.”

“A major focus of our activity was Ireland’s Ancient East, Dublin, the Wild Atlantic Way, and Northern Ireland; other important themes have included screen tourism and, in particular, Game of Thrones and Star Wars.”

Next week, Tourism Ireland will officially launch their 2019 initiative ‘Fill Your Heart with Ireland’ worldwide. The campaign will shine a light on less-visited attractions and locations in hopes of attracting tourists year round.

Gibbons said: “‘Fill Your Heart with Ireland’, presents Tourism Ireland with a great opportunity to drive continued growth to the regions next year and to encourage visitors to travel off-peak.”

Read More: National Geographic has named this county as a ‘best trip’ for 2019

“We are confident that our new campaign will set the island of Ireland apart from our competitor destinations and help deliver another record year for overseas tourism in 2019.”

Are you planning a trip to Ireland in 2019? Let us know in the comments!