Joan Henchy, the chairperson of the New York GAA, tells the Irish Voice how the organization has adapted to playing in a new sort of reality amidst coronavirus. 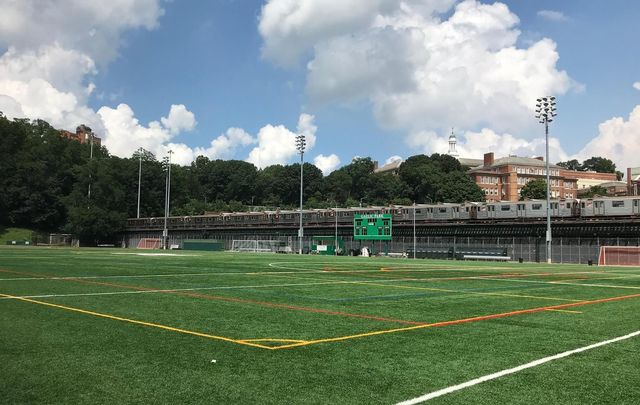 Gaelic Park, the home of the New York GAA in the Bronx.

It's been a year unlike any other for New York GAA, but players finally took to the field at Gaelic Park last Friday to kick off a shortened season that’s full of safety protocols and new rules as the battle against coronavirus rages on.

There were seven games last weekend in hurling and various football championships, with players and officials diligently following a new set of guidelines, New York GAA Chairperson Joan Henchy told the Irish Voice. All going well, finals will take place around the end of September, but if there are any health or safety issues, or outbreaks of the virus, Henchy is prepared to shut down the season.

“It’s nerve-wracking for sure. We’re in the unknown. We are trying to do the right thing and we are happy to be back,” Henchy says.

“But the well-being of our players and officials is of the utmost importance so we are being extra cautious and doing everything we can to ensure that everyone stays safe.”

Anyone entering Gaelic Park in the Bronx is required to wear a mask; attendance is limited to players, officials, and a very limited number of supporters of the teams. Social distancing is required except during play, which is now stopped at 15-minute intervals so that the players can hydrate and the footballs and sliotars can be sanitized.

Officials on the sidelines must wear masks at all times, and players sitting on the benches must keep a social distance. There are also sanitizing stations on the sidelines. Once the games are over the teams must mask up and leave Gaelic Park to make way for the next competitors, and locker rooms are closed.

Dust-ups between players are strongly discouraged. The referee will have a mask around his neck at all times, and if he needs to talk to a player he will pull it over his mouth and nose.

The clubs have been very compliant with the new rules, Henchy says.

“After the lockdown, we kept in constant touch with our clubs and players. We asked if they wanted to return to the field at some point and the overwhelming majority said yes,” Henchy says.

“It’s important for our players to have an outlet, to get some exercise and to take care of their mental health, and the games do that for them. We kept them aware at all times of various New York State rules and guidelines, and when it was safe and legal for clubs to resume training that is we did at the start of July.  We are fully compliant with New York State rules, and we are allowed to play because we are considered recreational under the rules.”

New York GAA clubs are required to monitor players and keep logs for all training sessions which they have done. The logs are especially important, Henchy says, in case a player is infected with Covid-19, and contact tracing would be necessary.

Henchy says “a good number” of New York GAA players have tested positive for Covid-19, with the vast majority of them having minor symptoms and full recoveries. She has recommended that players undergo antibody testing to see if they’ve contracted the virus which would lead to them making informed decisions about whether they should take to the field.

“Some of the players may have been positive and not known. And if the antibody test comes back negative, the players will know that they have to keep their guard up and make an educated choice about what they want to do,” Henchy adds.

Most of the teams have returned to action for the shortened season. One club opted out because the majority of its players are bartenders, many of whom have already endured months without employment but have gradually returned to work.

“They don’t want to risk the possibility of getting sick and having to be out of work again, which is totally understandable,” Henchy says.

Another club has suspended operations because it was reliant on summer players traveling over from Ireland which is now not possible. The strength of the New York GAA, Henchy has always maintained, comes from its home-grown American players.

“If there’s one silver lining in all of this, we can see that our Irish American players are so vital. We need to do more to give them the tools to succeed and to keep them involved in the games all the way to senior level. They are more important to us now than ever,” she adds.

“We love the Irish players who come out on summer sanctions. So do our fans. But we can’t rely on them.”

Clubs that are not able to field players on the day, or ones that choose to withdraw going forward, will face none of the usual penalties, Henchy says.

“This is a year like no other. Those who do not want to play, or can’t play, that is absolutely fine. No punishments or penalties await,” she says.

A doctor will be on hand for every New York GAA game, and prior to games, teams will have to provide a checklist to officials which indicates that to the best of their knowledge, their players are healthy.

“We are being smart and cautious. But we have made it abundantly clear that if we see any cases, or we see a pattern developing, we are shutting down,” Henchy says.

The New York Ladies GAA is hoping to start a shortened season at the end of August with similar protocols. The New York Minor Board has commenced some training but as of yet, no games.

Henchy, the first female chairperson of the New York GAA – she was elected in December – has had a baptism of fire in her first term.

“Well, we joke that I’m the first female chair, and I’m the first to have shut the New York GAA down, too,” she says. “But there was no choice. This virus has no boundaries.”

“So we’ve all been working together and we are hopeful,” Henchy says.

After a brutal five months of living with Covid-19, the Irish community in New York needs a break, Henchy says. Many have returned home to Ireland because of the outbreak, and she fears many more will depart.

“It hasn’t been easy.  Lots of people left. They didn’t like living in apartments and were afraid of what was going on in New York with the virus. In Ireland, at least you can step out your back door for some air,” Henchy adds.

“So now we are back in Gaelic Park at least, and we are excited to be there. And to be safe.”

'Tis the season! Festive and fun things to do in Ireland this winter
How much is the Kennedy family worth?
When Marilyn Monroe called Jackie to speak about her affair with John F Kennedy
County Kerry town named among Europe's most beautiful
WATCH: Fascinating footage of an Irish community gathering peat 100 years ago
Practice mindfulness with these ancient Irish proverbs
Take a look inside this luxury Irish country mansion located on the grounds of Mount Juliet Estate, Co Kilkenny
Wexford fossil discovery is "one of the most exceptional and striking" in the last century
Trinity College Dublin confronting its slave-owner and stolen skull legacies