You've heard of the Fighting Irish! Here's the Irish American minister who survived the Battle of Gettysburg. 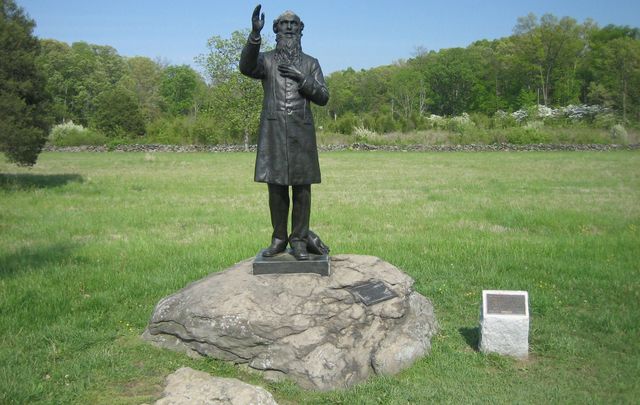 Amongst the blessed men to survive the bloodiest battle of the American Civil War was a priest, the son of Irish immigrants. This is his story.

On the morning of July 1, 1863, outside the prosperous crossroads town of Gettysburg Pennsylvania, 165,000 men began a battle that would eventually result in 51,000 casualties on both sides.  The bloodiest single battle of the American Civil war.

One man who witnessed the carnage of Gettysburg and survived was Father William Corby the chaplain of the 88th New York Infantry, part of the famous Union Irish Brigade.

William Corby was born in 1833, he was the eldest son of Daniel Corby an Irish immigrant who first settled in Montreal, and his Canadian wife Elizabeth. Daniel eventually moved the family to Detroit Michigan where he made a good living as a real estate dealer.

After working in his father’s business, William and his two younger brothers were sent to the new college of Notre Dame in South Bend Indiana. While there, William felt a calling to the priesthood and took his final vows in 1859.

After his ordination, William combined his duties as a parish priest with teaching at Notre Dame.

At the outbreak of the Civil War, in 1861, the Founder of Notre Dame, Reverend Edward Sorin, realized the importance of the Irish helping the Union cause and encouraged his students to enlist in the newly formed Irish Brigades. Sorin also urged William to enlist and minister to the pastoral needs of the men under arms.

A priest goes to war

In late 1861, Father Corby began his army chaplain duties, assisting another catholic priest James Dillion and was assigned to the 63rd New York Volunteer infantry one of the three regiments that made up the Irish Brigade. By the end of 1861, William had his own ministry as the chaplain of the 88th New York.

At the outset of the war, the army chaplains received no pay and William’s family ensured that he went to battle with fine clothes and a good horse.

The 28-year chaplain would in later life, tell of how he was often mistaken for a general because of the steed and his attire. He describes after one long forced march:

"How hath my greatness fallen in one night. Last night I was taken for a General; this morning I am taken for a loafer."

In time the Union army recognized the importance of army chaplains and offered each priest an officer’s commission and pay.

Over the next two years, William fought alongside his flock in the 88th in many of the major battles of the war, such as Antietam and Fredericksburg, where the Irish Brigade earned its fearsome reputation.

While a chaplain, William was also a soldier frequently involved in the midst of the battle, encouraging the men forward.

William believed his ministry was not just for Catholics but for every soldier. No matter where he was, he was adept at improvising an alter offering the sacrament of mass for men who faced death daily.

A chronicler of the time wrote that, "Father Corby was known as the 'Fighting Chaplain"' and that "no spot was too dangerous or too much exposed to the fire of the enemy" for the Irish Brigade's priest.

The carnage of Gettysburg

So, it was as the much-respected chaplain of the 88th that William Corby and the Irish Brigade marched into Gettysburg on July 1, 1863, and took up its position near Cemetery Hill.

At 4 pm on July 2, the Confederate forces attempted a massive assault to outflank the Union forces.

The Irish Brigade was asked to stem the rebel advance.

Just before they entered the fray, a remarkable event took place. Father Corby asked the Brigade commander Colonel Patrick Kelly for permission to address the men.

Climbing onto a large boulder to be seen, William informed the Brigade he would pronounce a general absolution of sins for those who were truly repentant.

Catholic and non-Catholic watched in awe at kneeling men about to go into battle.

He then reminded them of the noble cause for which they fought and that the church would turn its back on those who deserted the flag.

The Irish Brigade then attacked down cemetery hill into the Wheatfield, charging across into the Rose Woods and the Stony Hill.

In fierce fighting, the Confederate advance was temporarily halted just as it threatened to overwhelm the entire Union position.

The brigade low on numbers, due to lack of reinforcements was eventually flanked by Confederate Reinforcements advancing from the Peach Orchard and forced to withdraw back across the bloody Wheatfield. However, by slowing down the Rebel advance the Irish Brigade had played its part in the eventual Union victory.

Father Corby would survive the war, eventually serving two terms as the president of Notre Dame.

He was recalled to Notre Dame in 1865 and a year later he became the president of Notre Dame at just 33 years old.  In 1872 he left to rescue the financially crippled Sacred Heart College in Watertown Wisconsin.

Such was his success that he was recalled to Notre Dame in 1877 for a second term as president.

Disaster was to strike the college on April 23, 1879, when Notre Dame was very nearly destroyed in a fire. Undaunted Father Corby began fundraising to rebuild and the classrooms reopened the following year. William was heralded as the second founder of Notre Dame.

In 1886 he was elected provincial general of the Congregation of the Holy Cross.

At the 25th anniversary of the battle of Gettysburg, Father Corby was given a rousing reception by the surviving members of the Irish Brigade, who never forgot how he inspired them into battle.

In 1893, those surviving veterans of the Irish Brigade nominated Fr. Corby for the Medal of Honor.  Although Fr. Corby did not receive the award, his comrades presented him with a chalice which became one of his most cherished possessions.

In that same year, William published the story of his time in the 88th infantry and his experience of the Civil War in his book “Memoirs of a Chaplains Life”

Father Corby died aged 64 from pneumonia on December 28, 1897.  His coffin draped in the green flag of the Irish Brigade was carried to his final resting place by men from his old regiment. A final salute to their fighting chaplain.

The Catholic Alumni Association wanted to remember the remarkable Father Corby and his exploits at Gettysburg.  They set about raising funds for a statue and this was dedicated on October 29, 1910. This was a depiction of Father Corby blessing the troops and it was mounted on what was thought to be the exact boulder on which William stood and gave the absolution to his comrades. The sculptor Samuel Murray also produced an identical copy that stands in front of the Fr. Corby Hall at Notre Dame.

A fitting tribute to a man of faith, education, and valor.

Read more: Giving thanks for the Gettysburg Address and Lincoln's spectacular words