How the Irish Union soldiers stopped Pickett's Charge at Gettysburg, this anniversary day

The battle between Irish units on Cemetery Hill may be one of the strangest chapters of the Irish story in America. 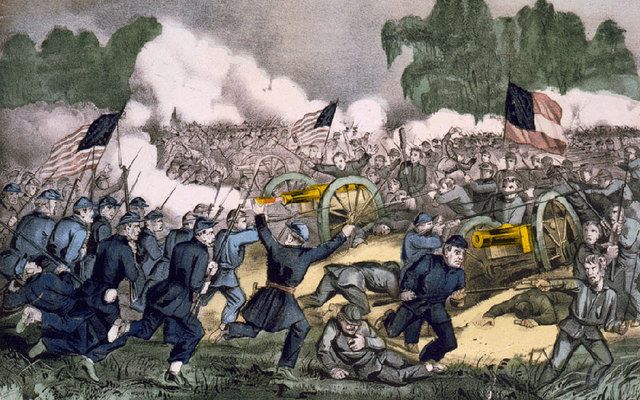 Dr. Phillip Thomas Tucker's book "Pickett's Charge," subtext “New Look at Gettysburg's final attack,” about the turning point of the American Civil War at Gettysburg, reveals the incredible Irish underpinning of the day that changed America forever: Pickett’s advance on the third day of the battle on July 3, 1863.

Lincoln’s subsequent Gettysburg address delineated what was at stake. The young Republic was “four score and seven years” in existence, democracy still an untried proposition in much of the world. If the rebels had succeeded, democracy would have gone down with the Union banners. The British were likely ready to recognize the south. The stakes were that high.

Leading the Union Army was General George Meade, an Irish Catholic blocked for promotion several times by Know Nothings within the Union Army. His cool handling and unflappable demeanor served his men and the Union well over the three days.

Understandably, the author’s writing is intense and concentrated.  Tucker's 375 pages are almost entirely devoted to what happened across a square mile patch of Pennsylvania farmland on July 3 where the shape of a nation was decided.

Controversially, Tucker sets out to quash two myths that have fueled Civil War debate for 150 years. The first of these is that Pickett's Charge was an ill-considered roll of the dice by general Robert E. Lee, culminating in the needless slaughter of thousands. Only 5,000 of the 12,500 men who charged survived.

The second myth is that Pickett's Charge, like the broader Confederate war effort, was Anglo-Saxon in its leadership and execution. For the next century, this was to be a pillar of Southern white protestant identity, the narrative of "the Lost Cause."

Throughout his book, Tucker introduces us to the Irish-born and the sons of the Irish-born fighting in the Confederate ranks. While we're familiar with the "Scots-Irish" who had made their home in the Southern States over the prior century, Tucker estimates that 40,000 Irish immigrants, Protestant and Catholic alike, fought for the Confederacy.

Many of the Irish, such as the St. Louis regiments, were fighting not for slavery but for their right to their own religion after their churches were attacked by Know-Nothing elements in the Union ranks and their priests banished.

The Irish, both the immigrants and their descendants, were the largest ethnic grouping within Lee's army at Gettysburg, with every Southern State represented by Irish units such as the Emerald Guards, Emmet Guards, and O'Connell Guards, all of whom lined up to charge the Union lines along Cemetery Ridge on the morning of July 3.

A seam that runs through Tucker's book is the extraordinary odyssey of the Mitchel family. The book briefly recaps Irish rebel John Mitchel's transportation to Australia, his escape and American re-birth. Mitchel, who was viscerally pro-slavery, eventually settled in Richmond. Three of his sons fought for the South. The death of 17-year-old Willie, Mitchel's youngest son who was color-bearer for the 1st Virginia, during Pickett's Charge is vividly described by Tucker.

Tucker also portrays many of the Irish men and Irish units in the Union Army at Gettysburg, most notably the 69th Pennsylvania, a Philadelphia regiment, which had already survived a brutal Confederate assault on July 2. The stakes got higher the next day. As fate would have it, the 69th, led by Derry-born Colonel Dennis O'Kane, was ordered to defend critical terrain on Cemetery Ridge – known ever since to Gettysburg history buffs as the "copse of trees" and the adjoining "Angle."  It was to be the fulcrum of the battle.

Lee had estimated that a focused attack on this point in the Union line would give the Confederate attackers an 8:1 numerical advantage. After surviving the most ferocious artillery barrage of the war, these Philadelphia Irish-born soldiers, defending their own Pennsylvania soil, were to engage in vicious hand-to-hand combat, eventually stopping and turning the Confederates at the point of their greatest advance up Cemetery Hill.

They stood alone. The 59th regiment from New York broke and ran while the 71st Pennsylvania did as well. The Irish stayed, as noted by one writer, “The Irishmen of the 69th Pennsylvania resisted fiercely in a melee of rifle fire, bayonets, and fists. The Irish held."

Their place of victory has been referred to ever since by historians as the "High-Water mark of the Confederacy."  Victory came at a price – over the course of July 2 and 3, the 69th had lost its commander, almost all of its officers, and 143 out of 258 men.

Over the days of savage fighting that saw 51,000 casualties, America's deadliest battle had several what-might-have-been moments, but Lee's final gambit, Pickett's Charge, has taken on a mythical quality of its own. Scholars have argued for 150 years about what would have happened next if Pickett's Charge had broken through and Lee had won at Gettysburg.

He would then have had a relatively unobstructed run towards the 69th's home town of Philadelphia, just 120 miles to the East. He could also have wheeled towards Washington, just 80 miles to the south.

More broadly, it would emerge subsequently that the British government had been close to formally recognizing the Confederacy on the eve of Gettysburg, and decided against this upon learning of the outcome. A Gettysburg defeat would have made it practically impossible for Lincoln to withstand the mounting pressure to engage in peace talks with the Confederacy, thus cementing secession. This would also have severely damaged his chances of being re-elected in 1864.

The battle between Irish units on Cemetery Hill may be one of the strangest chapters of the Irish story in America. Irish immigrants advancing through brutal shelling and chaos, and then seeing, through the smoke, green unit flags virtually identical to their own, carried by men shouting eerily familiar phrases. “Fág an bealach (Clear the way)" resounded on both sides. The role of the Irish on both sides has now been acknowledged, Tucker has restored a vital part of our history in America. As for America, the new nation “conceived in liberty” and consecrated on the bloody field of Gettysburg would stand forever.

* Adrian Jones, a native of Roscommon, lives in New Jersey. He served in the Irish Army from 1981-89.