During one of the most defining moments in American history, the Irish showed extreme bravery. 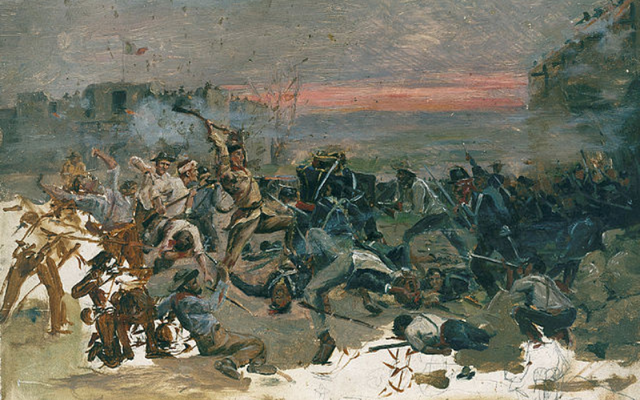 Robert Onderdonk's sketch of the "Fall of The Alamo": During one of the most defining moments in Irish history, the Irish showed extreme bravery. Wikimedia

One of America’s most iconic stories, the struggle for the Alamo, has evolved over time to become one of the most defining moments in American history.

Consequently, the fact that the largest percentage of the doomed Alamo garrison consisted of Irishmen (either born on the Emerald Isle, or the sons and grandsons of Irish immigrant-both Protestant and Catholic) has seemed entirely incongruous with what generations of Americans have been told about the Alamo.

When you visit The Alamo the Irish tricolor is one of the seven international flags to acknowledge those from other countries who fought at the historic battle.

Despite the widespread scholarship devoted to the Texas Revolution, and especially the Alamo, the fascinating story of the Celtic-Gaelic people (both Irish Protestants and Catholics) has been excluded from the Alamo saga. Instead, popular historians have focused primarily on the well-known leaders of the 1835-1836 conflict between the Texian (Texas) colonists and Mexico and outdated, traditional views.

Unfortunately, the views from below – those of the ordinary people, and none in Texas were more common than those men and women from Ireland – have remained largely absent from the Alamo’s dramatic story.

Many notable Sons of Erin were the forgotten players of the Alamo and the Texas Revolution, although their contributions were critically important and disproportionate to the ultimate victory.

Partly because of the enduring stereotype that the Irish immigrants who migrated to America remained ensconced in ethnic ghettos in the large northeastern cities like New York City, Philadelphia, and Boston instead of pushing west (just like the American people in general) has resulted in the misconception that these Celtic-Gaelic people were not leading players in the Texas Revolution.

Some of the Irishmen who fought during the Texas Revolution, including more than a dozen Ireland-born soldiers who died at the Alamo, still wore revered silver medallions of St. Patrick around their necks, spoke Gaelic, and still longed for the sight of their beautiful Green Isle homeland so far away.

Even on the southwestern Texas frontier, these resilient Celtic-Gaelic people, the western world’s longtime underdogs because of centuries of English imperialism and military power, still possessed the vivid memories of the past revolutionary struggles of their rebellious forefathers on the Emerald Isle.

Therefore, when the Celtic-Gaelic people faced the Republic of Mexico’s soldados (soldiers) on battlefields across Texas in 1835-1836, hundreds of Emerald Isle volunteers still carried distinctive Irish folkways, egalitarian ways-of-thinking, value systems, and Celtic-Gaelic cultural legacies with them into battle.

Most of all, these Sons of Erin possessed an almost instinctive desire to free themselves of the arbitrary rule of a distant centralized government, remaining as militant and defiant on Texas soil as on Ireland’s “Old Sod.” A seamless and smooth transition of revolutionary sentiments, republican proclivities, egalitarian aspirations, and nationalistic aspirations deeply rooted in the Irish experience that were transferred from the Atlantic’s east side to the southwest frontier of Texas.

Today, the Alamo’s legacy has remained alive and well in Ireland, where a close identification has long existed with the independence struggles of people around the world, including Texas.

During the early spring of 2004, an Irish nationalist site was about to be torn down by a demolition crew for progressive urban development. This ramshackle house was located at Number 16, Moore Street, Dublin, Ireland. Here, in the historic heart of old Dublin, beside the Liffey River, courageous nationalistic leaders of the Irish Republican Brotherhood saw their most idealistic dreams of an independent Republic of Ireland succumb to a tragic death in the doomed 1916 Easter Uprising, after bitter street fighting in Dublin.

Outgunned and outnumbered in a no-win situation, the surrounded Irish revolutionaries surrendered unconditionally to end the Easter Uprising. This bloody closing curtain of still another failed nationalist Irish revolt against British rule was fought around this nondescript Moore Street house during a final heroic drama, which thereafter became known as “Ireland’s Alamo” to the Irish people.

In a distinct historical parallel that was played out on Dublin’s streets, around 4,700 miles distant from the central plains of Texas and the little town of San Antonio de Bexar, the Alamo’s story has long struck a resonant chord with Ireland’s history-minded and liberty-loving citizens.

Consequently, the Irish have long identified with the Alamo’s heroic and defiant symbolism that represented a spirited defense of cherished republican principles and a tenacious last stand against the odds by homespun citizen-soldiers, who fought against the dictatorial rule of a powerful, centralized government.

Most importantly, this small Dublin house, which symbolized the heroic last stand of Ireland’s 1916 nationalists of the Easter Uprising, has been long revered as “Ireland’s Alamo.” While the Alamo has become an iconic symbol of liberty to freedom-loving people around the world, few Americans today have heard of the equally dramatic story of “Ireland’s Alamo,” which was located in an urban setting like today’s Alamo in San Antonio’s congested center.

Significantly, Ireland was disproportionately represented in the bloody struggle at El Alamo. And if the large number of Scotch-Irish and the descendants of those hardy Protestant immigrants, who had migrated much earlier to America from northern Ireland, were counted among the defenders, then no group of men more thoroughly dominated the Alamo garrison’s ranks–and the Texas Revolutionary Army’s citizen-soldiers from 1835 to 1836 for that matter--than those citizen-soldiers of Irish and Scotch-Irish descent.

What has been even more ignored by Texas historians has been the disproportionate role played by the Irish and Scotch-Irish, including recent Green Isle immigrants, in regard to leading the way in declaring Texas independence at an early date. However, such a significant contribution to the Texas creation story should not be surprising because the Irish represented the largest white ethnic group in Texas by the time of the Texas Revolution. And likewise, no single episode of the entire Texas Revolution has been presented more devoid of its distinctive Celtic-Gaelic aspects, character, and Irishness than the Alamo’s story.

For generations, consequently, traditionalists have mistakenly viewed the Texas Revolution, including the Alamo’s dramatic story, as primarily an Anglo-Saxon (Protestant) struggle against Catholic Mexico in a much celebrated, but largely mythical, “Texian Iliad” (which was a distinctly Anglo-Saxon Iliad according to traditional Texas lore) without significant Irish, especially Catholic, antecedents, influences, and contributions: partly a legacy of the longtime prevalence of anti-Irish, anti-immigrant, and anti-Catholic sentiment that has so often dominated the story of America and Texas.

In a rather ironic distortion of the historical record, the overall importance of the Irish role throughout the Texas Revolution also has been overlooked in part because of the sheer dominance of the mythical Alamo, which has grown to legendary proportions, thanks in part to generations of myth-making Hollywood scriptwriters and uncritical historians: developments that have come at the expense of significant Irish sacrifices and achievements. Casting a giant shadow that has evolved into the realm of romance, the Alamo’s powerful appeal has obscured a good many of the Texas Revolution’s hidden truths and complexities, especially in regard to ethnicity.

In a distortion of the historical record, historians have long traditionally portrayed the Alamo defenders during the 13-day siege as almost exclusively as Anglo-Saxon as freedom fighters of the Protestant faith. In this way, the men of the Alamo have been ethnically sanitized by presenting them as almost exactly like New England’s yeoman farmers (almost wholly of English, or Anglo-Saxon, descent), who first stood defiantly against British regulars at Lexington and Concord, Massachusetts, in April 1775 to spark a people’s revolution: a popular stereotype and enduring romantic image in the American memory that early resulted in the Americanization of the true historical record at the expense of ethnicity. In truth, the Alamo garrison was more multi-ethnic than has been generally realized.

Of course, the emotionally-charged factor of religion also played a large role in explaining why the Irish Catholics became the most forgotten players of the Alamo and the Texas Revolution. From the beginning and to this day, the Texas Revolution has been long interpreted by traditional historians primarily from the narrow Anglo-Saxon and Protestant perspective that excluded the vital contributions of the Irish Catholics, thanks largely to religious and anti-Irish prejudice. Consequently, the many Irish Catholics who fought with distinction for Texas independence suffered the same general obscurity in the historical record as those equally courageous Tejanos (Texas-born Catholics of Mexican descent), who served faithfully in the struggle for Texas liberty, including in the Alamo’s defense. Clearly, the true story of what happened and exactly why during the Texas Revolution, including at the Alamo, cannot be completely understood or fully appreciated without first exploring the long-forgotten influential traditions, legacies, and complexities of the Irish experience (especially revolutionary) on both sides of the Atlantic.

Distinguished by a legendary persistence to resist the dictates of arbitrary authority at seemingly every opportunity and a spirited defiance in the face of so many cruel twists of fate, the Irish proved to be a most exceptional and remarkable people throughout the course of history, and especially in the annals of the Texas Revolution.

Against the odds as historic underdogs, the Irish people were most of all survivors, including in Texas. The story of the courageous Irish who fought in the Texas Revolution was a remarkable Irish saga, because no participants in the struggle came farther or overcame greater odds than the Celtic-Gaelic soldiers, who fought and died at the Alamo and in the struggle against Mexico from 1835 to 1836. These brave Irish patriots won distinction as a diehard, moral soldiery, who were still devoted as much to St. Patrick as the adopted homeland that they loved, and were truly part of a distinguished Irish Odyssey on Texas soil.

* Excerpted from “The Alamo's Forgotten Defenders: The Remarkable Story of the Irish During the Texas Revolution."