Top Irish expressions an American picked up living there

Top ten list of words I can’t shake as an American who lived in Ireland and now has returned. 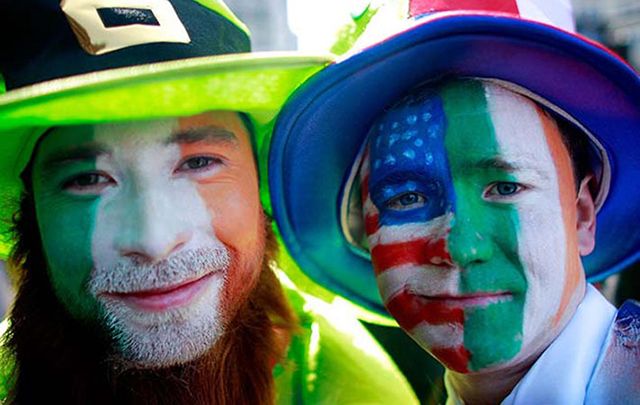 Top ten list of words I can’t shake as an American who lived in Ireland and now has returned. iStockphoto

You may note, even only by my name, I have not an ounce of Irish blood, but I did marry an Irish woman who’d been in the States much of her adult life, and we decided to move (back) to Ireland, about 7 miles outside Longford, in 2007. We lasted there a few difficult years, as the floor caved in beneath the economy and we were hard-pushed to get by. I mean, hard-pressed.

Overall, I am of the opinion that the Irish speak English with more charm than any other peoples on the planet − even, or especially, those older codgers. And even when the origin of the expression might be British (e.g. bollocks, which dates back as far as the Wycliffe Bible of 1382), the Irish have a way of making it their own.

So coming back to New York, I found there are some expressions I’d adopted that are just difficult to drop − for sometimes , as Larry Donnelly pointed out, the Irish expression just beats out the American substitute (and don’t even get me started on how much I prefer and miss their spelling). Of course, there must be a fine line drawn between the inclination to use a foreign expression versus the danger of appearing pretentious.

It isn’t easy to resist temptation, although usually, one must. Take the Irish word ye, meaning you, the second person plural. To my knowledge American northerners don’t have a word for this; in the south, there’s the concatenated equivalent y’all but that would sound foolish coming from a New Yorker, except when served with irony. The best we can do is “all of you,” which, trust me, is lame. Yet to use ye here would seem even more insane; your friends would think you’d become a Shakespearean.

Anyway here’s my list of 10 of the hardest to give back.

Maybe because I didn’t grow up with it, bollocks just sounds so much more gutsy than any American equivalents. And please note that a person can be “a bollocks,” which also sounds fabulous.

And speaking of cursing, which we must speak of, let us not overlook the curious euphemisms feck and shite, which are superior to our substitutions (although it must be said that, at least in proper company, the originals are preferred on both sides of the Atlantic, in my experience).

I’m sure I’m not the first to note that the Irish also are occasionally given to mildly blasphemous utterances of great richness, such as “For the love of God!” or “Holy Mother of Divine God!”… and in the country parts the abrupt "Bejayzus!" or any of its subtle variants.

Not only am I not Irish, I’m not Catholic, but there are times I’d love to praise the Lord in this colorful manner but must catch myself. I mean, Jesus, Mary, and Joseph, I’m not, after all, Irish.

And who could possibly come up with a superior description of getting angry and letting ‘em have it than “giving out”? Seriously.

In fact, there’s many would tell you it’s only the best way of making sure he doesn’t think you let him away with it and you know it’s only worse he’s gettin’!

Mr. Donnelly implies that the Irish are appalled by awesome. Unfortunately, that was not my impression. I think it’s creeping in, especially with the young, which is too bad.

Brilliant even sounds brilliant, it is much more brilliant than awesome, although brill is not. And in all fairness (oops), there’s really no reason an American can’t say brilliant. Feel free to use it just after finishing this article, in fact.

Now you must admit there can be a bit of a strain of melancholy in the Irish temperament, which may explain why the word “dead” seems to carry such a heavy burden. You’re “dead on,” “dead right,” “dead gorgeous”, dead dead dead. And if fact I like it, it does add a certain (dead) weight to the matter at hand.

Not exactly sure why, but this might be my favo(u)rite. Now I don’t know if it has its origins in the pejorative word for the travelers − there is that similarity − but moving right along let’s just say that saying you’re “completely exhausted” just can’t hold a candle to “Man, I’m knackered.” It’s the kind of statement that can only be answered with, “Will you just go to bed then?”

I’m only after compiling this list and a comet fell in the yard. So now your man is comin’ to dig it up Tuesday week. (Okay, I just had to get those ones in there too.)

Perhaps a bit redundant, but then “watch your head” is only surrealistically possible.

Lastly, there is this somewhat frayed saying that truly expresses the Irish soul, in my presumptuous estimation. I suppose it’s been common parlance even in the States for a while, but I first encountered it among the Irish, and there is an Irish translation (tá sé mar atá sé), so I think the Irish can claim it in all its unarguable clarity regarding the current state of things.

So at the end of the day, it can’t be helped, language changes, language extends and cross-pollinates, mainly through pretentious eejits carrying weird-sounding words across oceans and then it becomes something different, and then well what can you say but it is what it is, in all honesty?

* Ivan Nahem is a writer and yoga teacher; he lives in Woodside, Queens.