President Joe Biden was only delighted during a bagpipe performance of "The Minstrel Boy" at the White House on St. Patrick's Day. 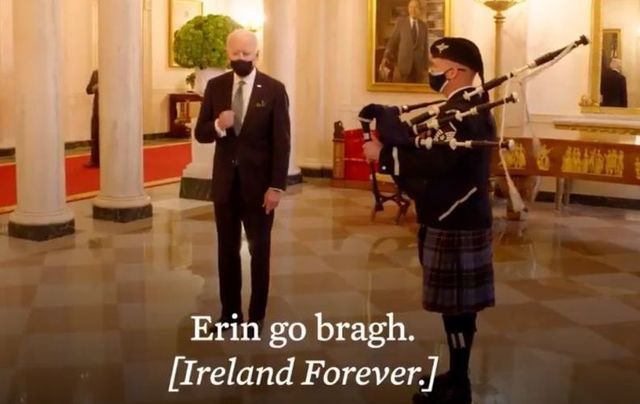 President Joe Biden was treated to a performance of "The Minstrel Boy" on the bagpipes at the White House on St. Patrick's Day 2021. @POTUS. Twitter

A bagpiper stunned President Joe Biden with a special performance of a popular traditional Irish song at the White House on St. Patrick's Day.

In a video posted to Twitter on Sunday, Biden stopped in his tracks to enjoy a rendition of the "Minstrel Boy" performed by a bagpiper while walking through the White House.

The President was clearly touched by the nod to his Irish roots on Ireland's national holiday and gave the piper a warm round of applause.

"Thank you. My mother thanks you. Jean Finnegan thanks you," Biden told the piper.

"God love you man. You play incredibly well. Thank you, what a nice thing to do."

The President and the piper wished each other a "happy St. Patrick's Day", while Biden proudly said "Erin go Bragh" [Ireland forever] while the pair posed for photographs.

They really know how to make an Irishman feel special at the White House. pic.twitter.com/NDSGJt5fI1

The bagpipe performance of "The Minstrel Boy" was just a small part of the greening of the White House on March 17, the first time that proud Irish American Biden celebrated St. Patrick's Day as the President of the United States.

Biden, who celebrates ancestral links to Ireland through 10 of his 16 great-great-grandparents in County Louth and County Mayo, frequently refers to himself as Irish and did so again in the caption that accompanied the short video on Twitter.

"They really know how to make an Irishman feel special at the White House," Biden said on Twitter on Sunday.

"The Minstrel Boy", meanwhile, is one of the most popular traditional Irish songs in Irish-America.

The patriotic song was written by Thomas Moore at the beginning of the 19th century and became popular among Irish soldiers who fought in the American Civil War. The song is also a mainstay for organizations with a strong Irish-American representation, including fire and police departments in New York, Boston, and Chicago.