Of Ulster protestant decent, this media mogul was the inspiration for Orson Welles's 1941 film Citizen Kane. 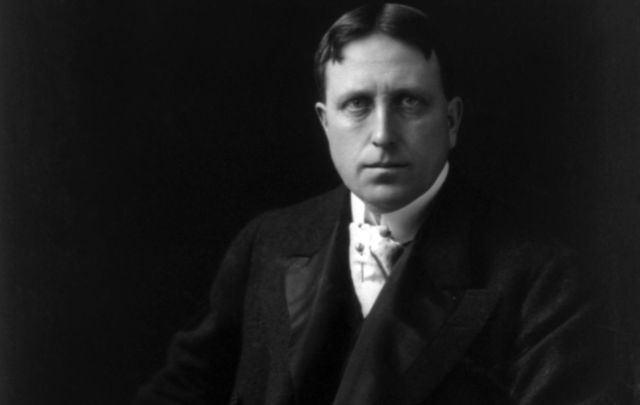 William Randolph Hearst is best remembered as one of America’s richest businessmen, a media mogul, and the main inspiration for Charles Foster Kane, the lead character in Orson Welles's 1941 film Citizen Kane.

However, like many rich and powerful men he believed he should be president and he also had a controversial political life.

William Randolph Hearst was born in San Francisco on the 29th of April 1863. He was the only child of George Hearst and his much younger wife Phoebe Apperson Hearst.

George Hearst was a mining engineer who had made millions in the late 1870s from the Homestake gold mine in the Black Hills of South Dakota. He would later go on to become a Democratic US Senator for California from 1887 until his death in 1891.

His mother Phoebe Elizabeth Apperson Hearst was a prominent feminist and campaigner for a women’s right to vote.

The Hearst’s were of Ulster protestant decent. Williams' paternal great-grandfather John Hearst had left Ballybay, County Monaghan, with his wife and six children, in 1766.

William Hearst enjoyed a privileged upbringing spoiled by his adoring mother and elderly father. He enrolled in Harvard in 1885 but was soon expelled for his outrageous antics, which included sponsoring wild beer parties.

His father decided to try and help mature his son by giving him control of the San Francisco Examiner newspaper, which George Hearst had recently acquired as repayment for a gambling debt.

William had found his calling and used his wealth to attract some of the best writers of the day to his new projects, such as Mark Twain and Jack London.  In just a few years the Examiner dominated the San Francisco market.

Buying more newspapers, Hearst created an empire that at its peak numbered nearly 30 titles in major American cities. He later expanded to magazines, creating the largest newspaper and magazine business in the world.

Hearst controlled the editorial positions and coverage of political news in all his papers and magazines and often published his personal views.

He famously sensationalized Spanish atrocities in Cuba, while calling for war against Spain, in 1898.  An event that was recreated in a memorable scene from Citizen Kane.

In 1900, William Randolph Hearst followed his father's example and entered politics, he began his quest for the U.S. presidency, eventually spending $2 million in the process.

With the support of the corrupt Tammany Hall Democratic party operation in New York, Hearst was elected to Congress from New York in 1902 and 1904. However, running his ever-expanding media empire gave him little time to be in Washington.

Hearst attempted to secure the 1904 Democratic nomination for President but lost out to Alton B Parker.

Hearst’s political failures despite his vast wealth and influence earned him the nickname ‘Also-Randolph' Hearst.

A committed opponent of the British Empire, Hearst, and his media empire opposed American involvement in World War I. Hearst's last bid for office came in 1922, when he ran for the U.S. Senate nomination in New York, only to be vetoed by Al Smith the New York Governor.

By the mid-1920s, one in every four Americans read a Hearst owned newspaper.   He also ventured into motion pictures with a newsreel and a film company. He and his empire were at their zenith.

The 1929 stock market crash and subsequent economic depression hit his media empire hard, especially the newspapers, many of whom were unprofitable. Hearst had to shut down the film company and several of his publications.

During this time, his editorials became more isolationist and nationalistic. He turned against President Roosevelt, while most of his readership supported FDR. Hearst’s reputation was tarnished when, in 1934, he visited Berlin and interviewed Adolph Hitler, helping to legitimize the Nazi regime in Germany.

By 1937, he faced a court-ordered reorganization, and Hearst reluctantly sold many of his antiques and vast art collection to pay creditors.

Hearst was not pleased. He used his resources to prevent the release of the film and even offered to pay for the destruction of all the prints. Welles refused. William Randolph Hearst spent his remaining 10 years with declining influence on his media empire and the public. He died on August 14, 1951, in Beverly Hills, California, at the age of 88.