At the end of the 17th century, the Dublin City Assembly decided to build a workhouse on James’s Street, outside the city’s western gate where destitute beggars from the west of Ireland entered the city. 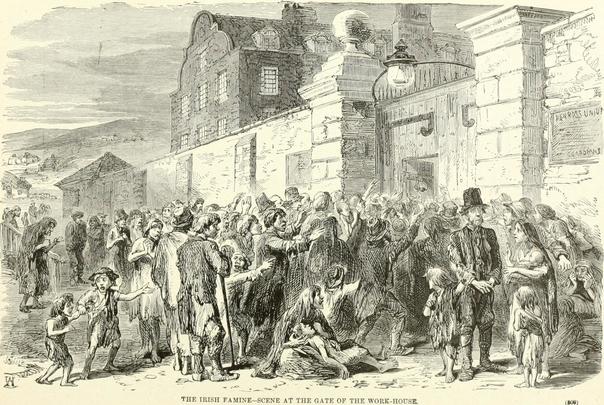 People outside a workhouse during the Great Famine. John Clark Ridpath

The first inmates were admitted in January 1706. So began the story of St James’s, now one of the leading European hospitals. Davis Coakley and Mary Coakley tell the story.

Following the establishment of the new City Workhouse at the beginning of the 18th century, another major social issue caused public outcry; the abandonment of infants at the doors of wealthy citizens, in churches, and on the banks of the canal. The legislation was enacted in 1730 obliging the governors of the new workhouse to admit all abandoned children. The name of the institution was changed to the Foundling Hospital and Workhouse of the City of Dublin.

A revolving basket was placed at the entrance so that infants could be left anonymously. Infants came from all over Ireland, and many of them died en route or were moribund on arrival. Unfortunately, they did not receive the necessary standard of care and many died in appalling conditions, giving rise to inquiry after inquiry throughout the 18th century.

In 1772, the Irish parliament decided to remove beggars and vagrants to the House of Industry, which had just been opened on the north side of the city. As a result, the care of abandoned infants became the sole responsibility of the institution on James’s Street, and the name was changed to the Foundling Hospital. The hospital continued to admit children until parliament decided to stop all further admissions in 1829.

The activity of the Foundling Hospital was wound down and in 1839 the buildings were acquired by the poor law commissioners to form the workhouse of the South Dublin Union. The workhouse, which itself became known as the South Dublin Union or ‘the Union’, was one of over a hundred workhouses that were placed around Ireland after the British government decided, against strong advice to the contrary, to introduce the workhouse system in Ireland. The philosophy behind the workhouse system was to make the conditions within the workhouses so harsh that only those who were unable to get work would seek admission. However, destitution existed in Ireland not because able-bodied men and women did not want to work but because there was no work to be had.

Just a few years after the system was introduced, famine spread across the country, and workhouses provided shelter and food for the starving population. The South Dublin Union, which had a maximum capacity of around 2,000 inmates, struggled to cope with over 3,000 at the height of the Great Famine. This overcrowding led to the transmission of infectious diseases throughout the institution and to the death of many inmates. Towards the end of the Famine, when the people had little resistance to infection, a cholera epidemic spread throughout the city. Fever sheds were placed at the Rialto end of the South Dublin Union in an attempt to deal with the crisis. The victims were treated and nursed by individuals who placed their own lives at risk. Within a short time, the facilities were overwhelmed and very ill patients lay on the ground outside the sheds waiting for admission. 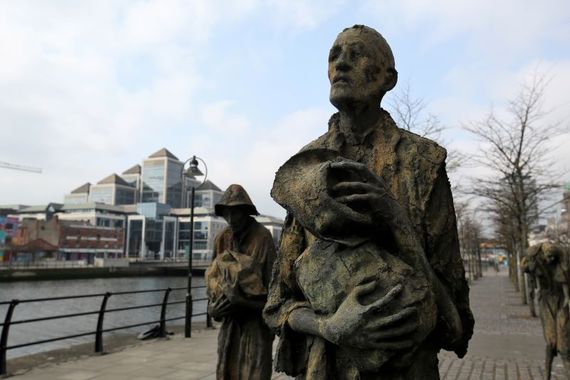 A Great Hunger memorial in Dublin.

The number of inmates in the South Dublin Union continued to rise significantly during the 1850s because of the social distress and poverty in the country following the Famine. According to the medical officers, the institution was functioning as a ‘vast hospital’. The board of guardians established a committee to make recommendations on how to deal with the overcrowding. The committee reported in 1854 and recommended a significant increase in the accommodation for inmates and also proposed the development of a general hospital in the grounds, capable of accommodating 800 patients, which would be distinct from the other buildings. Although the latter recommendation was not implemented at the time, it was the first proposal to build a general hospital on the grounds of the South Dublin Union Workhouse.

The Mercy order of nuns

The original function of the infirmary of the South Dublin Union was to treat sick inmates, but in the latter half of the 19th century, it also began to admit sick poor patients specifically for treatment. During the same period, there were complaints about the general standard of care within the Union. Aware of these complaints, the board of guardians responded by inviting the Mercy order of nuns to take over both the care and management of some of the wards. The order accepted the challenge, and ten nuns began working in the Union in 1881. At around the same time, two Protestant deaconesses, who were trained nurses, were appointed to work in the Protestant wards. The South Dublin Union was run along strictly sectarian lines and was divided into Catholic and Protestant sections. It was also divided into hospital and welfare areas, and men and women were housed in separate accommodation.

In the opening years of the 20th century, there were around 1,200 medical patients in the wards and two medical residents delivered the day-to-day care. Tuberculosis was a major cause of death in young people at this time. The voluntary hospitals were reluctant to admit patients with advanced tuberculosis as there was no treatment and they ‘blocked’ beds. As a consequence, many of these patients had no option but to seek refuge in the Union. The care of patients with tuberculosis became a major undertaking for the South Dublin Union, and there were several male and female wards for patients with the condition.

At this time the South Dublin Union had the appearance of a medieval town surrounded by high walls. The original buildings of the City Workhouse and of the Foundling Hospital were still standing, together with a number of tall grey buildings that were erected during the nineteenth century. Intersecting lanes and alleys connected these buildings and the atmosphere was unhurried. Many of the more senior staff lived in houses on the grounds with their families.

This scene was shattered by the Easter Rising, which began on Easter Monday 1916. The South Dublin Union was occupied by the 4th Battalion of the Irish Volunteers, under the command of Éamonn Ceannt. Within hours of the beginning of the rebellion, the Union was surrounded by troops from the Royal Irish Regiment. Intense fighting ensued throughout the week as the soldiers attempted to gain access to the grounds. They eventually succeeded and began to move through the institution attacking buildings occupied by Volunteers. A nurse named Margaret Kehoe was mortally wounded in one of the hospitals. Eventually, the Volunteers were surrounded in the night nurses’ home, which they were using as their headquarters. They managed to hold out until the general surrender at the end of Easter Week. 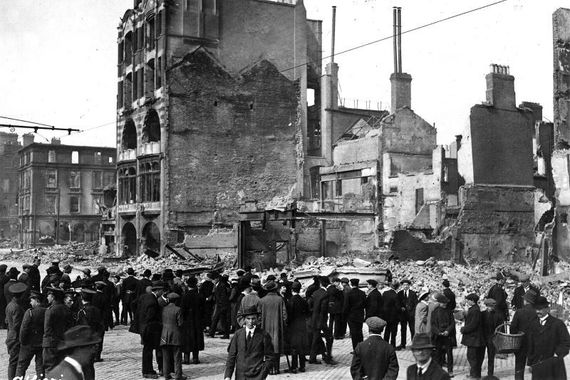 The destruction of the 1916 Easter Rising on Sackville Place, modern-day O'Connell Street.

Staff remained in the Union throughout the conflict to care for the inmates. The bakery continued to function, and food was distributed to the different hospitals by staff carrying a white flag. Arrangements were also made to feed the residents of the local community, who were cut off by the fighting.

Two years after the Easter Rising, the South Dublin Union faced another crisis, one of the far more deadly proportions, as the great influenza pandemic of 1918–19 swept through Dublin. The influenza was very virulent, and young adults were particularly vulnerable. People living in large institutions were greatly at risk of infection and this was borne out in the Union. In this period, under normal circumstances, the number of deaths in the South Dublin Union ranged from fifteen to twenty each week, but at the peak of the epidemic this rose to around fifty, and many of these were young adults. The inmates were terrified, yet a number of them volunteered to help care for the sick. Their contribution was very valuable as, at any one time, more than half the staff of the workhouse had influenza and was absent on sick leave.

There was an aspiration to develop St Kevin’s Institution into a large municipal hospital that would serve the sick poor of the city. The Department of Local Government, which held the health portfolio at the time, was fully supportive, but the onset of the Second World War delayed progress. In 1952, work began with the purpose of changing St Kevin’s Institution into an acute general hospital. This involved the demolition of some of the old Workhouse and Foundling Hospital buildings and the extensive refurbishment of others. The hospital became known as St Kevin’s Hospital. The clinical services were delivered by a small but dedicated group of consultants who provided a high standard of medical care. 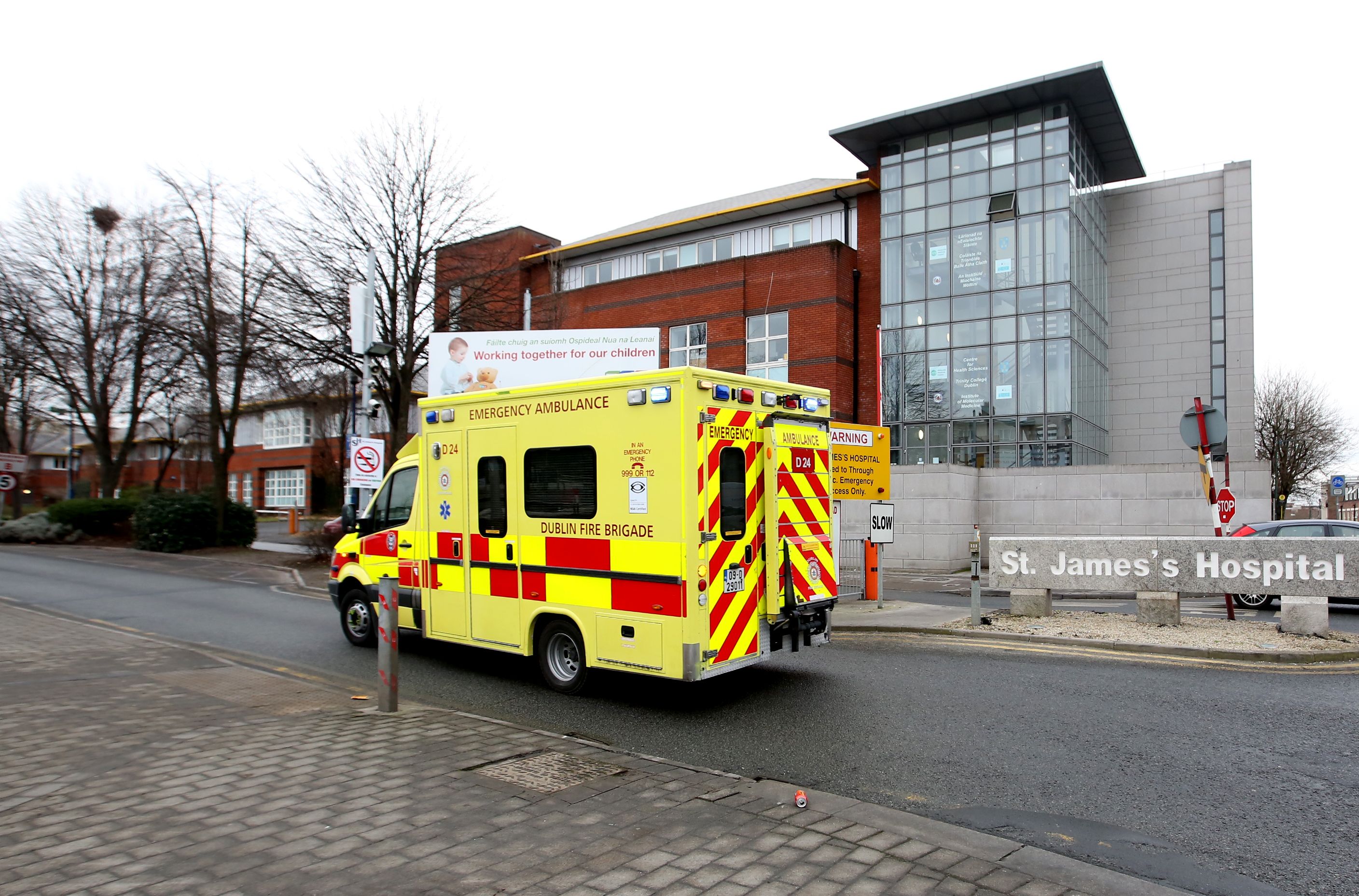 Throughout the 20th century, a number of attempts were made to amalgamate the small voluntary hospitals, which were traditionally linked to the medical school of Trinity College Dublin, to form one large hospital. Eventually, the board of Trinity College placed the development of the medical school and its integration with a teaching hospital high on its list of priorities and became a powerful player in the development the modern-day St James’s Hospital.

There have been remarkable developments in St James’s Hospital over the last twenty years. These include the construction of clinical and research institutes and centers of excellence that have placed St James’s among the leading European hospitals of the twenty-first century. The range and expertise of the specialties within the hospital were major factors in the choice of St James’s Hospital as the site for the new national children’s hospital, which is currently under construction, and for the planned relocation of the Coombe Women and Infants University Hospital.