Historic disasters and warning signs - World was unprepared for COVID-19

Vesuvius eruption in AD 79, the Irish Famine, the Spanish Flu - well we ever learn to look at the signs and learn. 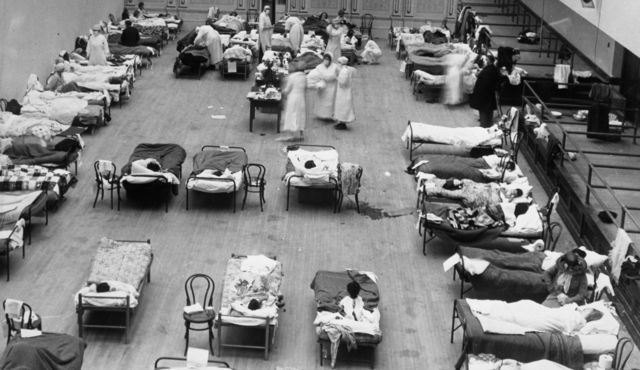 The Spanish Flu, 1918: A makeshift hospital in Oakland during the flu pandemic. Oakland Public Library.

The COVID-19 pandemic is with us now but how was it that the world was unprepared, why were the warning signs not acted upon.

In AD 79 the fashionable Roman town of Pompeii in the Bay of Naples was at the zenith of its power and was one of the poshest resorts in the great empire.

It was a playground for the rich, though 80 percent of the population existed just to serve their masters either as slaves or free workers.

The mad Emperor Caligula was said to own a plush villa along the Mediterranean coast near the town.  One of the finest houses was owned by former Emperor Nero’s wife Poppaea. It was the Hamptons, Roman-style, and the very rich indulged.

Sure, there was one problem, the threat of a lava explosion from nearby Mount Vesuvius, but it had been so long since the last one that people had simply forgotten.  Indeed, Vesuvius was known as a wonderful place to harvest wine grapes as the ashy soil made for excellent flavor.

Read more: A chat with Chuck Feeney the real antidote to Donald Trump

There was extraordinary wealth among the Roman upper class at the time.  There was even heated water, magnificent bathhouses, working sewers, a super-efficient road layout, abundant labor and you could own as many slaves as you could afford. The population was 20,000.

Signs reading “Cave Canem” or Beware the Dog were common outside villas.  Clearly there was a lot to protect.

Yet, suddenly it all came crashing down. Best estimates are it was around October 17 AD 70 when the first eruption happened.

Some fled but most stayed. Vesuvius was seen as a benign entity, a sacred mountain, not one that threatened citizens. Then on the third day or so the massive eruption happened.

Until then the only clash with the true power of nature had been a severe earthquake 10 years earlier, but all that damage had been repaired.

After two awful days of momentous destruction Pompeii was buried under 20 feet of ash and would remain undisturbed until 1748.  Most of the 20,000 citizens perished, many frozen in the dust forever by the lava that preserved their bodies at the moment of death.

"Darkness fell, not the dark of a moonless or cloudy night, but as if the lamp had been put out in a dark room," wrote historian Pliny the Younger, who witnessed the cataclysm from across the Bay of Naples.

Pompeians perished because like us and the coronavirus pandemic, they ignored a blindingly obvious fact -- natural catastrophes happen throughout history and we should always be prepared to expect them. No early warning system to evacuate existed in Pompeii.

Consider the Irish Famine, another natural catastrophe.  It was caused by Phytophthora infestans, a microorganism fungus that appeared almost overnight and destroyed Ireland within two years. Again no one had foreseen the tremendous risk of depending on the potato plant as the sole means of sustenance.

Now comes coronavirus. Fair to say we had more than enough warning of it after SARS and bird flu, both of which almost became pandemics in the recent past.  The 1918 Spanish flu was a clear historical marker showing a worldwide flu was possible.

Earlier this year as the world slept the coronavirus took hold in China, likely through bat/human interaction. The results, like in Pompeii and Ireland, have been catastrophic and have shaken the very world to its roots.

Everybody was asleep at the wheel -- the World Health Organization, the Centers for Disease Control in the U.S., Chinese authorities who hid the spread of the flu for critical weeks, etc.

When will we ever learn?