Rory McIlroy said on the McKellar Golf Podcast this week that he likely wouldn't play golf again with President Trump, whose management of the coronavirus crisis in the US the golfer criticized. 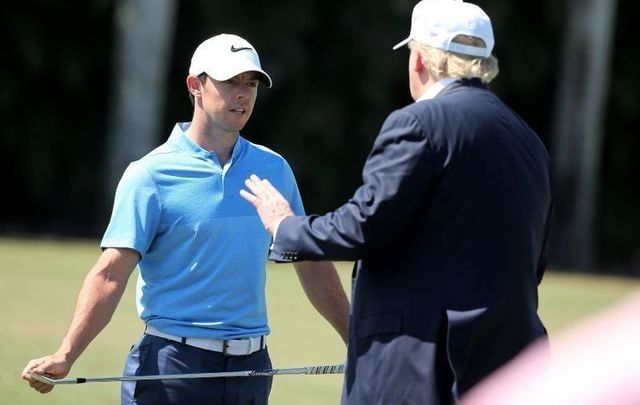 Rory McIlroy has lashed out at President Trump saying that he doesn’t agree with Trump’s management of the coronavirus crisis in the US.

Rory McIlroy said he wouldn’t play another round of golf with President Donald Trump after receiving backlash for it back in 2017. The pro-golfer also said he doesn’t agree with the President’s management of the coronavirus crisis in the US.

“We’re in the midst of something that’s pretty serious right now and the fact that he’s trying to politicize it and make it a campaign rally and said that we administered the most tests in the world like it’s a contest.

“There’s some stuff that’s just terrible and it’s not the way a leader should act, and there is a bit of diplomacy that you need to show and I just don’t think that he’s shown that, especially in these times.

McIlroy, a native of County Down who now lives in Florida, was speaking on the McKellar Golf Podcast on Thursday with the show’s host Lawrence Donegan.

During the duo’s nearly 90-minute conversation, McIlroy said: “There’s some things that go on outside of golf which I have opinions on. My beliefs are different than someone else’s beliefs and that’s fine, that’s the world, if we were all the same, we’d all be pretty boring.”

In 2017, McIlroy accepted an invitation to golf with President Donald Trump, a decision he received a considerable amount for backlash for afterward. Now, McIlroy says: “I’ll sit here and say the day that I did spend with him [Trump] and others was very enjoyable.

“He’s very charismatic, he was nice to everyone, it didn’t matter if whether you were me, or the guys in the cart barn, or the pro at the golf club.

“Whatever it is, it’s an X-Factor, it’s a charisma, I don’t know, whatever you want to call it. Most people that he came across that day he was cordial, he was nice, he was personable, and that’s my only real interaction with him.

“I will sit here and say the day I had with him I enjoyed. But, that doesn’t mean I agree with everything, or, in fact, anything that he says.

“It’s life, and it is what it is, and that’s a very mundane thing to say,” McIlroy said, adding, “Look, I enjoyed my time with him when I did spend time with him on the golf course, but it doesn’t mean that I agree with the majority of the stuff that he says.”

When Donegan asked McIlroy if he would accept another invitation to golf with Trump, McIlroy hesitated for a moment before answering: “I don’t know if he’d want to play with me again after what I just said,” he said with a laugh.

“I don’t know. It’s very self-serving of me to say ‘no,’ because if I don’t then it means that I’m not putting myself int he position to come under scrutiny and I’m avoiding that.

“But I probably wouldn’t, no.”

You can listen to the May 14 episode of The McKellar Golf Podcast here:

In 2017, McIlroy faced criticism after accepting an invitation to play golf with President Trump. He told USA Today afterward: “I've spent time in President Trump's company before, and that does not mean that I agree with everything that he says. Actually the opposite."

“But whenever an invitation or a request comes my way, I don't want to say I jump at the chance, but at the same time, you know, to see the Secret Service, to see the scene, I mean, that's really what I was going for. I mean, there was not one bit of politics discussed in that round of golf. He was more interested talking about the grass that he just put on the greens.

“But, yeah, look, it's a difficult one. I felt I would have been making more of a statement if I had turned it down. It's not a tough place to be put in, but it was a round of golf and nothing more.”

On Twitter, he responded to the 2017 backlash by saying: “This wasn't an endorsement nor a political statement of any kind. It was, quite simply, a round of golf.”