County Down golf star said “He probably shot around 80. He’s a decent player for a guy in his 70’s!” 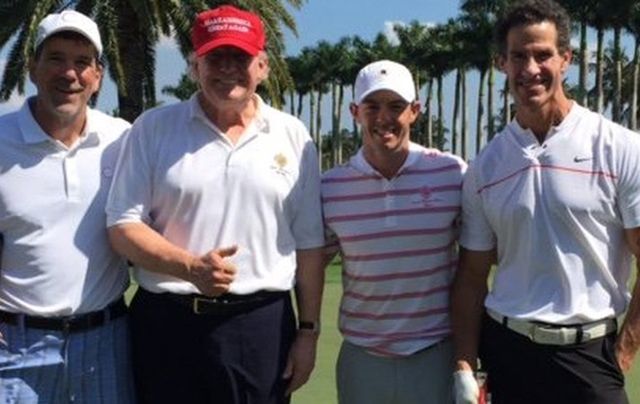 County Down’s Rory McIlroy played a round of golf with the President of the United States, Donald Trump, on Sunday, at Trump International Golf Club, in Palm Beach, FL.

A photo was posted on Twitter by Clear Sports, an outdoor and sporting goods company, showing its Chef Executive Garry Singer alongside New York Yankee player Paul O’Neil, McIroy and Trump. However, McIlroy told the website No Laying Up that Singer and O’Neil were not part of the presidential group. Their group was rounded-out by, Kildare-born, Nick Mullen from International Sport Management and Rich Levine, a friend of the President’s.

McIroy told the site “He probably shot around 80. He’s a decent player for a guy in his 70’s!”

The golfer said he received the call asking if he’d call on Saturday night, to play on Sunday morning. McIroy is currently nursing a stress fracture in his rib and was not planning to play golf for another week. However, he said he had to make an exception for the POTUS.

Currently ranked as the world’s number three golfer McIlroy has not played competitively since January, however, has confirmed that his rehabilitation has been doing well and he plans to play next week at the WGC-Mexico Championship.

McIlroy who currently lives in Florida, with his American fiancée Erica Stoll, has previously expressed his views on US politics. Ahead of the presidential election McIlory said “I’m not American.

“He's not going to be the leader of my country.”

He continued “Look, it really doesn't bother me too much. I've been following it. I really thought I knew what politics were until I started to watch some of these presidential debates…Look, I can't vote. And if I were to vote, I'm not sure I would want to vote for any of the candidates.”

This also isn’t the first time that McIlroy has voiced his opinion with regard to the POTUS’ golfer prowess. In June 2013, while attending the G8 meetings in Northern Ireland former president Barack Obama took the opportunity to play few rounds. While speaking to the press he said “I did meet Rory McIlroy last year, and Rory offered to get my swing sorted…Which was a polite way of saying, 'Mr. President, you need help.”