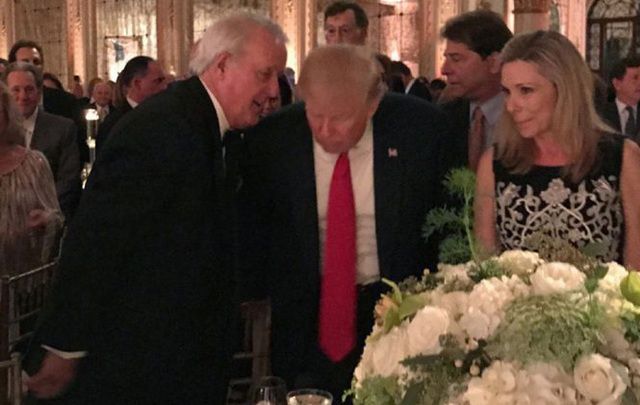 The former prime minister of Canada Brian Mulroney say the Irish American classic “When Irish Eyes are Smiling” to President Donald Trump at the Mar-a-Lago, Florida resort, on Saturday night.

A video posted on various social media platforms appears to have been taken at a fundraiser for the Dana-Farber Cancer Institute. It was headlined by the Canadian songwriter David Foster.

Mulroney, who has been a longtime neighbor of Trump’s in Palm Beach, FL, was sitting with the President and his wife, Melania, at the fundraiser. The Star also reported that Mulroney gave the President a first-hand read on the meetings with the Canadian Prime Minister Justin Trudeau, in Washington last week.

Also present was Brian Burns, named by Trump as his the future US Ambassador to Ireland.

Calling Mulroney to the stage, the headliner Foster, said “I would never presume to say that I could go to the president of the United States and ask him to sing, so I won’t do that.”

Mulroney jokingly said to the president, before starting his performance, “Mr. President, I hope this doesn’t fracture U.S.-Canada relations for decades…I apologize in advance.”

He told the crowd the previous evening he had visited with Andrea Bocelli, the opera singer at his home, and the Italian pro had said he had a good voice.

This was not the first time that Mulroney said “When Irish Eyes are Smiling” for a US President. In 1985, the Canadian and his wife, Mila, joined Ronald Regan and his wife, Nancy, in singing the song during a meeting Quebec City, dubbed the “Shamrock Summit.”

Ironically his entertaining favorite tune, “When Irish Eyes Are Smiling”, was not the work of those back on the Emerald Isle. While it’s long associated with the Irish and tends to crop up in ever Ireland-related movie, it was in fact written by a trio of writers in the United States, with strong tied to America’s Tin Pan Alley.

Read more: The history behind “When Irish Eyes are Smiling”