Why Donald Trump has a very good point about fake news

"He is his own best defender. He was funny, relaxed, informative, off the wall and stayed until there were no more questions to answer." 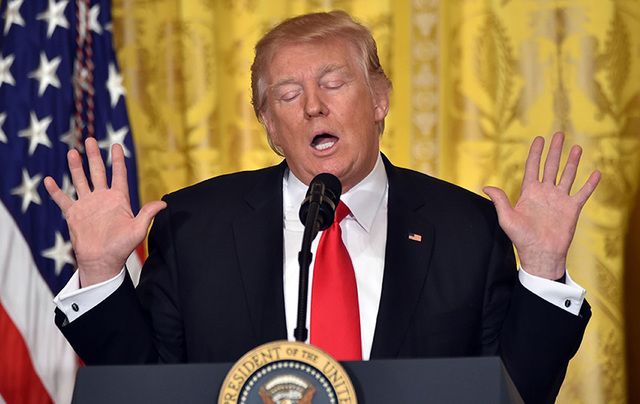 There is nothing new about fake news. Long before Donald Trump was accusing the media of fake news, there were major incidents that started three wars.

Consider fake nuclear weapons in Iraq. Several stories by ace reporter Judith Miller that ran on the front page of The New York Times seemed to prove beyond doubt that Iraq possessed weapons of mass destruction. Her informer used the code name “Curveball,” which was pretty apt given he was lying. Three trillion dollars later and countless lives lost it was a hell of a fake news coup.

In the Gulf of Tonkin incident in August 1964 three North Vietnamese patrol boats attacked an American destroyer on August 4.

Except it never happened. No matter, fake news reported it did. On August 7, 1964 Congress passed the Gulf of Tonkin resolution allowing President Johnson to bypass Congress and send ground troops into Vietnam. We all know how that turned out.

William Randolph Hearst started the Spanish-American War when the battleship Maine exploded in Havana harbor in 1898. Hearst sent America to war with inflammatory headlines and cheer-leading drowning out President McKinley, who wanted to calm the waters. It is believed now the Cuban army fighting the Spanish at the time likely detonated a charge that blew up the magazine on the ship in order to get America into the war.

So maybe the media should not be so self-righteous when it comes to sneering at Trump’s comments about fake news.

Trump put on an extraordinary performance at his press conference, proving beyond a shadow of doubt he is his own best defender.

He was funny, relaxed, informative, off the wall and stayed until there were no more questions to answer.

It made you realize that Trump is like an empty oil truck – he needs the fuel of the media to operate.

During the campaign, he was on the front line every day and gave ‘em hell. Now he is far more remote, peering out through the White House curtains at the passing parade.

He sends emissaries out, but they are losing, not winning like Trump promised.

Sean Spicer has become a figure of fun. Reince Priebus looks shattered. Bannon is such an oddball that some people seem to visibly recoil when he’s around. Stephen Miller would not be out of place as an Oliver Stone assassin character. Kellyanne Conway has lost all bearing.

So it is up to Trump to rescue Trump, and yesterday he did so.

But he can’t keep coming up to bat and swinging every inning. His followers will have loved his combativeness, his directness and above all his sometimes open contempt for the media. But it is no longer a campaign, and Trump needs an “A" team to rebuild his reputation in the White House, having lost two cabinet choices, botched an immigration order, etc.

But he has inner strength. His comments on Israel and the Palestinians at least got rid of the blatant fallacy that a two-state solution is still possible. It reminded me of the need for Irish pols to say a united Ireland is their goal when everyone knows it is at least generations away.

If Trump can forget about the size of crowds, what a CNN host is saying to him, what clothes brand his daughter is hawking etc. and lay off hard-working immigrants he can be a very meaningful president. He doesn't lack the ability to impact, as his press conference showed.

Here is the press conference in full: