These are the times that try men’s souls. America will prove bigger than the damaging Trump agenda and rise again. 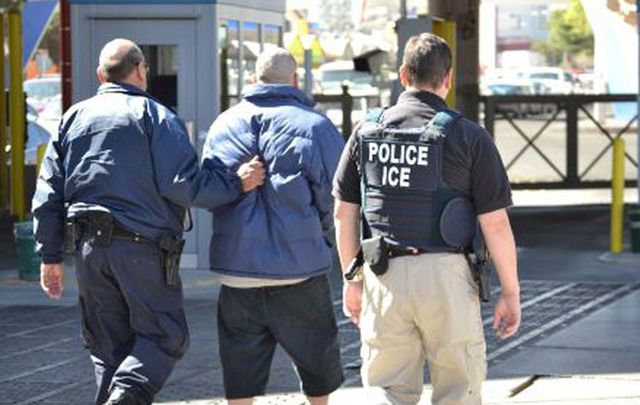 ICE arresting an alleged perpetrator: These are the times that try men’s souls. America will prove bigger than the damaging Trump agenda and rise again.

The headlines last week about numerous immigration raids across the U.S. caused panic and instability among many ethnic communities.

Yet there seems to be no clear definition if the raids were business as usual or an increased role for the Bureau of Immigration and Customs Enforcement (ICE) in deporting immigrants.

Irish organizations that deal with this issue were reporting deep unease in the community, with fears being expressed by many undocumented that they would be targeted.

There were specific rumors flying around, such as a raid on 61st Street and Roosevelt Avenue in Queens which supposedly nabbed several Irish undocumented. The very same story circulated in the Hispanic community.  Neither was true.

However, it does show a community deeply on edge thanks to the lack of insight into what exactly ICE is doing.

While President Trump has stated his priority is to deport criminal aliens, the definition of that term is crucial.

Are people with minor driving infractions considered criminals? Are those who overstay their visas also criminals? No one seems to know the answer, and like everything else with the Trump administration, no one seems to make clear what the actual policy is.

MUST-HAVE INFORMATION: What the feds can and cannot do in immigration raids https://t.co/tYYITSYOjp pic.twitter.com/8UNRimarWG

Trump did take time out last week to talk about his $25 billion proposed wall along the Mexican border, which stands as perhaps the greatest insult to our Mexican neighbors, millions of whom work in low-paying jobs in the U.S.

One almost wishes for a day when no nannies, no cooks, no farm workers, no restaurant help and no chicken pluckers show up for work.  Let us see how long the American economy can survive without the undocumented.

Those who maintain that the undocumented are taking legal jobs from Americans do not understand that Americans will not toil 10 hours a day in boiling sunshine picking fruit and vegetables for $6 an hour.

Nor do they understand that Americans will not do the jobs in meat factories where danger lurks everywhere in the process of cutting up carcasses.

That is just a glimpse of life among the undocumented. We are led to believe that these are all dangerous people.

But the greatest killers of American people are gun owners who do not know how to use their weapons. And let’s not forget the guns used by American citizens to commit mass murder in places like San Bernardino, Orlando and Newton Connecticut.  What will President Trump do about that?

We have to think less of our country since Trump took power. Building walls and fences, going after defenseless immigrants, sending dog whistle messages to white supremacists and running a completely chaotic White House has suddenly become our new, horrific reality.

It turns out that governing is actually difficult, that running the only superpower in the world is a job that demands incredible ability, discipline and skill. Trump possesses none of these qualities so needed in the political arena.

The real estate developer is finding it tough going in the White House, and his confused immigration policy is just another example of that.

We live in troubled times, where incompetence is key and ignorance is widespread. Yet both of those things appear to be celebrated in the White House.

For those undocumented, Irish or otherwise, this is a very difficult time. But the best advice is not to believe the rumors or the fake news. Contact your local Irish immigration center or reputable lawyer to find out what the real situation is.

These are the times that try men’s souls. But America will prove bigger than the damaging Trump agenda and will rise again in the future.