On This Day: Republic of Ireland Act comes into effect in 1949

The Republic of Ireland Act, signed in December 1948, came into force on April 18, 1949, and ended the remaining statutory role of the British monarchy in Ireland. 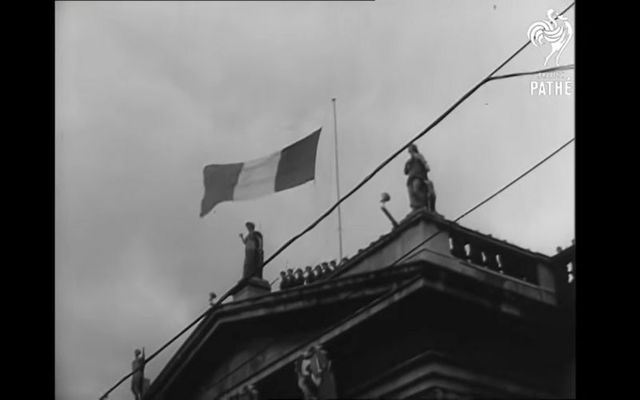 Scenes in Dublin as the Republic of Ireland Act comes into force on April 18, 1949. British Pathé, YouTube

Although many refer to the 1916 Easter Rising or the signing of the Anglo-Irish Treaty in 1921 as the landmark moments in which Ireland gained independence, it wasn’t until some years later that the Irish republic was officially declared and the “Irish Free State” left the British Commonwealth.

Today, April 18, marks the implementation of “The Republic of Ireland Act 1948” and 73 years of official Irish independence.

The Oireachtas (Irish government) passed and signed the act on December 21, 1948, and it came into force the following year on April 18. Taoiseach (Irish Prime Minister) John A. Costello announced the Republic while on a visit to Canada.

The Bill, formally ending the statutory role of the British monarchy in Ireland, came into force in April 1949. pic.twitter.com/zFDXlP9stV

The announcement came as quite a surprise at the time and it is believed that Costello made the sudden declaration about the intentions of the Act because he felt insulted while on the trip and lost his temper. The story goes that a replica of “Roaring Meg” was placed on the dinner table during the visit. “Roaring Meg” was the famous cannon used by the Protestants in the defence of Derry's walls against the Catholics during the siege of Derry in 1689.

By utilizing the powers given them by the British Government under the Anglo-Irish Treaty, the Irish government, especially Éamon de Valera, gradually devised ways in which the Oireachtas could undermine the laws set in place to keep the Irish Free State as a part of the Commonwealth.

Systematic attempts had been made to remove many mentions of the monarch in the Irish political system, culminating in the Irish Constitution in 1937. By this time, the only role of the English monarch in the Irish government was in signing international treaties on behalf of Ireland and signing Letters of Credence accrediting Irish ambassadors to other states.

The Republic of Ireland Act consisted of five sections, the first, and most important of which, repealed the External Relation Act 1936. Under the External Relations Act, the English monarch (George VI at the time) held the role of Head of State in Ireland. Although the position was mainly ceremonial, and the Irish Free State had not actively participated in the British Commonwealth for some years previous to this, the Republic of Ireland Act ensured that there was no longer any official British influence or positions within the Irish government.

The Irish President became the official Irish Head of State on April 18 also. With the repealing of the External Relations Act, the Republic of Ireland Act replaced the now empty seat of Head of State with the role of president, granting the President executive authority of Ireland and its external relations.

The role of the President had been previously established in the 1937 Constitution but its new title would see the president gaining the power of the English monarch and able to act without any British influence. The president was now allowed to represent the state in foreign affairs, accredit ambassadors, and receive letters of credence of foreign diplomats. International treaties were now also signed by government ministers in the President's name.

To celebrate this fact, the President of Ireland of the time, Seán T. O’Kelly, traveled to the Holy See and to France as Ireland’s representative.

The five sections of the Republic of Ireland Act read as :

After years of violence, the official Irish republic was accepted without much of a struggle from the British in the end. They did, however, enact the Ireland Act of 1949, which meant that Irish citizens were not treated as aliens under British nationality law. In other words, we were in some ways still regarded as British citizens. This act is still largely in force.

This newsreel from 1949 shows scenes in Dublin as the Republic of Ireland Act came into effect:

Was the coward of the Titanic really a hero? New book says yes