Molly Maguires: remembering one of the biggest federal executions in US history

20 members of the Molly Maguires were executed in 1887 as part of the largest federal execution in US history. 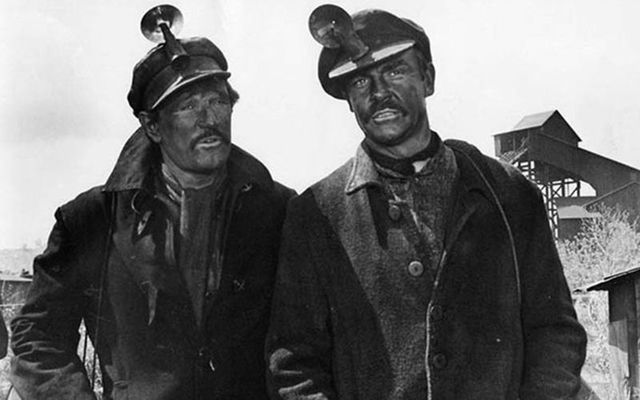 Still of Richard Harris and Sean Connery in the movie "The Molly Maguires": Irish miners hung for fighting back against horrific working conditions.

The last of the Molly Maguires were hanged in the Carbon County Prison in Mauch Chunk, Pennsylvania (known today as Jim Thorpe) on June 21, 1887.

Below, we look at the group execution of Molly Maguire members that would go down in history.

It was one of the largest mass execution of any group by the US federal government in history. Between 1877 and 1879, 20 Irishmen known as the Molly Maguires, a labor movement working and organizing in the Pennsylvania coal fields, were executed. Among them was John Kehoe King of the Mollies who was pardoned fully 101 years later.

What took place back then, according to historian Harold Aurand, was "one of the most astounding surrenders of sovereignty in American history. A private corporation initiated the investigation through a private detective agency; a private police force arrested the alleged offenders; the coal company attorneys prosecuted them. The state only provided the courtroom and hangman.”

The New York Times, however, exulted in the deaths of the Irishmen:

“The lesson taught by the punishment of the Molly Maguires would have been shorn of much of its terror and impressiveness if the energetic and persistent efforts made in behalf of Kehoe, the reputed king of that organization, had resulted in rescuing him from the gallows. If they had even so far succeeded as to have caused his punishment to be commuted to imprisonment for life, the admonitory influence of his fate upon the murderous clan of whom he was the last surviving chief would have been greatly lessened, and the snake of Molly Maguire-ism, of which he was the forked tongue and fangs, might haply have been only scotched, not killed….”

Ignored by the Times was the fact that mine conditions in Pennsylvania mining country were horrendous. As one account has it:

“Wages were low, working conditions were atrocious, and deaths and serious injuries numbered in the hundreds each year.”

Conditions were horrific. On September 6, 1869, a fire at the Avondale Mine in Luzerne County, took the lives of 110 coal miners. The families blamed the coal company for failing to finance a secondary exit for the mine.

The mine owners without one single exception had refused over the years to install emergency exits, ventilating and pumping systems, or to make provision for sound scaffolding. In Schuylkill County alone 566 miners were killed and 1,655 seriously injured over a seven-year period.

Into that hotbed of mine slavery stepped the Molly Maguires, who were mostly Irish emigrants, many having fled the Famine and who belonged to secret societies in Ireland opposed to British rule. King of the Mollies was John Kehoe the Irish-born organizer.

What they found was almost as bad as what they left behind in post-Famine Ireland.

Conditions were terrible in the Pennsylvania mines – safety regulations were non-existent or neglected; breaker boys as young as six worked picking slate; families lived in poor company-owned houses, and were forced to shop at company stores; nothing except a few dollars compensated those injured or the families of those killed in this dangerous trade; and foremen frequently abused workers or undervalued the quantity of coal mined, which determined their wages.

During the Civil War, Irish immigrant miners killed a number of mine supervisors and executives on local draft boards who attempted to induct them into the Union Army. After the war, the violence and lawlessness continued. Northeastern Pennsylvania was in many ways like the Wild West. An isolated region with towns that had few, if any, police and constant conflict between the coal operators and their workers. Disputes were settled by the men who took action.

We may never know whether the Mollies carried out any murders, and what, if any, connections existed among the Mollies, the murders, the local Democratic Party, the Order of Ancient Hibernians, and the union formed in the coal regions in 1868.

What we do know is that Frank Gowen, the ruthless president of the Philadelphia and Reading Railroad, was secretly buying enough mines to gain control of the industry, and had starved miners into submission during the disastrous "Long Strike" of 1875 to break the back of the Workingmen's Benevolent Association. The Mollies, in league with the local Democrats, had their own political machine, which controlled a number of local governments in Schuylkill County.

In the early 1870s, Gowen hired the Pinkerton Detective Agency to infiltrate the Molly Maguires and eliminate the last opposition to his control of the anthracite mines.

For two and a half years, James McParland, an Irish Catholic from Ulster, worked undercover as an informer: working, fighting, and conspiring with his fellow countrymen. After McParland's cover was blown, Gowen himself, serving as the district attorney of Schuylkill County, led the prosecution of the Molly Maguires who were indicted and then convicted largely on McParland's testimony. On June 21, 1877, the last of the Molly Maguires were hanged in the Carbon County prison in Mauch Chunk.

On the wall of the old county jail in what was then Mauch Chunk (today's Jim Thorpe), Pennsylvania, is a handprint that, according to folklore, was made by Alex Campbell, one of four members of the Molly Maguires, executed on June 21, 1877. Insisting he was innocent, Campbell declared that "this is proof of my words. That mark will never be wiped out." And it never has.