Molly Maguires story staged in Ireland for the first time

“Sons of Molly Maguire” will play in Dublin telling the story of the 20 Irishmen accused of being Molly Maguires and executed in 19th-century Pennsylvania. 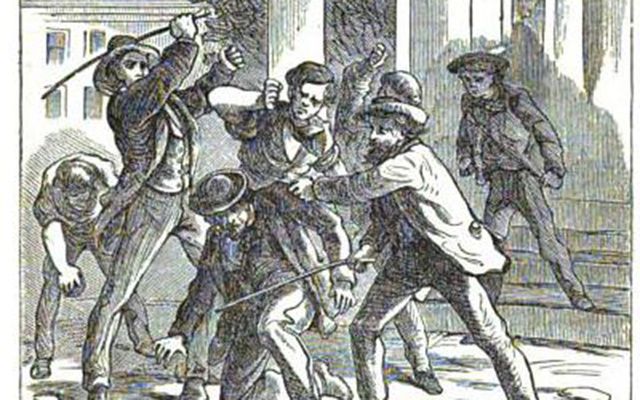 An attack in 1877 on a coal mine owner. Public Domain / WikiCommons

While every Irish school child can tell you the history of the Irish Famine and the death, disease, and immigration it caused, the fate of those Irish people who fled hunger and poverty in the Emerald Isle for the American Dream is a lesser known story.

In particular, the story of the Molly Maguires, a labor movement working and organizing in the Pennsylvania coal fields, is one that lives strong in the memories of many Irish Americans but is a part of the international history of Irish people that is not widely known in Ireland itself.

Their story of oppression, murder, and intrigue will be now be told for the first time on an Irish stage, however, in “Sons of Molly Maguire” by John Kearns which will take to stage at The Liberty Hall and Seán O’Casey Theater for two separate runs in Dublin this coming month.

Written by Kearns and directed by Dara Carolan, this will be the first run of “Sons of Molly Maguire” outside of the United States. The drama previously featured in the Midtown International Theatre Festival in New York City, where it was nominated for five awards, including Outstanding Direction, Lead Actor, and Ensemble.

Set in in the coalfields of 1860s Philadelphia, “Sons of Molly Maguire” tells the gripping tale of the secret society of the Molly Maguires and their battle with the cheating and discriminating mine owners who mistreated the Irish fleeing famine to make a new life for themselves.

“When I was at St. Joseph's Prep in Philadelphia, I came across a book about the Molly Maguires quite by accident,” Kearns told IrishCentral.

“It was fascinating that such a ‘wild west’ story had taken place in Pennsylvania and among Irish immigrants whose experiences I had just begun to learn about.  I ended up doing research papers about the Mollies in both high school and college.

“In 2007, I had written two plays about the Irish and organized crime -- ‘Designers with Dirty Faces’ a comedy about 1930s gangsters and ‘In a Bucket of Blood’ a drama about 1980s Hell's Kitchen gangsters.  So, moving on to my old research topic of the Molly Maguires seemed like a natural progression."

The play follows the fictional story of Jack Kilbride, a young man who pays no heed to his parents' warnings and joins the secret society, exposing himself to the terrorism, immigration, corporate greed, inflammatory media, and corrupt courts of mid-19th century America, all still pertinent issues in modern-day US society.

“Even though ‘Sons of Molly Maguire’ takes place in the 1860s and 1870s, its themes of immigration, biased media, corrupt courts, and terrorism are very relevant to the 21st century,” Kearn continues.

“Writing ‘Sons of Molly Maguire’ also gave me the opportunity to examine how history is created since the illiterate alleged Mollies left no record of their side of the story.”

On June 21, 1877, otherwise known as “The Day of the Rope”, in what is still the largest mass execution in US history, ten men were hanged on suspicion of being members of the Molly Maguires. Among them was John Kehoe, nicknamed the King of Mollies, who was later pardoned over a hundred years after his death.

The deaths of the ten men had come about as a result of two years of undercover work by the private investigator James McParland, an Irish Catholic from Co. Armagh, who changing his name to James McKenna infiltrated the Ancient Order of Hibernians to find out more information about the Molly Maguires.

The secret society at this time was mostly composed of Irish immigrants who had moved from Ireland to work in the Pennsylvanian coal mines. The conditions within the mines did not offer a lifestyle much improved from that which they had left behind, however, and many Irish lost their lives working for uncaring and corrupt mine owners. In Schuylkill County alone, 566 miners were killed and 1,655 seriously injured over a seven-year period.

Facing racism and religious discrimination as well as horrific working conditions, the Irish drifted towards the Molly Maguires and similar organizations in an attempt to unionize themselves for a better standard of living. Using tactics such as intimidation, threats, assaults and assassinations they targeted mine owners, foremen and the police in the name of the cause.

This led, however, to push back from mine owners, in particular, from the ruthless president of the Philadelphia and Reading Railroad, Frank Gowen, who was secretly attempting to gain control of the mining industry in the state.

Hiring McParland himself, Gowen was to act as district attorney of Schuylkill County who would charge the alleged Molly Maguires and execute them on the evidence provided to him by the detective, despite the men protesting their innocence to the end.

As historian Harold Aurand describes it, it was "one of the most astounding surrenders of sovereignty in American history. A private corporation initiated the investigation through a private detective agency; a private police force arrested the alleged offenders; the coal company attorneys prosecuted them. The state only provided the courtroom and hangman.”

“I'm very excited about it,” Kearns said of the opportunity to stage the play in Dublin, explaining that he gave lectures about the Mollies in Dublin in 2013 and 2015 and found Dubliners were quite knowledgeable on the subject and asked insightful questions.

“In many ways, it is still hard to believe.  I'm looking forward to seeing the how Dara Carolan has directed the all-Irish cast, and I believe the Irish audience will have a ready understanding of the cultural practices (like mumming) and bits of the Irish language included in Sons of Molly Maguire.  I imagine the Dublin audience will be open to examining how history is handed down as well.”

“Sons of Molly Maguire” will play at Liberty Hall Dublin on May 10 and 11. For Liberty Hall tickets, email Laura Woods at lwoods@siptu.ie or call 01 - 858 6354. A season ticket covering entry to all MayFest events is available for just 30 euros or 10 euro per performance.

The play will also run on May 16 and 17 in the Seán O’Casey Theater, St. Mary's Road, East Wall, Dublin - http://www.seanocaseycommunitycentre.ie/theatre.html

You can read more about the Molly Maguires here.