Though effectively airbrushed out of Irish revolutionary politics, “The Big Fellow” has filled the silver screen going as far back as 1936. 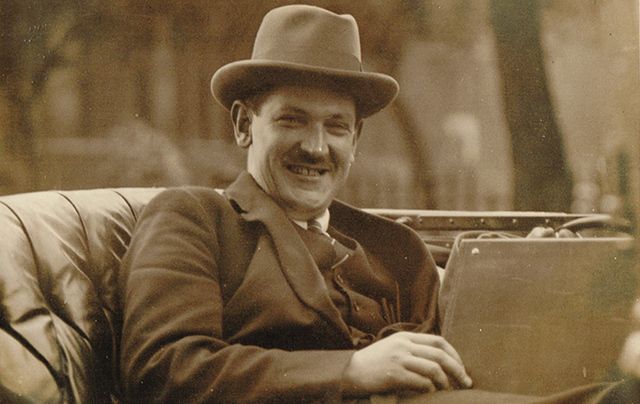 Though effectively airbrushed out of Irish revolutionary politics “The Big Fellow” Michael Collins has filled the silver screen going as far back as 1936.

Irish revolutionary and statesman Michael Collins died in 1922. With the political ascension of Eamon de Valera in the 1930s, he was effectively airbrushed out of Irish revolutionary politics until the 1970s but he was not completely forgotten - especially by Hollywood.

Having lived the most extraordinary, colorful - and dangerous - life in Dublin during the War of Independence, Collins, naturally, made great fodder for Hollywood.

Collins was head of the elite assassination squad, The Twelve Apostles - possibly making him the Jesus Christ of the Irish rebellion - but he also served as a Commandant-General of the IRA, the Dáil’s Minister for Finance, and most importantly, the Director of Intelligence of the IRA. When Winston Churchill placed a £10,000 bounty on his head the British made a legend and created the audacious Dublin Pimpernel.

But first, here is actual film of Michael Collins raising money for the National Loan at Patrick Pearse’s school, St. Enda’s, Rathfarnham, Dublin, in 1919. This film was for promotional purposes in Ireland and the United States:

The first Hollywood film based on a Collinsesque character was "Beloved Enemy," made in 1936, only fourteen years after Collins’ death. Merle Oberon got top billing as Helen Drummond, an upper-class British woman who falls in love with the dashing Dennis Riordan, the Collins character played very lightly by Hollywood veteran Brian Aherne.

Love, not revolution, is the basis to this story and Aherne is a little too lighthearted and cavalier for a man on the run who sleeps in a different bed every night. The interesting thing about this movie is that the love interest comes from the upper crust of British society—not unlike Collins’ apparent lover in real life, Lady Lavery. David Niven plays Aherne’s romantic rival. It’s a picture worth watching, but is based on flimsy history at best.

"Portrait of Jennie" (1948) is one of the strangest vehicles that Michael Collins ever appeared in. In fact, he only makes it as a mural. The plot revolves around a struggling New York artist played by Joseph Cotten who becomes infatuated with a ghost, played by Jennifer Jones. Collins comes into play when Cotten paints a giant mural of the Big Fellow in a Third Avenue saloon to pay his bar tab. The movie is a very odd fantasy, but riveting in its own way, always worth watching. You can watch the whole movie here.

"Shake Hands with the Devil" (1959) is one of the best movies ever made about the Irish revolution. Filmed in Dublin and at the Ardmore Studios in Wicklow, it stars James Cagney as Sean Lenihan who, by day is a medical professor at the College of Surgeons, and by night is a commandant in the IRA. Cagney’s performance is extraordinary.

The best way to describe him is that he’s playing Cody Jarrett from "White Heat" with a brogue. Lenihan is a misogynist of the first rank and his hatred for women plays a pivotal part in his going against the Treaty. Collins, ironically, is played by an Englishman, Sir Michael Redgrave. This Collins is referred to only as “The General,” but it is unmistakably Collins. His hair is combed the same way as Collins combed his and his three-piece suit, tie with collar-pin, is dead-on Collins fashion.

The other tip to his identity is when he announces he is going to London to negotiate the Treaty. The only thing wrong with Redgrave’s Collins is that he is too old. Redgrave was already 50 when he made this movie and Collins died at 31. All-in-all, it is still a superb, exciting movie with scenes shot around Dublin at Trinity College, the Custom House, and the Stag’s Head pub off Dame Street. You can watch the whole movie here.

One of the best films ever made about the Collins-De Valera rivalry was the joint RTE/BBC production "The Treaty" (1991), starring Brendan Gleeson as Collins and Barry McGovern as de Valera.  Gleeson’s Collins is especially believable because he bore, as a young actor, a striking resemblance to the Big Fellow, besides being in the correct age range. The movie explores the intense internecine debate among the three most important players on the Irish side in the Treaty debate: Collins, de Valera and Arthur Griffith (played wonderfully by Tony Doyle). It is a tough, blunt-speaking, believable rendition of what happened in 1921. British Prime Minister David Lloyd George is played to the hilt by Ian Bannen.

Of course, the gold standard for Collins’ movies is Neil Jordan’s "Michael Collins" (1996) starring Liam Neeson. Filmed around Dublin (Four Courts, Kilmainham Gaol) it portrays Collins as a tough, ruthless leader who shows no patience for the weak of heart. Neeson’s love interest is played by a rather homely, uninspiring Julia Roberts, stuck between the romantic aspirations of Collins and his best friend, Harry Boland, played superbly by Aidan Quinn.

The rest of the cast is top-notch, especially the late Alan Rickman’s portrayal of de Valera. Rickman’s strong resemblance to Dev makes his character extremely believable, especially every time he patiently lectures Collins beginning with a very long “My-cal.” When Collins springs de Valera from Lincoln Gaol in England and dresses him up as a lady of the night in a hilarious scene, many Collins boosters will find a lot of truth in the portrayal. One of the peculiarities of the movie is that Brendan Gleeson, the Collins from "The Treaty," plays Collins’ intelligence chief, Liam Tobin. There are several scenes when Neeson and Gleeson are seen together in uniform and at quick glance you think Gleeson is Collins. Neeson, although a little old for the part, gives a bravura performance and captures the cunning and daring of the real-life Michael Collins.

Many say that some of these films glorify the violence that Collins planned and perpetuated on the occupying British forces. One should remember the violence that the British perpetrated on the Irish in a 700-year occupation—which still continues to this day—that included the stripping of culture, the banning of religion, and the imposition of famine. And let us not forget the constant atrocities that happened to the Irish people between 1916 to 1921, such as the North King Street Massacre in 1916 and the rape of Balbriggan in 1920.