Lyndon B. Johnson demanded to be sworn in alongside Jackie Kennedy

Lyndon B. Johnson insisted that JFK’s wife Jackie Kennedy accompany him back to Washington hours after her husband's assassination on November 22, 1963. 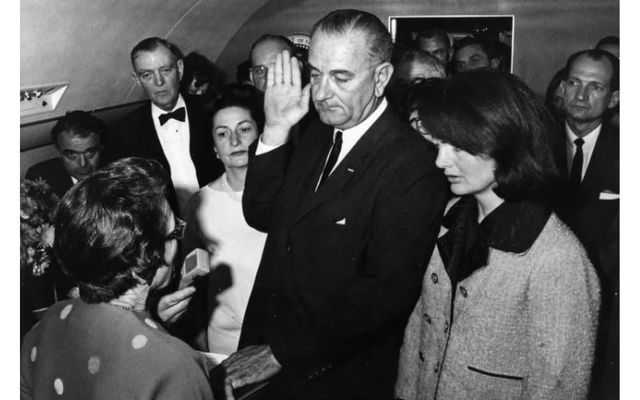 November 22, 1963: Lyndon B. Johnson takes the oath of office as President of the United States, after the assassination of President John F. Kennedy. Getty

Jackie Kennedy stood beside Lyndon B. Johnson as he was inaugurated on Air Force One just hours after President John F. Kennedy's assassination.

Lyndon B. Johnson insisted that JFK’s wife Jackie Kennedy accompany him back to Washington on Air Force One just hours after her husband was assassinated and that she stand beside him in the famous photograph where he was sworn in as president, a new book reveals.

The famous photo of Mrs. Kennedy, with JFK’s blood still on her clothes standing dazed beside Johnson as he took the oath, only occurred after Johnson insisted she be present so that Kennedy supporters accept his legitimacy as president.

Earlier in a scene fraught with tension, Jackie had arrived back at Air Force One thinking Johnson had already departed for Washington on Air Force Two. She entered her stateroom only to find Johnson inside, in one version sprawled on the bed, making plans for the transition.

Johnson and his wife Lady Byrd consoled Mrs. Kennedy and she agreed that she should be present for his inauguration. Asked if she wanted to change out of her bloodstained clothes, she refused, saying, “Let them see what they have done to him.”

The fourth volume of the critically acclaimed biography, "The Years of Lyndon Johnson: The Passage of Power," was released in May 2012. Written by the two-time Pulitzer Prize-winning author Robert A. Caro, the book went on to receive several awards and book prizes. It was also named one of the 10 Best Books of the year by The New York Times.

The book shows how Johnson ignored the wishes of the Kennedy clan that he travel on Air Force Two and that Kennedy’s body arrived back on Air Force One with only family and friends on board as his symbolic last trip as president.

It also details how Johnson called up JFK’s brother Bobby, then-Attorney General, and demanded the legal advice on how to take the oath for president. He wanted Bobby’s approval for taking the oath on the plane, again, to give the act legitimacy. Accounts differ on whether the distraught Bobby Kennedy agreed or not.

Johnson also grabbed two key Kennedy Irish mafia members, Kenny O’Donnell and Dave Powers on Air Force One and demanded they serve in his administration, stating he “needed them more than JFK ever did.” Both men were moved by the gesture.

The book portrays Johnson on the day of the assassination as a politician going nowhere, a former powerful Senate Majority Leader who had shrunk in his new job.

The purpose of the Kennedy trip to Texas had been to heal wounds between Senator Ralph Yarborough and Governor John Connolly who were both vital to Kennedy’s re-election prospects. Johnson, however, was unable to heal the rift between both men and Kennedy had to intervene.

Johnson was also keenly aware that JFK was likely to maneuver to have his brother Robert succeed him in 1968 and that Johnson might not even survive on the 1964 ticket as VP. However, the assassination changed everything.

Johnson heard the shots from the car he was in a few hundred yards behind the president. A secret service agent jumped on top of him and pinned him to the floor while the car was gunned to Parkland Hospital where Kennedy had been taken.

There Johnson was led to a secure room and kept there while the president fought for his life.

Caro describes a man transformed when the news that Kennedy had died reached him.

Both he and the Secret Service were fearful that the assassination was also an attempt to take out the top layer of the American government and that he too was in mortal danger. Johnson instanced the Lincoln assassination when attempts were made on the lives of key cabinet members also.

From being the fumbling, ineffectual Vice President, Johnson became immediately a figure of great authority and decisiveness, Caro writes.

Secret service agents wanted to rush him to the plane but he insisted they wait for Mrs. Kennedy and the president’s body.

The book details how the morning of November 22, LBJ woke up as a deeply frustrated vice president but by nightfall was sworn in as the nation's 36th president following JFK's murder in Johnson's home state of Texas.

"Even in this first hour after John F. Kennedy's death, Lyndon Johnson seems to have had feelings that would torment him for the rest of his life," Caro writes.

"Feelings understandable in any man placed in the Presidency not through an election but through an assassin's bullet, and feelings exacerbated, in his case, by the contrast, and what he felt was the world's view of the contrast, between him and the President he was replacing; by the contempt in which he had been held by the people around the President; and by the stark geographical fact of where the act elevating him to office had taken place."

Caro has been at work on his prize-winning LBJ biography for more than three decades. Politico summarized Caro's presentation of the JFK assassination as follows:

Caro presents a portrait of a man on the verge of transition. ... The day began for Johnson with the belief -- the fear -- that he might not be on the ticket with J.F.K. in the coming election.


That very day, back in Washington, a witness was providing Senate Rules Committee staffers with evidence that he said linked Johnson to Robert G. (Bobby) Baker, the subject of a scandal that had been exploding in the capital, and … Life magazine was mapping out an investigation into the sources of Johnson's wealth.


The Vice-President's trip to Texas wasn't going well: he had failed to heal the bitter rift between two major Texas Democrats, Governor John B. Connally and Senator Ralph Yarborough; the previous day, in San Antonio, Yarborough had refused even to ride in the same car with Johnson. "Given what the President was seeing for himself in Texas -- that Johnson was no longer a viable mediator between factions of his party in his home state -- and what was happening at that very minute in the Old Senate Office Building, the President's assurances that he would be on the ticket might start to have a hollow ring," Caro writes.


Johnson himself, Caro writes, believed that his political career was "finished." Caro details the moments after the shots were fired -- Johnson being flung to the floor of his car by a Secret Service agent who lay on top of him for protection, the tense moments at the Dallas hospital as Johnson awaited news of Kennedy's condition, and the mad rush to get Johnson aboard Air Force One amid fears that the assassination might be part of a conspiracy -- during which an immediate change took place in Johnson.


Jack Valenti said that, "even in that instant, there was a new demeanor" in the new President. "Whatever emotions or passions he had in him, he had put them under a strict discipline," Valenti said, so that "he was very quiet and seemingly very much in command of himself." There had been, in Valenti's words, "a transformation."

Caro has confirmed he intends to complete his LBJ biography with a fifth and final volume.